Breaking Down One of the Scariest Scenes in Horror - Nerdist

Breaking Down One of the Scariest Scenes in Horror

Yep, it’s ya boy Kyle, back on my B.S. talking about a giallo. But this one may be one of the most important of the cycle.Giallo is, of course, the shorthand for Italian mystery thrillers, which increasingly crossed into horror following Dario Argento’s 1970 movie The Bird with the Crystal Plumage. While Argento made three more gialli before breaking into new territory with Suspiria, dozens more European directors made hundreds of gialli in the early 1970s to capitalize on the craze. My favorite such director is Sergio Martino, who directed a string of five gialli from 1970 to 1973. I’ve already written about the twisted plot of The Case of the Scorpion’s Tail and the trippy, Gothic-inspired All the Colors of the Dark, and now I want to talk about the final of Martino’s five gialli: an unintended precursor to the American slasher movie, 1973’s Torso.

Torso had quite a lot of titles, and the English language title is perhaps the most appropriate. It starts by following the typical giallo formula, with a killer murdering people in a swank European townâ€”here the idyllic Italian college town of Perugiaâ€”and an amateur detective tries to figure out who it is. However, Martino shakes things up almost immediately. The murder weapon is a red and black striped ascot rather than a knife or a straight razor, and the killer wears a distinctive white balaclava, presupposing the likes of Michael Myers and Jason Voorhees. The main characters are all beautiful college students, and the amateur detective is one of the women rather than a guy. 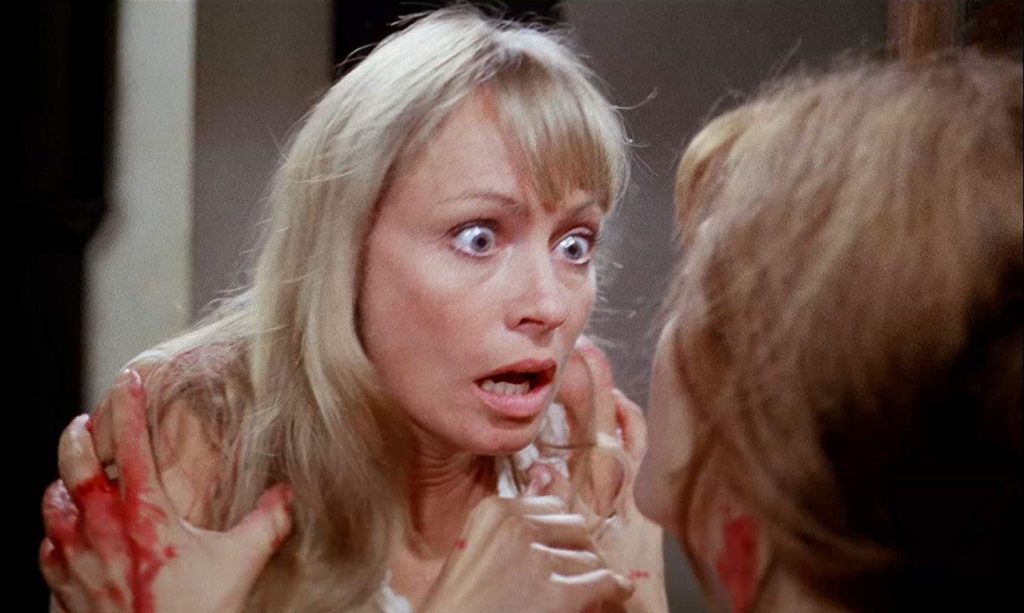 For most of the runtime, it’s a whodunit mixed with scenes of violence. But about two-thirds of the way through the movie, the coeds all decide to leave campus and spend a week in a villa to get away from the danger of the city, only for the killer to follow them. One of the girls, Jane (British actress Suzy Kendall), falls and hurts her leg when the girls arrive and goes up to her room to rest. When she wakes up, she discovers to her horror the killer has broken in and has already murdered all the other girls, and is sawing up their bodies with a hacksaw.This begins a protracted, Hitchcockian game of cat and mouse, in which the wounded Jane attempts first to leave the villa and then get the attention of locals down the hill, all without the killer knowing she’s there. To make the tension last as agonizingly long as possible, Martino cuts back to town where a doctor (Luc Merenda) is investigating. All Jane has to do is somehow get the doctor’s attention. 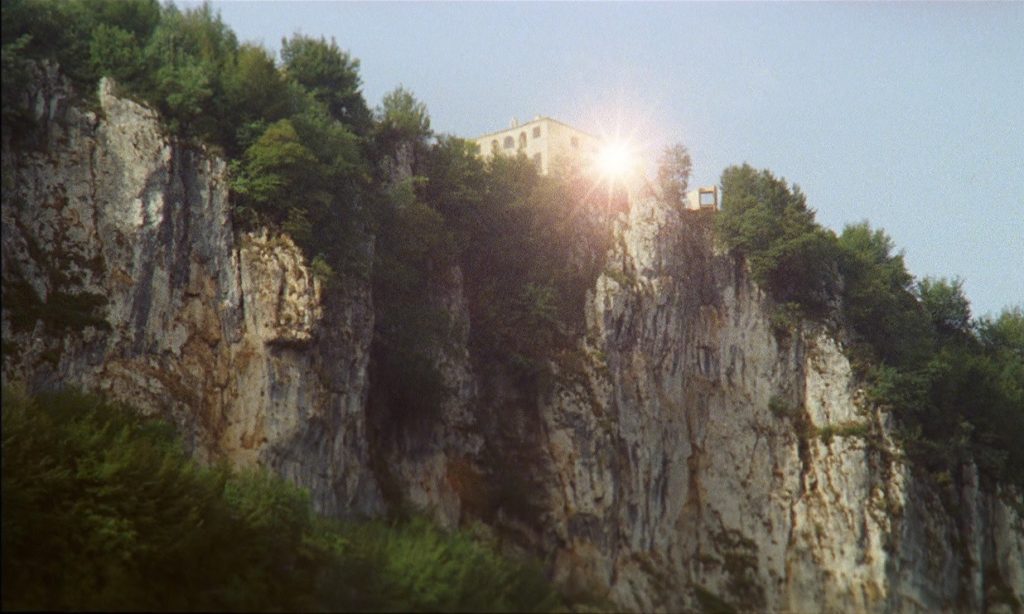 And this then begins what I consider to be one of the best scenes in all of horror cinema, which is just as influential on the slasher movie as Mario Bava’s A Bay of Blood or Bob Clark’s Black Christmas.Jane is unable to leave the villa because the killer has locked the door while he goes outside to dispose of the first batch of the bodies. So she attempts to get the doctor’s attention via a tiny hand mirror reflecting sunlight. This proves fairly ineffective, and time is of the essence. She quickly begins cleaning up her mess, making it seem like no one had been staying in there, throwing everything in a bureau, but as she’s just about finished, she notices she’s not wearing her shoes. They’d fallen off her feet when she ran back up to her room after seeing her dead friends. The killer will know she’s somewhere in the house, and so she goes to get them.Jane knocks over a chair trying to get someone’s attention, and the killer walks up to investigate. Jane hides in the bureau, and luckily, the window bangs in the wind. She’s seemingly off the hook. The killer walks slowly out, shuts the door to the room, and locks it behind him. This is one of those old houses where every door has a key lock, and the key can go in from either side.So she’s stuck. But the killer has left the key in the door facing the other way. Jane thinks quickly and comes up with an ingenious plan: she’ll slide a page of newspaper under the door, then using a hairpin, she’ll push the key out of the hole onto the paper and pull it back to her side of the door. 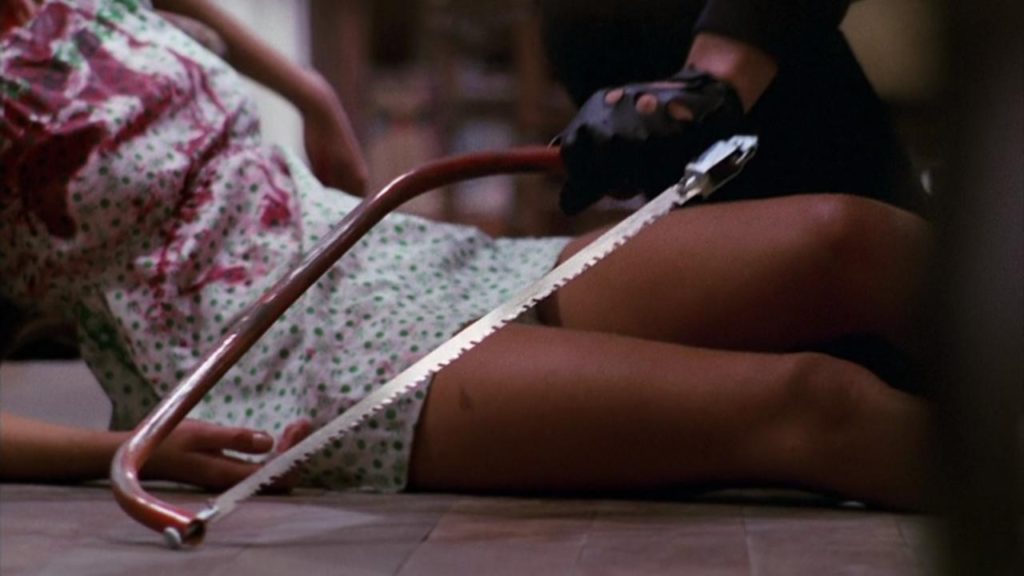 She carefully slides the paper and begins pushing the key. She needs to be quiet, but she also needs to push hard enough for it to fall out. And what will happen when the key falls on the wood floor? She’ll have to worry about that later. She pushes some more, until finally the key falls out the door.The camera then cuts to a shot of the newspaper from the outside of the door…and the key on the floor a couple of inches away from the paper. Jane doesn’t realize she’s failed and begins slowly inching the paper back toward her and just when we think all hope is lost…we know it definitely is.
A black gloved hand comes into frame, picks up the key, and carefully puts it on the newspaper.The audience sits in abject fear, knowing full well what will happen when Jane gets the key. She pulls the newspaper back in. To her mind, she’s triumphed! She’s beaten the killer. And she opens the door, relieved, only to walk directly into that gloved hand and the masked murderer it belongs to.Martino made some terrific gialli, and many of them have better stories or more interesting characters than Torso, but when it comes to pure cinematic suspense and terror, Martino never got better than the last 30 minutes of TorsoÂ and its truly revolutionary switcheroo. 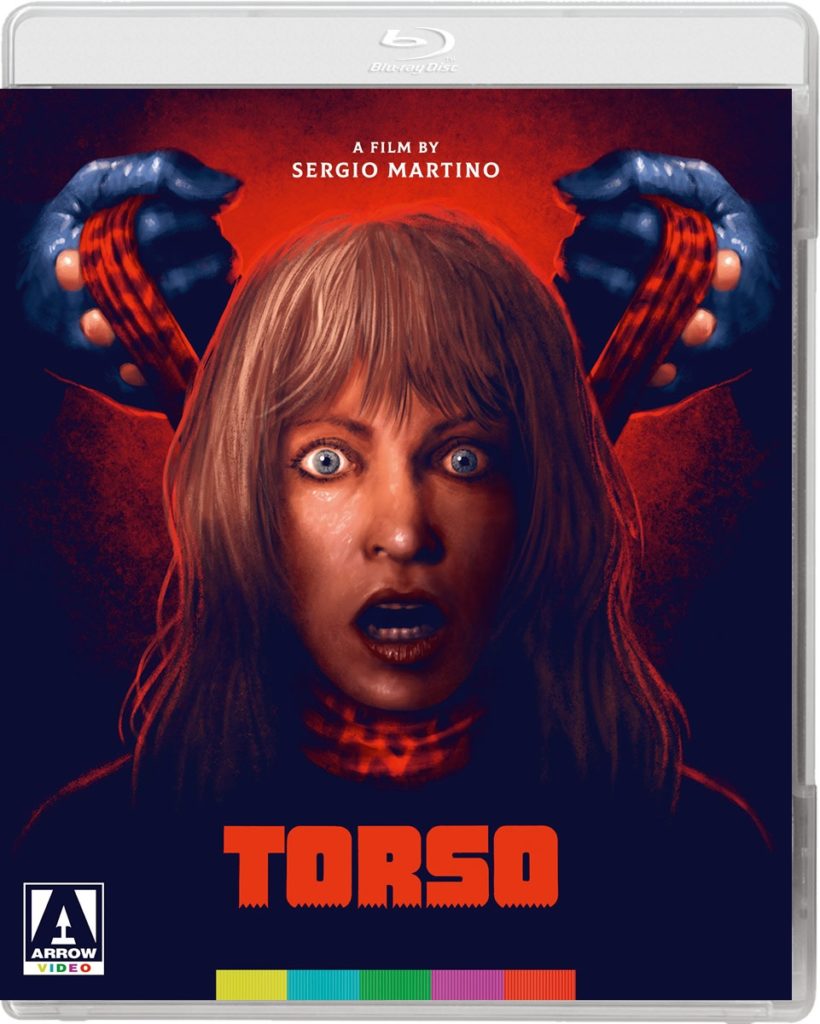 Torso is on Blu-ray now from Arrow Video, who graciously provided us with the above clips. Torso is another in a long line of brilliant giallo releases, with an essential audio commentary from author and film critic Kat Ellinger, an appreciation for the film by author and professor Mikel Koven, and interviews with Martino, Merenda, and screenwriter Ernesto Gastaldi.It’s got a pretty tawdry reputation, but Torso is an absolutely killer horror movie.