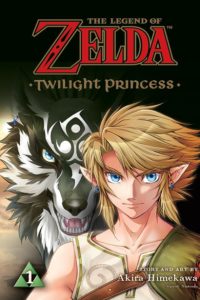 Ten years after its initial release, and hot on the heels of Nintendo’s HD remake of this first Wii-era Zelda adventure, the “Akira Himekawa” manga team finally sinks their teeth deep into Twilight Princess. The creative duo–sharing a pen name, and only otherwise known as “A. Honda” and “S. Nagano”–has of course been reinterpreting almost every entry in the storied game franchise. They’ve crafted manga adaptations of Ocarina of Time, A Link to the Past, and Oracle of Seasons among numerous others. And there’s an intriguing reason why it’s taken this long for a comics version of Zelda‘s biggest seller by them, or anybody else.

According to an author’s note, a comic version of Princess was actually in development for a children’s magazine around the game’s original release. However, it was scuttled due to concerns about “ratings.” The specific wording in VIZ’s handsome translation leaves the particulars to interpretation, but if it was in fact a matter of age-appropriateness, then that fits with the more mature themes at play in this volume.

Himekawa’s take at rendering the shadow kingdom’s macabre menagerie of quirky demons with a kind of mischievous glee, to be sure. However, the depiction of human foibles and feet of clay is where the book really earns its Teen+ rating. Link isn’t a blank cipher for gamers to project themselves into. We meet a reluctant hero who’s so traumatized by a past tragedy, he’s reluctant to simply pick up a sword, even if that refusal offends his community. When a call to adventure comes, Link doesn’t just turn away from it, he pointedly scolds the curious and eager village youths encouraging him to venture forth.

In a powerfully tragic twist, the catalyst for action comes when Link spurns a young fan, inadvertently inspiring the kid to dash into dangers he’s woefully unprepared for. This Link longs to keep living in a bubble, all-too-aware the fragile peace he’s found as a humble farmhand could break at any moment.

The fan-favorite title character, Midna, appears at the front and back of this volume. A prologue shows her fall from grace after an epic betrayal by the palace vizier Zant quite literally plunges her kingdom into darkness. Palace staffers are transformed into statuesque monsters, while Midna is made to live up to her “Twilight Princess” sobriquet in more direct fashion. By the time she reappears, coming to Link’s aide after he’s been rather brutally “disarmed,” the reader’s left with plenty of tantalizing questions about what happened to Midna, and what other intrigue has been bubbling under the surface.

Also, it’s a relief that such plot questions only ever arise within the parameters of the book itself. If you’re a Zelda fan who hasn’t explored every entry in the Hyrule Historia, this manga doesn’t require you to have played Twilight Princess. Or any Zelda game, for that matter. Long-time fans, however, will have a delightful opportunity to not only revisit the game’s narrative, but also delve deeper into its plot than either iteration of the Wii could really allow for.

Have you enjoyed Himekawa’s other Zelda manga books? Are you intrigued about their take on Twilight Princess? Share all your hopes, wishes, and maybe even some fears in the comments.