Why Twilight Imperium Might Be the Greatest Board Game Ever Made

I used to associate the words “game day” with a pleasant afternoon spent with friends, playing various board games while eating, drinking, and being merry. We’d play multiple games that lasted 30 to 90 minutes, with a few 15-minute filler games along the way.

But after playing Twilight Imperium, when I hear “game day” I now think of its literal translation: it’s a day for a game.

How’d I become a card-carrying member of the Twilight Imperium cult? What do other Twilight Imperium: Fourth Edition (TI4 for those in the know) fans think? And what makes TI4 the greatest board game ever made?

Open the box, set up the galaxy, and dive into your very own space opera: a sprawling story filled with alien races, galactic domination, political intrigue, tense negotiations, and epic space battles.

“Other games have also communicated theme through impeccable design but Twilight Imperium is the only game that accomplishes it on this large a scale,” said Matt Martens and Hunter Donaldson, founders of Space Cats Peace Turtles, a podcast devoted entirely to TI4. “The world of Twilight Imperium is there mostly written on the back of the faction sheets, but you understand everything you need to know about the world just by playing. You create your own world every time you play. It’s really, really big, but also somehow still intuitive.”

Players each take the role of a faction attempting to rule the galaxy. Whether it’s the lion-like Emirates of Hacan, the plant beings of Arborec, or one of the other 17 races in the game, your faction will have its own abilities, starting fleet, and other things to help you start your journey. The goal is deceptively simple: score 10 victory points by completing secret and public objectives.

You’ll tailor your strategy to take advantage of your race’s advantages while attacking your opponents’ weaknesses. You’ll attempt to colonize planets, thus gaining resources and influence for later actions. And as you progress as a race you’ll gain technology that will help you rule the galaxy.

A game of Twilight Imperium is not a light affair. It’s not meant to be; after all, you’re trying to rule the universe. Every move you make has a ripple effect on what you and your opponents do. Do you produce more ships in your fleet, spending your precious resources that could be used elsewhere? Do you focus on secret objectives like building up your technologies or claiming systems close your enemies to procure those precious victory points?

Yet within this massive game lies a smooth and elegant infrastructure. Each round consists of players taking one action at a time, spending command tokens for each taken.

There are a myriad of choices, from taking tactical actions to playing strategy cards, which can give your opponents a chance to piggyback on your move by performing an associated secondary action. Every action reverberates within the game. Whether it’s opponents closing in on a common system or trying to complete objectives, what you do matters to everyone involved. 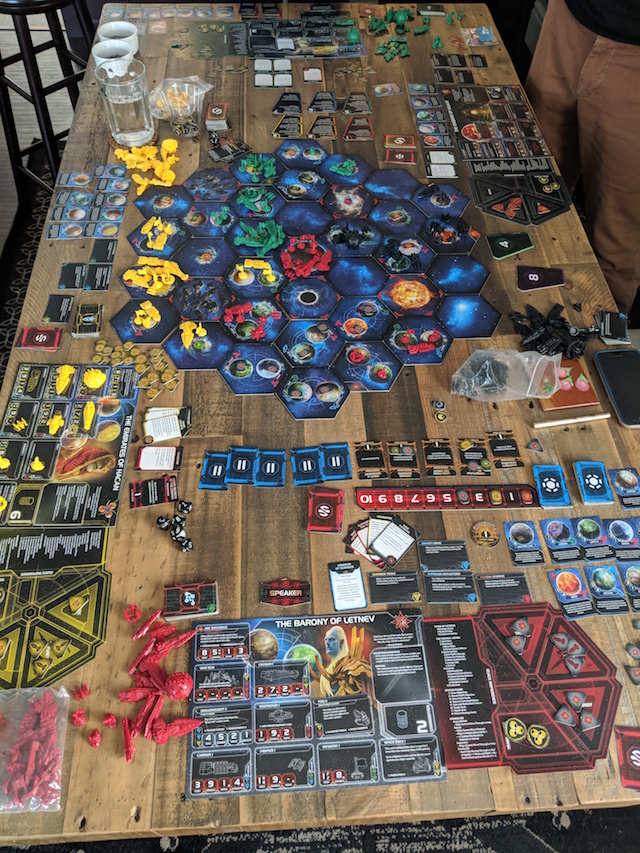 While TI4 is deep, it’s not unnecessarily complicated. When Fantasy Flight Games made the fourth edition, they streamlined several mechanisms thanks to the years of feedback from the game’s fans, adding features from the expansions and smoothing out the rough edges of the base game.

Gameplay is now more straightforward than ever before, yet every decision can be agonizing. And the pressure mounts when a player makes a run at Mecatol Rex.

The former capital of the galaxy, Mecatol Rex, offers a tempting target for every player; when they take it over, they’ll immediately score a victory point. And since they’ll score a point at the end of every round they possess Mecatol Rex, they’ll now have a bullseye on their faction.

Not only does the mood of the game change, but the actual rules change as well. The Agenda phase is now included at the end of each round, with players voting on new game-changing new laws and decrees. You’ll vote using the influence you’ve gathered from your colonized planets. 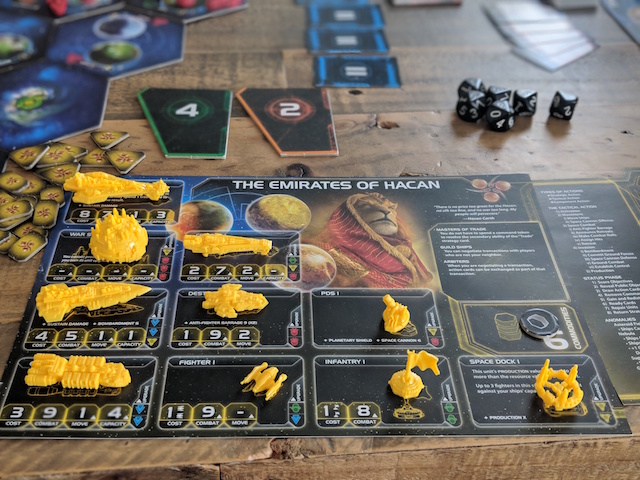 “Verbal interactions and agreements weren’t built into the game mechanically speaking, but the big sandbox nature of the game led to players always trying to convince their neighbors to do (or not do) things,” said Jonathan Wolf, founder of board game website iSlaytheDragon.com (full disclosure: I curate news and write reviews for the site).

“This interaction fosters the feeling of immersion in the world that belongs to you and the other players. You’re not just resolving mechanics to score points; you’re leading an empire that has to deal with the political fallout of snatching a few extra planets or starting a war,” he said. “With the time you spend in game, you’re really invested in what happens to your little empire. Little things in the game become extremely important because you’re committing a lot of time.”

“Fortunately, it’s just as fun to play whether you win or lose.”

A game of TI4 isn’t easily forgotten. You’ll relive your game with your opponents, talking about your successful (or failed) attempt to overtake Mecatol Rex. You’ll remember the huge battle over a resource-rich system where you unleashed your fully operational War Sun onto your enemies. Or you’ll recall the last-minute double-cross that your former allied pulled to score that final victory point.

During our modern golden age of board gaming, there are great games, there are epic games, but there is only one great, epic game. Twilight Imperium: Fourth Edition stands alone in the debate of the greatest games ever, beckoning players to set aside a day for its unique, unforgettable, and one-of-a-kind gaming experience.