For Dungeon Masters, it makes planning game fun. At the table, or in the hands of players at a LARP, it is a handout so breathtaking it helps players subsume themselves in the reality of the game. The book is the fruit of a collaboration between Noble Dwarf Printing, Elven Tower Cartography, and blacksmith Gil Ramirez. Mark Reed of Noble Dwarf said the goal of the project was to produce, “something you could imagine the great libraries of old holding sacred, something worth battling a lich to acquire.” 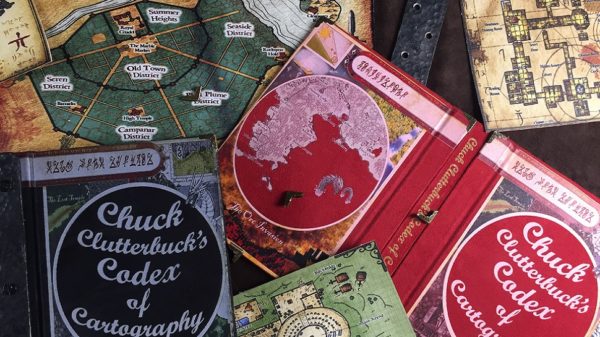 The Handout Makes Stories in Your Mind

Chuck Clutterbuck’s Codex of Cartography takes the RPG handout, and shows how 21st-century ingenuity can make it better than ever.

The role-playing game is a revolutionary form of media. Like a novel or short story, it takes place in the mind, but instead of an author’s written words summoning the story in the reader’s imagination, it is the words of a Game Master and her players that paint the story in each others’ heads. This is, of course, difficult. It’s why boxed text exists in adventures. However, there is another way to help summon the game’s story in the players’ imaginations, and that’s through an in-game handout or player aid.

Call of Cthulhu famously included clues in the form of newspaper articles and diary entries in its adventures, and the Dracula Dossier took the player handout so far that it is an augmented reality game as much as it is an RPG. Lately, the grandaddy of RPG genres, fantasy, has also been getting into the act with amazing handouts for use at the table. The Field Guide to Hot Springs Island by Jacob Hurst consists of the journals and accounts of previous explorers who journeyed to Hot Springs Island.

Now, Noble Dwarf Printing is joining forces with Elven Tower Cartography to produce Chuck Clutterbuck’s Codex of Cartography. The volume contains 40 gorgeous maps for use at the gaming table, or in a LARP.

To call the Codex of Cartography stunning, beautiful, or dazzling is to damn it with faint praise. At Gen Con, your humble correspondent was fortunate enough to hold the volume in his sweaty and envious little hands, and the first thing I have to mention is its weight. It’s was heavy enough that it could crush a kobold. Secondly, the Codex is printed on gallery canvas. You know, the material that Picasso painted on? That’s what Noble Dwarf printed this book on. The very feel of every page of the book removes the viewer from the 21st century and transports you to another time and place.

The maps themselves are full-color, easy to read, and beautiful. Imagine a monastic scribe copying down D&D maps, and that’s what these maps are. They are functional, but aesthetically captivating in their own right.

Oh, and the book is bound with hand-crafted iron binding bars made by Gil Ramirez.

In short, the Codex is a physical masterwork. 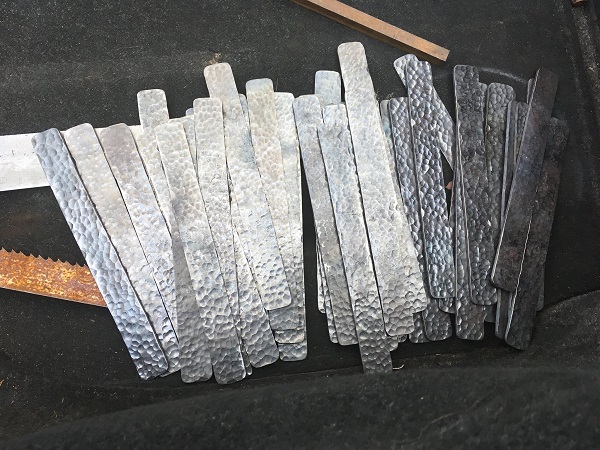 How does an artist go about making maps to places that don’t exist?

Derek Von Zarovich (No relation to Strahd.) of Elven Tower Cartography created the actual maps contained in the Codex. He said of his map-making process:

Since I often include adventure ideas and background lore for my maps, that is where I start. I first imagine a possible plot or adventure idea and start writing about that. Usually I do it with a combat encounter in mind or an interesting location like a town or city. Once I have a clear view of where the lore is going, that’s when I start sketching and drawing. So story comes first… When I begin, I always do a quick sketch of the whole thing. I do this in five minutes and include margins, compass and other graphic elements. This is to get a measure of where everything is going to be in the end. Then I begin. I use a reductive method in which I first start with the linework of main features in the illustration. When that’s done, I continue with smaller details in a different layer, then I zoom in and continue with the next layer of details. I repeat the process for color.

Ben Riggs speaks five languages and has lived in four countries on three continents, but still manages to lose his keys in the bathroom. A friend to human, werewolf, and undead alike, you can discover more of Ben’s thoughts on game, the universe, and everything on Twitter, or on the Plot Points podcast. He’s working on a book about the collapse of TSR in the mid-1990s.

The Best Fantasy Campaign You Haven’t Heard About R...