Tarot Cards Told Him to Start a Game Company: The Dawn of Chaosium - Nerdist

Tarot Cards Told Him to Start a Game Company: The Dawn of Chaosium

Chaosium, a game company founded by Greg Stafford in 1975, is one of the grand masters of the gaming universe. It revolutionized gaming by introducing the first fully realized fantasy world whose qualities were reflected in its game mechanics in RuneQuest, and it published the first horror RPG in 1981’s Call of Cthulhu. The early years of Chaosium impact the games you love to play today.

Greg Stafford would birth a company out of his twin loves: gaming and fantasy. Stafford was bit by the gaming bug when he picked up a copy of Avalon Hill’s U-Boat in 1960. The fantastic seized him in 1966 at Beloit College, curiously a 40-minute drive away from Lake Geneva, Wisconsin where an insurance underwriter named Gary Gygax lived. (An insurance underwriter who would go on to co-create Dungeons & Dragons.) At college, Stafford started writing fantasy stories in a world of his own creation which he named Glorantha.

Glorantha was a bronze-age world of religions, myths, and cults. It truly was a different universe, not sharing even the same cosmology as Earth. (Earth, obviously is in a solar system where it rotates around the sun. Glorantha is a giant flat platter, and the sun and the stars spin around it in 24 hours each day.)

Glorantha was vivid, different, and striking. It wasn’t just a warmed-over middle ages where the hero went on a quest to get the thing and kill the evil. As with everything new, different, and great, Glorantha would face repudiation, failure, and scorn. One rejection letter Stafford received read, “all S&S [Sword & Sorcery] is the same hackwork.”

Stafford’s literary efforts received the most withering of rejections. What would he do now? It being the 1970s, he went and got a tarot card reading. He said of the experience in an interview with Juegos y Dados that the cards told him, “Go get a job, save your money for a year, then found your own company and check back in seven years.”

Stafford then got a job working as an orderly in a hospital. He took every shift he could, scrimping and saving and after a year he had accumulated $10,000. Stafford took that money and founded Chaosium, the word itself a portmanteau from chaos and coliseum. (Stafford lived near the Oakland Coliseum at the time.)

Stafford decided that the first task of Chaosium would be to put the world of Glorantha in front of an audience. In 1975, he used Glorantha as the setting of a wargame, White Bear, Red Moon. The game’s rules would be published on a mimeograph machine that lived in Stafford’s basement.

The game went on to be a success, according to RPG historian Shannon Appelcline, “probably primarily due to its vivid setting and its unique and colorful units.” It was also noted at the time that the game’s rulebook also gave players a window on the world of Glorantha in a way that made it feel alive.

The decades would go on to prove that Stafford’s Glorantha, which was dismissed as hackwork, was instead a vision that would endure.

And in 1977, Chaosium would follow-up the success of White Bear, Red Moon with its first role-playing game.

It was 1974, and Jeff Platt was picking up a bunch of catalogs he’d ordered at the Lake Geneva Printing Company in Wisconsin. Platt noticed another man, bespectacled and bearded, picking up a bunch of boxes featuring a knight riding a horse on the cover. Platt asked what they were, and turned out it was some kinda board game called Dungeons & Dragons. Platt knew a friend of his, Greg Stafford, was really into board games and fantasy, so Platt offered to buy a copy of the game, right then and there. The man, whose name turned out to be Gary Gygax, sold Platt a copy of the game. Platt sent it to Stafford out west in California.

That’s how Greg Stafford came to own the first-sold copy of Dungeons & Dragons. 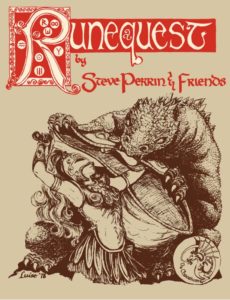 In 1978, Chaosium would release RuneQuest, a role-playing game that both brought Glorantha to the world of role-playing and revolutionized what an RPG could be. The game, designed by Steve Perrin, Ray Turney, Steve Henderson, Warren James, and Stafford himself omitted character classes, an innovation which blew gamers’ minds in 1978. The game also used skills as the basis of the game system. If you wanted to climb a tree, you made a Climb roll. If you wanted to sneak past some guards, you made a Move Silently roll. And each of these skills was listed as a percent. If you rolled under the percentage, you succeeded. While RuneQuest was not the first game to use skills (that was Traveller in 1977) but it went one better by integrating skills into the game’s experience system.

Game designer Jennell Jaquays saw this first edition of RuneQuest at the Origins Game Fair which was held that year in Ann Arbor, Michigan. Jaquays described the game in Hobby Games: The Best 100 thusly:

“For those of us discovering it for the first time that summer, Dragon Pass [the area of Glorantha where RuneQuest was set] and its inhabitants were like nothing seen before. Instead of unrelated groups of monsters lurking amidst ambiguous hex-shaped geography or dwelling in convenient 10′ by 10′ rooms beneath the ground, we discovered a living environment populated by real-seeming peoples of many cultures and races, not all of them human. Monsters had as much reason for existing as the humans who shared their world.”

Numerous supplements followed. The role-playing space was doing well for Chaosium, and so they decided to publish a horror role-playing game.

Horror and mystery were unplumbed genres in the role-playing world when in 1981, Call of Cthulhu broke the seal on both. The game was designed by genius Sandy Petersen, and revolutionized the way role-playing games were written and played. Petersen would become a full-time member of the Chaosium staff.

The game, set in the uncaring, pitiless, universe of HP Lovecraft’s Cthulhu mythos where there is no god, and no devil, but callous and heartless alien entities that regard humanity as utterly irrelevant, reversed the design thrust of Dungeons & Dragons. Instead of characters growing stronger, better, and richer with every adventure, as player characters in Call of Cthulhu learned more about the out-sphere abominations that dominated the universe, they grew more and more unhinged, until ultimately, they would go insane, or perhaps be gobbled up whole by some gibbering shape whose angles were simultaneously right and obtuse. This journey into madness was gamified by the Sanity statistic, which functioned akin to mental hit points.

The game was also the first RPG to have investigation as the primary activity of player characters. Why is there a headless corpse in the Providence Library? What happened to the mayor of Arkham? Why doesn’t my dad want me to visit our extended family in Innsmouth, Massachusetts? Like the readers of the mystery genre of fiction, gamers would find the resolution of such questions engaging and involving. Especially given the horrifying shocks that usually awaited at the end.

Call of Cthulhu made these investigations seem more real by including player handouts. If your character found an important newspaper article, the adventure would have a copy of it for the GM to cut out and hand to her players.

Given its revolutionary mechanics and fresh setting, Call of Cthulhu would go on to dominate the horror RPG field for the next decade, and the 7th edition of the game has given it new life. RuneQuest is still alive and well, and if you want to learn more, check out the Glorantha Sourcebook. Chaosium also just released a translation of the setting for 13th Age.  They are also currently Kickstarting their first Lovecraftian board game in decades, and it’s designed by god of games Reiner Knizia!

What is your experience of Chaosium games? Let us know in the comments below!

Designers & Dragons by Shannon Appelcline was an indispensable source in the writing of this article.