The Best Fantasy Campaign You Haven’t Heard About – Swordfish Islands

Swordfish Islands (which includes a 2017 funded project on Kickstarter) is a fantasy campaign that takes all your expectations of what a fantasy campaign should be and turns them upside down. It’s set on an island where elves have the moral compass of serial killers, and the local ogre tribe is a bunch of runaway slaves trying to live free and get a cold slice of revenge.

The setting is one of death-dealing menaces, merciless wildlife, and bizarre magic items, while the campaign itself is so magnificently organized that it’s a breeze for the DM to run. Oh, and there is a book-length in-game handout for players called A Field Guide to Hot Springs Island which purports to be the journals, drawings, and recollections of other adventurers who defied the dangers of the island and lived to tell the tale. This stunning work for players and the campaign’s fresh take on the oldest tropes of fantasy make it worth checking out. 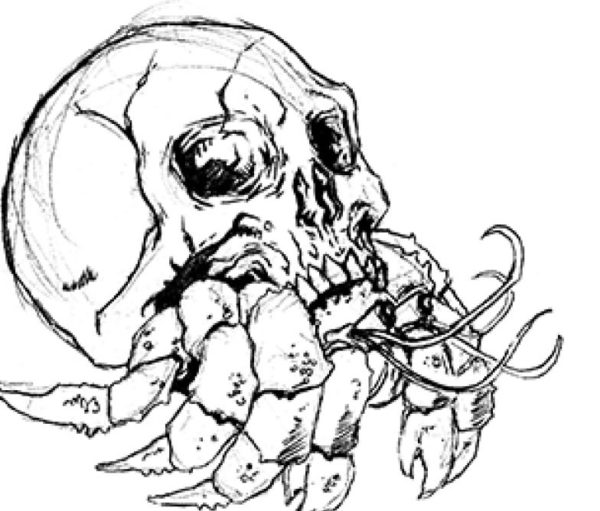 The Hot Springs Island campaign claims to be gunpowder for your tabletop. Your players are the match, and once added, explosions violent and dire will result.

Unbelievably, the campaign lives up to its marketing copy. It is difficult to summarize the density of great ideas packed into the Hot Springs Island campaign. There are 270 locations, seven factions, and 300 unique and “problematic” treasures. But to break the Hot Springs Island campaign into numbered lists is to betray what makes the setting compelling, interesting, fresh, and new. Namely, it is the density of brilliant ideas packed onto the shores of the island.

Let me tempt you with but a smattering of them…

Hot Springs Island sits in the middle of an unnamed sea, an isle thick with menace and mysteries. On a black-sand beach, waves lap the fins of beached whales. The whales huff their last, and die there. Yet strangely, their titanic corpses do not rot. Why?

On the other side of the island, a once glorious city sits, shattered by a cataclysm of unspeakable ferocity. The city was built by elves who used their immortal lives to perfect the quality of cruelty, and the jungle and its denizen have reclaimed the ruins. But what felled the city, and what treasures and terrors did the elves leave within it?

The smoking caldera of a volcano rises about the island’s greenery. There, in a tower of “fire and brass” broods the efreet Svarku. The efreet mines red crystal from the core of the volcano, red crystal which, when on the ethereal plane, became volatile magical fuel. Unfortunately for Svarku, he’s in debt to an interdimensional cartel and his perfect slaves, a tribe of ogres, have revolted against him and taken to living in the jungles and worshipping a god of vengence. How is he supposed to fill his quotas without his slaves? Oh good! Adventurers. Yes yes, come right in. Svarku has need of those in your line of work at the moment… 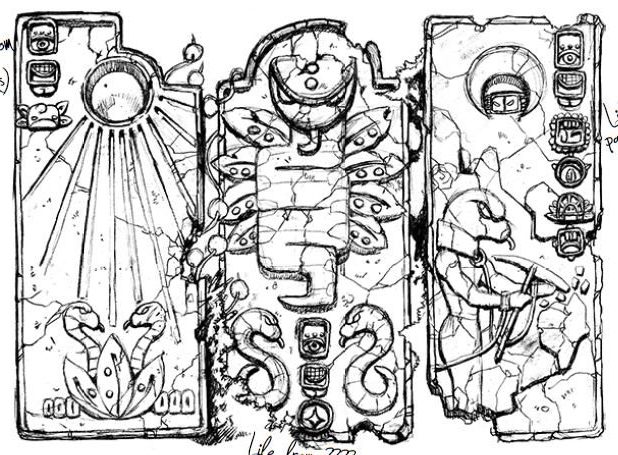 The Campaign Purrs Like an Engine at the Table

In addition to packing enough ideas to fill a few George R.R. Martin length novels between its covers, Hot Springs Island runs like a dream. The campaign was designed to make it graceful and easy for the GM to run with relatively minimal preparation.

The campaign comes in two books, sold separately. The first,  A Field Guide to Hot Springs Island is for players, and we’ll deal with it below. The second book, The Dark of Hot Springs Island, is for DMs. It describes all the secrets and skulduggery that make the island such a delightful locale for adventure. The core of the book is a map of the island covered in hexes. Each hex contains at least three separate items of interest for characters to explore. Furthermore, information on the hexes is provided in two separate locations in the book. Once in detail, and once much more briefly so the DM can quickly scan locations during play. Each location also has a random encounter table, and a few extra special locations have maps (many akin to dungeons) to accompany them.

In practice, what this means is that as the characters crawl across the island, the DM looks at the entry for a hex, describes the dangers and wonders lurking there, rolls on the random encounter table, and voila! A night’s fun is had. For the DM, it’s quick and easy. For the players, the island comes off as a real place, with an ecology, history, and politics all its own. And it’s also deeply immersive because it has…

A Field Guide to Hot Springs Island is the second piece of the campaign. It is a book for players, purporting to be the records of previous adventurers on the island. It provides hints, tricks, and setting material that players will pore over at the table, hoping/praying/begging to identify the thing liquefying the soft parts of their friend’s face. At the table, it’s a fun resource.

But in between sessions, the Field Guide acts as an extension of play. It allows players to study the island, spend more time in its world, and begin thinking about what they are going to do the next time they sit down to game. The Field Guide takes a role-playing game and makes part of it, explicitly, literature. This could be an entirely new genre within role-playing, a genre whose only current examples are Hot Springs Island and The Dracula Dossier.

The book is also a beautiful game object. A half-skull grins from its cloth-bound cover. It has a leather binding, and a golden yellow bookmark. The art inside is stark black and white, often appearing as though it was sketched by hand on the page by some adventurer hastily recording what she saw on the island before fleeing for her life.

Jacob Hurst, one of the creators of the Hot Springs campaign, said that this sort of play extension was the intention behind the Field Guide. Hurst said he remembered how, “When I was 16, if my buddy bought a [D&D] module to run, I’d want to read the module, but I couldn’t because that would ruin the experience.” What could players purchase and read to spend more time with the world while away from the table? The Field Guide was the answer. It also helped that the Field Guide increases the prospective audience of a Hot Springs Island campaign. Instead of only DMs buying books, players could do so as well. 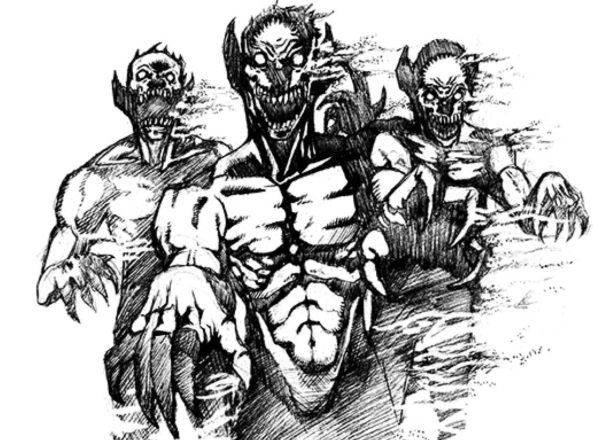 Origin of the Islands

The Hot Springs Island campaign was created by Jacob Hurst, Gabriel Hernandez, Evan Peterson, and Donnie Garcia. In 2011, Hurst noticed the rise of Kickstarter. Game designers could get funding for games upfront. Hurst looked at his gaming group and thought, “We have really good ideas. Gabriel [Hernandez] is a great artist… Other people are doing this. Let’s see if we can do this better.”

Hurst and his group made a change to their gaming schedule. Instead of spending every weekend playing D&D, they took that time and devoted it to world-building. Hurst wanted to create something “for the 15-year-old version of myself.” When he was a teenager, he received a copy of the Planescape campaign setting for his birthday. He wanted to do something like Planescape, with factions and sweep, but make it manageable by constraining the geography. So it was that Hot Springs Island came about. A single island, covered by two-mile hexes, with three points of interest in every hex.

One last point of note. Hot Springs Island is system neutral, so that no matter what system your group runs, or what level your characters are, you can pick up the campaign and use it right now at your table. That said, a conversion of all the monsters to 5th edition D&D has already been done, and is free here!

What’s your favorite fantasy campaign? Let us know on Facebook or Twitter, or in the comments below!

Ben Riggs speaks five languages and has lived in four countries on three continents, but still manages to lose his keys in the bathroom. A friend to man, animal, and werewolf alike, you can discover more of Ben’s thoughts on games, the universe, and everything on Twitter, or on the Plot Points podcast.