WELLINGTON PARANORMAL Is FLIGHT OF THE CONCHORDS' Successor - Nerdist

WELLINGTON PARANORMAL Is FLIGHT OF THE CONCHORDS’ Successor

My expectations for Wellington Paranormal ahead of its North American debut couldn’t have been higher. I waited three years for What We Do in the Shadows‘ first spinoff. That perfect 2014 movie is one of my favorites ever. Meanwhile, while I waited, the second spinoff, FX’s series of the same name, also became one of my favorite sitcoms. And rave reviews for its unseen sibling series only heightened my excitement. Now I’ve finally seen the first two episodes. And it’s as funny as I’d hope it would be. However, despite all my expectations, the show turned out to be something I didn’t expect. Wellington Paranormal features characters from What We Do in the Shadows. But it’s the spiritual successor of another Jemaine Clement show, Flight of the Conchords. 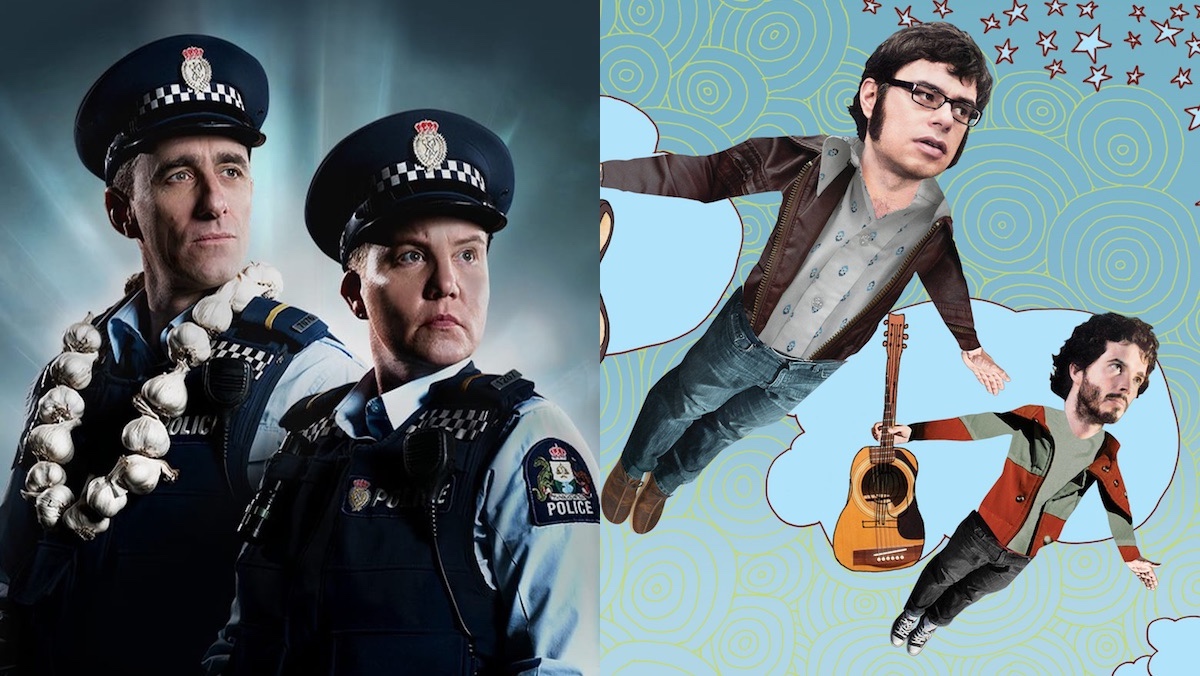 Wellington Paranormal comes from the same duo behind both What We Do in the Shadows, Taika Waititi and Jemaine Clement. (Another reason for my high hopes.) The show features two New Zealand police officers, first introduced in the film, working paranormal cases. No surprise, the show has some of the same comic sensibilities as Shadows. They all treat their absurd subject matter and plots with complete sincerity. There’s no winking at the camera or meta comedy in this cinematic universe. These are “real” stories of ridiculous situations, told documentary style. (Like if Christopher Guest believed in ghosts.) And in all three the humor can be both sharp and blunt, often at the same time. Like how an officer can ask if a spotted UFO instantly becomes an “FO” all while an alien plant sits two feet away.

But Shadows’ main characters, primarily vampires and vampire enthusiasts, are far more over-the-top than Wellington Paranormal‘s stars. Centuries old blood-sucking monsters who lack all self-awareness are inherently more preposterous than polite blue-collar cops trying to do their job as best they can. The two spinoff series also have opposite perspectives. Shadows is a firsthand look at the world of mythical creatures; Wellington Paranormal provides an outsider’s glimpse into that world. With guides who don’t fully understand they are even in a strange place.

Both approaches provide plenty of opportunities for silly fun. Whether it’s a cursed witch’s hat driving the plot on Shadows, or Paranormal‘s possessed talking dog. But Wellington Paranormal‘s humor is much drier than Shadows. Viago, Vladislav, Deacon, Laszlo, Nadja, and Nandor are farcical versions of famous monsters. Their very existence is funny. That they carry themselves with the grace and gravitas of their classic brethren, without having an ounce of either, only makes them funnier. In comparison, Officers Minogue and O’Leary are quiet, well-mannered, down-to-earth humans. The show thrusts them into hilarious circumstances. But they don’t create the inherent comedy of the world they inhabit like the vampires do.

Instead, the two partners are funny in a different way. They’re competent enough to not be total idiots. Professionals who take their job seriously and try to do it well. But they aren’t smart enough, or prepared enough, for dealing with the paranormal. They care. But they’re dumber versions of Mulder and Scully without any qualifications.

That dichotomy—earnestness combined with ineptitude—produces incredible comedy ranging from totally surreal to quietly hilarious. Like the pair running from alien plants who are mocking them in one scene. To them trying to make sense of what’s happening by theorizing a tree grew up around a lazy cow. And yet they might be at their funniest having a normal conversation. As exemplified by O’Leary’s polite attempts to correct the slightly dumber Minogue. What We Do in the Shadows‘ dialogue frequently pulls humor from insults or biting, unsympathetic observation. Wellington Paranormal‘s dialogue gets laughs by dryly commenting on what’s happening without an ounce of cynicism. Even if both shows’ main characters lack any self-awareness.

And that tone is why Wellington’s officers are not like vampires. They’re like Bret and Jemaine from HBO’s Flight of the Conchords. Which Clement also co-created and starred in. And which Waititi directed multiple episodes. The fictional Bret and Jemaine were just competent enough to not be total embarrassments professionally. But inept enough they weren’t actually good. And like Minogue and O’Leary, the Conchords didn’t realize they were overmatched. If Bret and Jemaine had joined the force, they too would have believed they could pull off an exorcism after watching a 30-second YouTube clip. That same type of lovable naivety made the band eminently likable too.

The similarities between the two shows go well beyond their main characters and dry comedic sense though. The third main figure on Flight of the Conchords was the band’s manager, Murray. Rhys Darby’s character tackled his job with the confidence and zeal of someone who knew what they were doing. Despite not knowing what was going on. He also constantly met with Bret and Jemaine in a tiny office that was itself a great recurring joke. But despite his failures, Murray was easy to love too because he cared about the band.

All of which applies to Wellington Paranormal‘s third main character, Sergeant Maaka. He’s emotionally invested in his job and his own employees. But he has the same kind of incomplete understanding of the paranormal as Murray did of the music industry. The relationship between each show’s main duos and their boss are so familiar I was waiting for Maaka to call roll during his meetings.

Flight of the Conchords also had its own surreal universe full of ridiculous characters. Instead of demons and talking plants with unsettlingly large genitalia, it had Mel and Dave. Both just as silly as any paranormal creature. And on Conchords one week a racist grocery cart owner might show up, or a new friend who asked too many questions. Each time it would upend the world of the band. They’d have to solve whatever new crisis came up as a result. Same as Wellington’s polite, unprepared cop duo. And instead of fountains of blood, the Conchords adventures  of the surreal involved imaginary songs well beyond their capabilities.

All of which might sound like a criticism. It might seem like I think Wellington Paranormal borrows too much from Flight of the Conchords, in terms of structure, characters, and tone. But it’s the opposite. I can’t think of a higher compliment than saying the show takes some of the best ideas from Jemaine Clement’s other creations to create something fun and original.

I waited three years to see this show. But if someone had told me Wellington Paranormal wouldn’t just remind me of What We Do in the Shadows, but also one of my all-time favorite shows, I definitely wouldn’t have been able to wait that long as a viewer to say “present.”

TAGGED: Jemaine Clement, What We Do In the Shadows, Flight of the Conchords, wellington paranormal, Taika Waititi