Welcome to the Blumhouse is a fascinating experiment. Instead of traditional theatrical releases, the eponymous movie studio decided to package eight of its upcoming films into double-feature streaming events. Four will air on Amazon this year, with the next four debuting on the streaming service in 2021. The series kicked off this week with the first two films of the bunch: The Lie and Black Box. The next two, Nocturne and Evil Eye, come out on October 13.

To celebrate the releases, Nerdist chatted with the directors of the first four films in Welcome to the Blumhouse about the horror films that influenced them most. 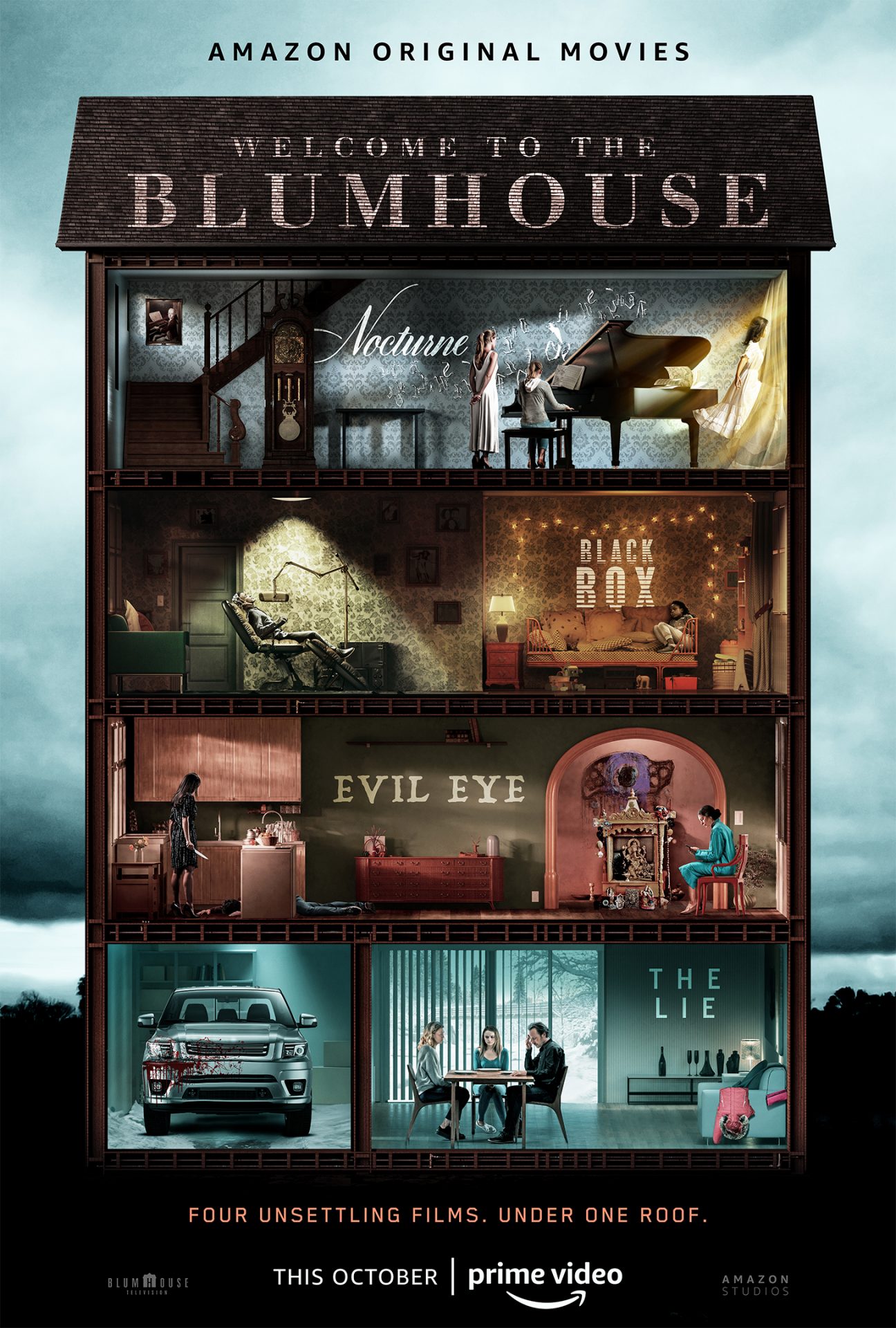 “The thriller Unbreakable has had a huge impact on me as a filmmaker. In fact, M. Night Shyamalan’s film inspired my choice to attend his alma mater, NYU Tisch School of the Arts, for graduate film school. With this film I learned what it meant to be an auteur and to embrace your ‘voice’ as a director. Unbreakable’s storytelling is incredibly assured. Shots are long, quiet, and deliberate yet scenes feel very tense and disturbing. Performances so grounded and subdued that a character’s every action or moment of dialog has weight.

More is said when Bruce Willis or Samuel L. Jackson are silent than when they speak. And the film has this incredibly mysterious, moody, chilling tone about it, and 20 years later the film still holds up. Black Box and Unbreakable are very different films, but M. Night Shyamalan’s film has had a profound impact on how I approached my own film’s tone, shot selection, as well as the patience and intentionality I encouraged actors to have as they brought scenes to life.”

“Let the Right One In, the Swedish vampire film, was a huge influence on The Lie. In particular because both films take place in the heart of winter with snow everywhere in the landscape. We got really lucky when we were shooting The Lie. I was hoping for a very clean, sterile, white-on-white-on-white palette. And the Canadian winter definitely served that color scheme. The interiors were white and sterile, the snow outside the windows [was] white. In this color palette, as with Let the Right One In, anything that contrasts against the white stands out. So in Let the Right One In, the blood really stands out against white snow and white skin. In The Lie, the pink jacket that the dead girl is wearing stands out against the white snow bank. And so [we’re] looking at what really has traditionally been seen as a bucolic type winter scenery, Normal Rockwell, and at the bottom of the screen is the body of a murdered girl. So looking for the sweet and the sour much like what Let the Right One Did In did visually.”

“When I first watched Perfect Blue, I had no idea what I was getting myself into. That’s the only way to see this film: with no expectations. Part Hitchcock, part Lynch, part feminist fever dream, director Kon Satoshi’s deeply psychological debut delves into themes of fan ownership, voyeurism, and marmorialization of the female in pop culture.

It’s also terrifying. Every hand-drawn frame is composed for maximum discomfort, and the film features some truly unnerving visuals. But the most disturbing moments come not from violence (there is plenty), but from the gradual undermining of facts we take for granted. As our lead character tumbles down a wormhole of suggestion and possible delusion, Kon offers his audience little guidance as to what is ‘real’ and what is not. By the end we are left—having been served a plausible explanation for the film’s events—still doubting the reliability of everything we have just seen. This is horror of the deepest kind: the fear of human susceptibility, and the deceptive power our minds wield over us. You’re not watching the nightmare; you’re in it.”

“I’m a control freak. (Like most directors!) I’m most scared of being off-balance, of not knowing what’s really going on in my life. In my favorite horror film of all, Vertigo, Hitchcock goes further by keeping us from even knowing who to root for or even who the protagonist is! We empathize with this guy, Scottie, following this troubled woman, and become wrapped up in his obsession and ultimately their love story. We feel so much for him that we understand when his obsession continues even after her death—until, of course, the rug pull of the movie changes the context of the movie entirely. Everything we thought we knew was wrong.

The appeal of Evil Eye, to me, is our empathy with Usha’s obsession and our sneaking suspicion she might be an unreliable narrator. Is she? Or are we getting wrapped up in her obsession as much as she is? We wanted Evil Eye to keep the ground shifting under the audience so they never knew who to believe. The scariest horror films, like most Hitchcock films, are the ones where you think you know what’s going on—until you don’t…”

“[ Let the Right One In] has informed in some way every film I’ve made since seeing it. It’s the film that showed me the key to horror is empathy, and that showing truth on screen can cross so many different genres and tones. I couldn’t believe how well this worked as a coming-of-age drama, a terrifyingly violent thriller, and a psychological examination of our darker impulses. And through it all, the film focuses on understanding both of these children, and their relatable struggles.

With Evil Eye, we aimed for something similar. We wanted our genres to cross from authentic family drama to dark psychological thriller, to terrifying supernatural horror. But the core of the film is about a mother grappling with her PTSD from being abused years ago—and her abuser, struggling as well with dark urges, and ultimately embracing them. We wanted to understand him just as much as her, though it was important we don’t excuse his actions either. Let the Right One In lets the audience experience horrifying violence, but leaves it to us to judge what’s right. We love that respect for the audience, and hope to always give that respect to them as well.”

TAGGED: Welcome to the Blumhouse