Far be it from me to begrudge anyone their enjoyment of the daily weather report. If you get a thrill finding out whence that cold front will come sweeping in, cling to that thrill. But many dutiful viewers would probably admit that the forecast broadcast could use a little more pizzazz. For years now, networks have braved the occasional endeavor at spicing up their weather segments. But this latest uptick in meteorological madcappery actually resulted from a technical glitch.

On Tuesday, the Minneapolis–St. Paul-based Fox 9’s meteorologist Jennifer McDermed became the subject of a live feed gone awry. (We spotted this charming story over at Boing Boing.) McDermed’s weather report was progressing as usual, when suddenly, the camera indulged in other plans. Onscreen behind McDermed, there appeared an array of other McDermeds—each bigger and blurrier than the last. Instead of losing her cool, McDermed leaned into the chaos, opting to have a little fun with the gaffe. 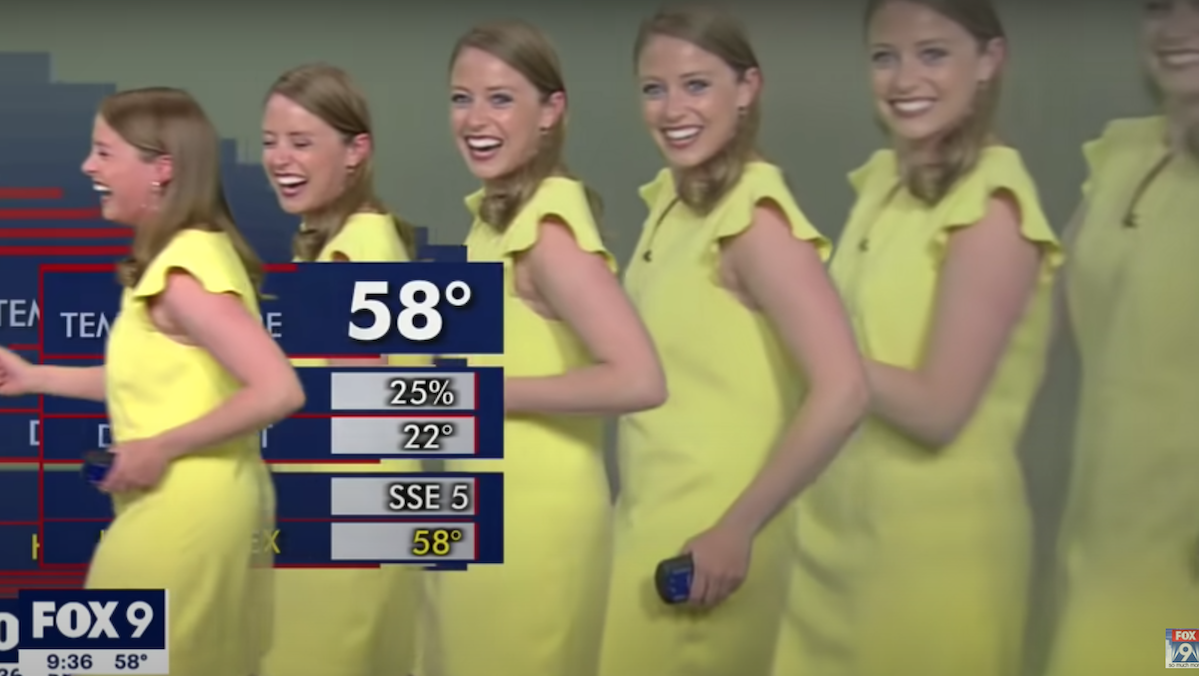 She led her digital doppelgängers back and forth across the screen, resulting in something resembling an Animorphs book cover. The problem resolved before long; and while it was fun while it lasted, that’s perhaps for the best. Much longer could have given way to McDermed’s virtual doubles gaining sentience and deciding to run amok across the studio. Who knows what sort of trouble an endless army of holographic meteorologists could cause!

Who knows, who knows. Such remains a mystery outranked only by that of the weather itself. For, we can do our best to predict and prepare. But we’ll never quite know for sure what turmoils Mother Nature has planned for us. Nor why. Why wreak havoc on your denizens, gods of sky and sea? Are the storms we endure merely payback for the perils we have lain unto the Earth? Yes? Oh. Maybe we should let the camera glitch clones run the show.