Weatherman's Cat Interrupts His Report and Becomes a Star - Nerdist

Weatherman’s Cat Interrupts His Report and Becomes a Star

Watch out newscasters, Betty the Weather Cat is coming for your jobs. Due to stay at home orders, meteorologist Jeff Lyons of WFIE’s 14 News team has converted his living room into his new office. He set up a green screen for broadcasting his weather reports. His cat, Betty, loves attention, and she likes being a part of these reports now that her human is home.

During one of Lyon’s recent reports, Betty walked over demanding to be pet—as is her right. He picked her up, and the rest was history. Now Betty, currently known as Betty the Weather Cat, appears as a  frequent guest on the Channel 14 News weather report. Betty is a beautiful cat and obviously made for the screen. It’s no surprise she’s taken on this starring role with ease and grace.Ever since her debut in early April, fans love seeing Betty in Lyon’s stay at home reports. His ratings have gone up with viewers from Australia, Spain, and England tuning in just to get a glimpse of the cat in action. Lyons recently started incorporating a “ Betty the Weather Cat tracker.” There, he takes a look at who in the world is watching his reports. One report states over 220,000 people had tuned in to that specific broadcast!  Lyons recently told Bored Panda, “Working from home has been an adventure. I have my studio and green screen set up in the dining room. It’s nice to have a 30-second commute after the late news.” Betty will sometimes even get a camera test to make sure her lighting meets her standards before a broadcast. 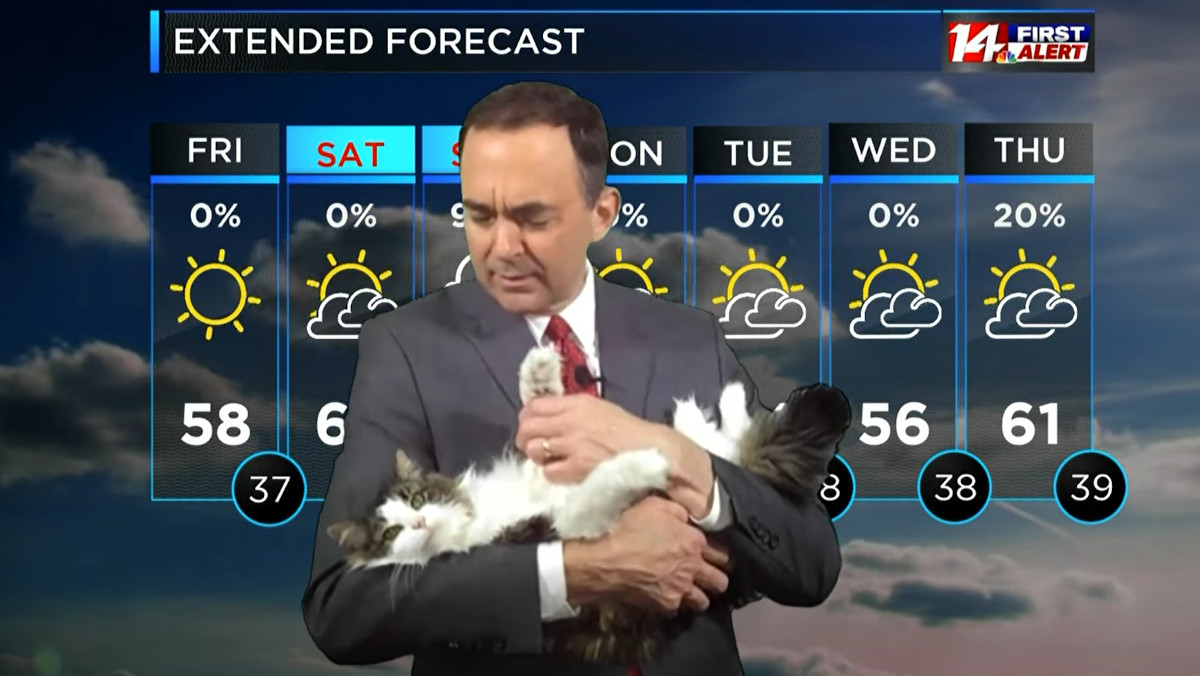 Lyons said, “W.C Fields famously said: ‘Never work with kids and animals.’ I should heed that advice, but I think I’ve been replaced. Maybe the better quote is ‘Claim victory and depart the field.'” Looks like even he’s nervous about Betty the Weather Cat taking his place!

In case you wondered, Betty the Weather Cat is still a star. Lyons has been featuring her in more videos and her fans can’t get enough. Neither can we.