Finally, We Can Run A Marathon In Middle Earth - Nerdist

Finally, We Can Run A Marathon In Middle Earth

Have you always secretly wished that you could visit Middle-earth? Walk around the gardens of the Shire? Take a nice, leisurely stroll through Lothlorien? Sit down and watch some fireworks with Gandalf, while perhaps sharing some pipe weed? Well, what about running a marathon with the Ringwraiths at your back? That still sounds fun, right?

I can’t give you most of those, sadly. But how about a virtual marathon around New Zealand, where Middle-earth was filmed? That’s close enough. It’s the best we will ever probably get, at least until that rumored Lord of the Rings theme park actually becomes a reality. Anyways, I’m pretty sure the ancient poem was suppose to go:

That’s where Make YES! Happen steps in. It’s a virtual-racing platform that lets users create, manage, and offer rewards to people who want to have a fun way to track their exercise distances, while also raising money for charity.

The first race in the series, Journey Through Middle-earth Part I: Escape the Shire is a nice, brisk 52.6-mile virtual race through the green land that Hobbits call home, along the Mangakino River in real life. You can enter in your race data a number of ways: Garmin Connect, Fitbit, Mapmyfitness, Runkeeper, or manually and earn Google Street views of the route. The race costs $35. 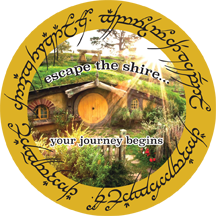 For the first race, participants can pick between the money going to one of two charities. The first, Newborns in Need, provides help to agencies and hospitals that take care of premature babies. The second is Reach Out and Read, which helps distribute books to needy children.

But that’s not all! You also get a cool, shiny, dare I say it… precious medal for your accomplishments. Bling!

Completing each race nets you one of these cool medallions. They won’t make you turn invisible, but Sauron isn’t out hunting for them, either.

There’s even a second event up, the Elven Dash, which takes you through the Misty Mountains as you try to make it to safety in Rivendell by running, walking, or biking through the real-life Kaitoke Regional Park. See, I wasn’t joking when I said you would have to run with the Nazgul nipping at your feet. If that doesn’t help 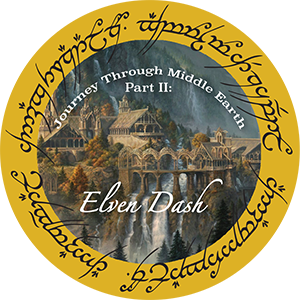 you set a new personal record, I don’t know what will. The Witch-King doesn’t mess around.

Oh, and of course. Another cool medal.

The second race benefits Knotty Girl, which is a group that raises awareness for breast cancer and the importance of breast cancer self-exams in the detection process.

Both races also have leader boards, so you can rope together a little Fellowship of your own and compete to see who would actually be able to travel the furthest without giving in to the temptation of the ring… or giving up and deciding that watching the movies or reading the books is better than living in them. But if you are a Lord of the Rings fan and looking for that extra motivation to get out there and run, then these races may be just what Elrond ordered.

What other Middle-earth locations do you wish you could visit? Let us know in the comments below!

TAGGED: Charity, Lord of the Rings, The Hobbit, running