A few months ago, The Walking Dead intrigued fans with news about season 10c. Since then, there have been tidbits of information about what will happen including a Here’s Negan flashback episode with his wife Lucille and a Caryl adventure. Now, the series is gearing up for its impending return on February 28 with a fresh new trailer for examination.

The episodes will have an anthology feel while also servicing the ongoing story. It’s been hard to grasp exactly how that concept will work considering past “bottle” episodes usually didn’t push much forward. And, forward is the only way to go right now considering the show will end with Season 11 in 2022.

Of course, the short clip doesn’t give us specifics but there are a few very interesting things of note. Maggie Rhee’s son Herschel, who is probably around 8 years old, makes his first appearance ever. He is sleeping peacefully as Maggie tells Daryl about her son asking about his father Glenn’s tragic death. It’s pretty clear that Maggie still wants to see Negan die years later and doesn’t care about his newfound acceptance in the group. There are more glimpses of Maggie’s masked friend with the incredibly cool weapons so it’s likely we will get more information about him (or maybe her) too.

We also catch back up with Yumiko, Princess, Eugene, and Ezekiel as they are beaten and detained by Commonwealth soldiers. Their encounter at the train station was the most recent cliffhanger on The Walking Dead so it makes sense to catch up with them. There’s no glimpse of Stephanie (unfortunately) but we do see Princess appear to stand up on a platform while everyone else is wearing black bags over their heads. Why isn’t she out there with them? Is she double crossing our people? It wouldn’t line up with the comics but anything is possible on The Walking Dead‘s TV show. 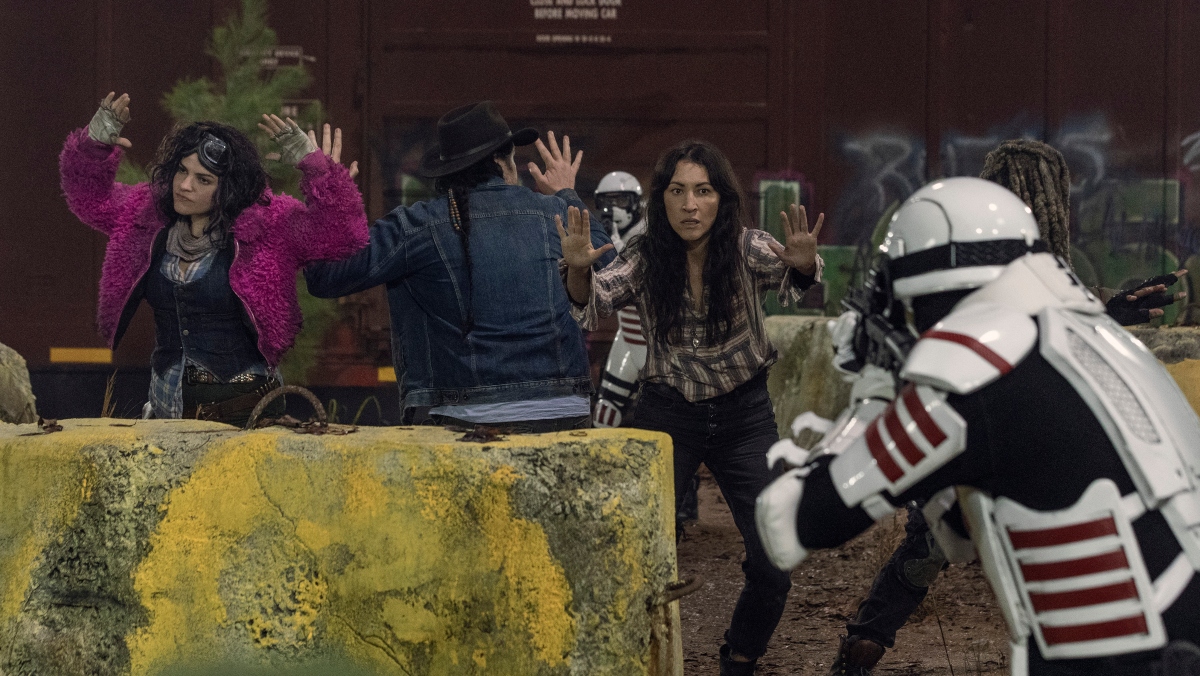 Daryl and Carol make more nebulous appearances. Carol appears to be thinking of running away for the one millionth time while a woman holds Daryl at gunpoint. At first glance she resembles Yumiko but it’s not her…and it wouldn’t make sense for her to threaten Daryl. Aaron is certainly in trouble as he holds a gun to his head under duress. He’s with Gabriel on a mission and everything about it spells danger and trouble. We also see an unknown character dramatically yelling. But we don’t know if he’s a new character in the present or appearing in a flashback. A few people are noticeably missing from this The Walking Dead trailer, including Rosita, Lydia, and Connie.

There are a few looks into Negan’s episode with his wife taking aim at a walker. He also makes a chilling appearance at the very end of the clip with him in his old getup saying “little pig, little pig…let me in.” Overall, the trailer is pretty dark and dramatic which means these episodes will give us hurty feels.

The Walking Dead‘s new chapter looks like a thrilling ride to take these characters one step closer towards their next apocalypse phase.