THE WALKING DEAD Sets Maggie Up for Major Future Stories

Spoilers follow for the latest episode of The Walking Dead

The Walking Dead’s long-awaited season 10 on-time-finale-turned-special-episode finally arrived on October 4. There’s been so much speculation about how the Whisperer war will end, who will kill Beta, and who else will die. Because, honestly, there’s always someone dying in a conflict. But the biggest hype is Maggie’s return to the series. Her resurfacing moment is unexpected, yet matches her signature style of swooping in at the right moment. Bringing her back into the fold sets up so much to explore in upcoming episodes.

If there were a “Most Likely to Die Award” in this episode, it would go to Father Gabriel. His comic death occurs at this point in the story, and “A Certain Doom” starts to hint at a similar fate; his increasingly brave yet risky behavior have all pointed to an ending for him. Gabriel stays behind to defend an escape route for the Grimes kids and several other survivors. He sends them away and stands ready to fight a few Whisperers barreling through a barricaded door. Gabriel ends up pinned down on his back by two Whisperers with a third one ready to stab him. Suddenly, Maggie, Aaron, and the mystery masked person with dual bladed weapons show up to take them all down.

This scene confirms that the masked person is a friend, not an enemy. Unfortunately, the finale doesn’t offer a big mask reveal. But Maggie uses “he” and indicates that they have a close relationship, so he’s likely a member of Georgie’s community, where she has been for a while now. Maggie certainly looks different with a bow and arrow, hat, and a dark jacket and gloves. However, her penchant for being clutch in a deadly situation hasn’t changed at all. 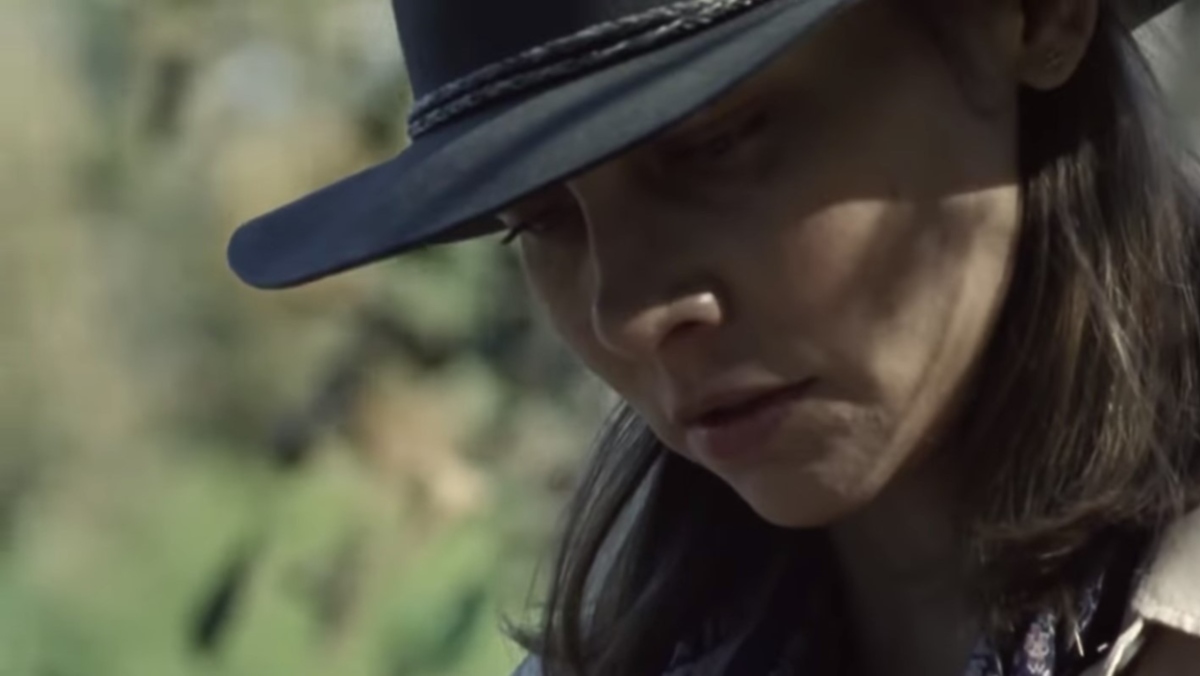 In season two, Maggie literally rode onto the scene with a weapon in hand. She galloped in on a horse and used a bat to knock out a walker attacking Andrea. Maggie also figured out how to take down walkers in riot gear when they were trying to clear the prison. Several seasons later, she came to Rick and Carl’s rescue against Negan. Alexandria was being held hostage by the Saviors when Maggie, the Hilltop, and the Kingdom all led the charge to get things moving for a war. Maggie has certainly made her share of bad choices and mistakes over the years. But she undoubtedly plays such a critical role in The Walking Dead’s overall narrative as someone who will take action, lead, and make tough decisions. Now she’s back with her apocalypse family.

After Gabriel’s initial shock wears off, he quickly comes over to hug Maggie. It’s not clear how long it’s been since they last saw each other but, to many viewers, she’s certainly a sight for sore eyes. She’s one of the few surviving characters from the early days. Her presence brings some familiarity, and even some comforting nostalgia, after so many characters leaving the show in various ways.

Father Gabriel eventually leads them to the survivors meetup where Maggie reunites with Judith, RJ, and Alden. The moment suggests that Maggie hasn’t been around in quite some time. Of course, time is always tricky on The Walking Dead, so who knows how much time has passed since she was last home? She certainly hasn’t been gone for seven consecutive years. But Maggie did miss the entire Whisperer conflict, which we know lasted for over a year, based on changing seasons within the show. 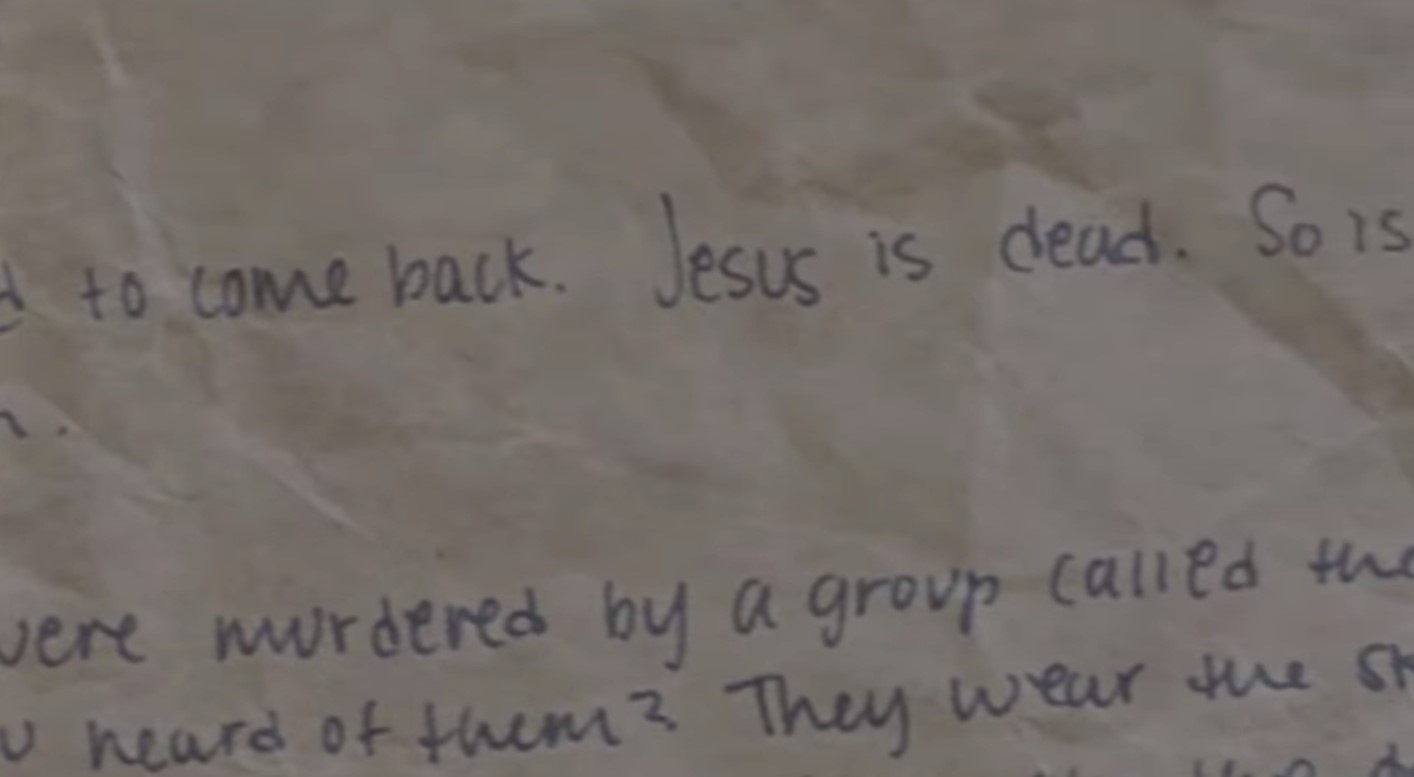 Maggie’s return sets up a few interesting possibilities for her in the final season and possibly beyond. Where will Maggie fit in now? Prior to leaving, Maggie’s guilt over her indirect involvement in Rick’s death caused her to step down as the Hilltop’s leader. Now, the community is defunct after being destroyed in a Whisperer attack. That means it’s highly unlikely that she will try to take on any leadership role there. There’s honestly no need for Maggie to want to resume power anyway. The Coalition is presumably still in tact with leaders like Daryl, Carol, Aaron, and Gabriel still alive.

There’s also no real need to rebuild the Hilltop. The overall numbers from all the communities seems to be quite small. It would make more sense for Oceanside, Alexandria, and the remaining people from the Hilltop and former Kingdom to come together as one. If anything, Maggie will likely stick around to make sure that Alexandria gets back on its feet. Beta brought his horde there after the residents fled, so there’s probably some fixable damage there. Maggie might have a new home now but she surely feels an obligation to help during the aftermath. Her in-depth knowledge of Georgie’s plans for building a sustainable and fortified community would be beneficial.

The announcement about The Walking Dead‘s final episodes initially caused confusion among fans. No one was sure if the extra six episodes from season 10 would simply tack onto a mega-sized season 11 or not. But showrunner Angela Kang recently said in a PaleyFest Fall TV Previews panel that those six extra season 10 episodes are still a separate thing. Kang added that they will dive deeper into specific characterization components. This isn’t necessarily new ground for The Walking Dead, considering episodes like “Here’s Not Here.” In case you forgot, that’s the Morgan flashback episode showing how he got from King County, Georgia, to Alexandria, and what he learned along the way.

The Walking Dead can easily use one or two of these episodes to zero in on Maggie. They can take a step back and show what she was up to in Georgie’s community. If the show wants to keep pressing forward, it could show Maggie coming to terms with what’s happened in her absence. First: Maggie found out about losing Jesus, Enid, and Tara in a letter. Plus: Negan, the man who brutally murdered her husband, is now an accepted member of Alexandria. Maggie certainly won’t be too happy about this new Daryl/Negan pseudo-partnership, and it might put her and Daryl at odds.

Finally: the community she worked so hard to build is no longer functional. That’s a lot to take in and process at one time. Maybe she will go back to the Hilltop and visit Glenn’s grave with Herschel. She may even decide to repair the Hilltop. Either way, Maggie’s story must be explored in some way during these additional episodes.

Season 11 should show Maggie returning to Georgie’s community at some point. Viewers met Georgie and two of her community members, Hilda and Midge, back in season eight. But the show hasn’t given us any more information about them. We don’t know the community’s name, location (outside of it being “far away”), or connection to the greater Dead universe, if any. It’s possible that this place could have some sort of tie with the Commonwealth or the CRM. Season 11 would be a great time to dive into all those questions and more, including Maggie’s role in that space. This also opens the door to learn more about her relationship with the masked man. 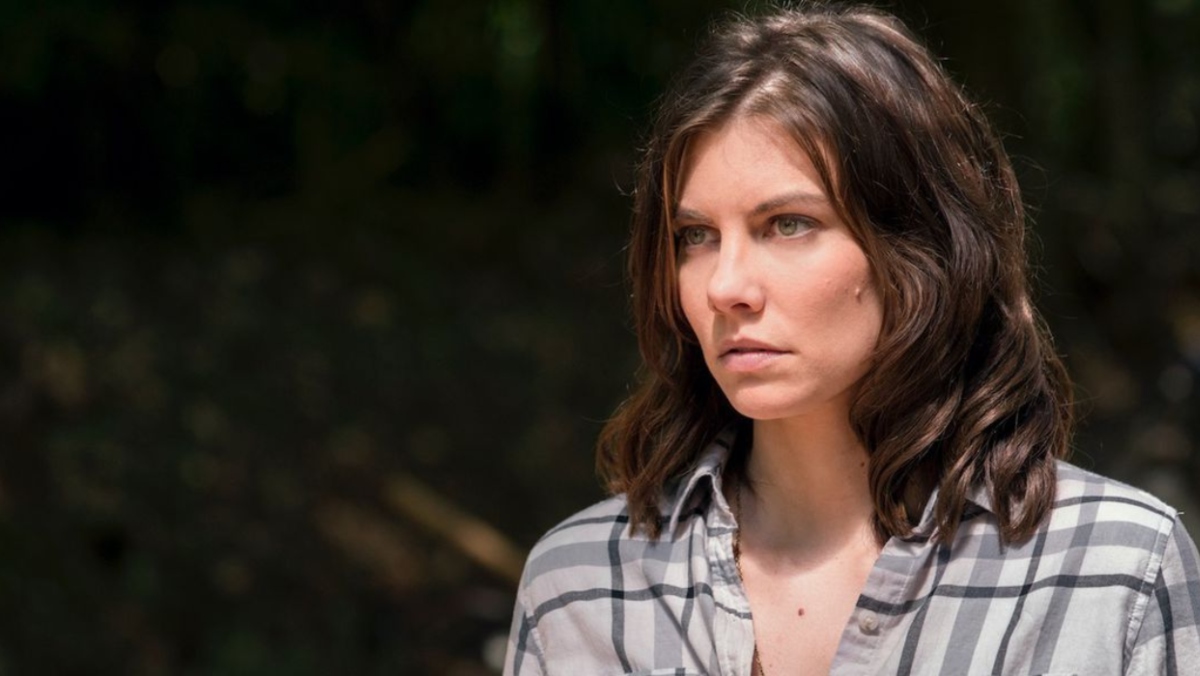 Maggie tends to lead wherever she goes so perhaps she is in a leadership position in Georgie’s community. This would further play into her decision to only stick around the Alexandria area for the short-term. Maggie’s son Herschel has presumably spent more of his life in Georgie’s community instead of the Hilltop. The Rhee family has built a life, connections, and a higher level of stability in that place.

She might also need a few residents help with building up Alexandria, especially Georgie. And, perhaps some of our people will go with her and decide they want to leave the Alexandria area for good. This would be a good way to give certain characters a “happy ending” as the show comes to a close. It would be smart for someone like Rosita to take baby Coco to a place where people are thriving instead of constantly fighting to survive. There’s also the possibility that Maggie returning back to Georgie’s community is how her story will end. She comes in, helps to rebuild, and knows that her place is no longer here.

The show could also decide to follow her comic arc, in which she ends up the Commonwealth’s new president. It’s hard to imagine that Maggie would come back to just die and, if she’s there, why not let some of that storyline play out? Season 11 will focus heavily on the Commonwealth arc, so there should be a way to tie Maggie into it either loosely or in a larger sense. Maggie could also find love once again with Alden or someone we haven’t met yet.

The Walking Dead universe is already set to expand with a Daryl/Carol series and it wouldn’t be surprising if Maggie got her own show as well. Right now, Deadline reports that there are no plans for a Maggie spinoff. This makes sense considering the franchise is trying to wrap up TWD, continue with Fear the Walking Dead, and start new projects like the Tales of the Walking Dead anthology series, the ever-elusive Rick movies, and a Carol/Daryl spinoff. But this doesn’t mean a Maggie show or even miniseries is completely off the table. A lot can change between now and 2022.

In a Kelly and Ryan interview, Cohan hints that there could be spinoff possibilities for Maggie. Plus, announcing a Maggie spinoff right now would kind of ruin any potential suspense with her character in the future. This is the case with Daryl and Carol now because we know that no matter what they face, they will 100% survive the events of Season 11. Honestly, if there is going to be a character spinoff, Maggie’s story makes the most sense.

Maggie is a major character with a lot to explore in her life in a different location with her son. If she takes her comic arc, a spinoff would show how she deals with her responsibilities and future plans. Or, assuming Georgie’s community is separate from the Commonwealth, maybe the show could center on her life and experiences in that space. Both options would be a different take from what we have seen on the current show, which is mostly about trying to survive in smaller communities.

It will be interesting to see how the next chapter of Maggie Rhee’s story unfolds. It may be in a familiar setting or somewhere else in The Walking Dead‘s expansive universe. Either way, fingers crossed for something awesome.