The Murky History (and Clear Commercialization) of Valentine's Day - Nerdist

The Murky History (and Clear Commercialization) of Valentine’s Day

Valentine’s Day is the ultimate day to acknowledge and celebrate various forms of love, specifically the romantic kind. American stores begin to stock their shelves with chocolates, candy, and massive teddy bears as soon as they can move Christmas paraphernalia out of the way. It’s a Super Bowl for card venders, florists, and jewelers as people scramble to find the right gift to express their eternal love. But how did February 14 turn into a commercialized holiday in the United States? Valentine’s Day’s rise to fame is an intriguing trip with lover lotteries, brand building, and more.

Many historians connect Valentine’s Day’s origins to Lupercalia, an Ancient Roman festival held on February 15. The festival (which may have predated Rome) would celebrate the dawn of Spring, a season of fertility and growth; it was also a celebration of Juno, the pagan goddess of love and marriage. People would ward off evil spirits and purify their land, often sacrificing animals at the cave where, according to mythology, the twins Romulus and Remus were breastfed by the she-wolf Lupa. This is where Romulus supposedly founded Rome.

A collection of priests known as the Luperci would preside over the festival with goat and dog sacrifices. Two Luperci would have their foreheads touched with a bloody knife before it was wiped with milk-soaked wool. They would cut thongs from the skin of animals and run nearly naked, striking women and supposedly making them fertile.

Women would be paired off with men via a lottery to celebrate the holiday in ways one would expect. A modern-day Lupercalia reference (albeit a loose interpretation) can be found in The Chilling Adventures of Sabrina season two. On the show, the witches and warlocks are paired together for The Courting, a night of “unholy” abstinence, before giving way to the Hunt, which ends with sex.

There’s also the obvious historical connection to the holiday’s namesake, Saint Valentine. Several accounts about the details about his life and exploits  may even suggest multiple St. Valentines. First, there’s the account of a priest who was imprisoned for ministering to Christians in the third century before Christianity became a predominant religion. He allegedly gave sight to a blind girl and sent her a note signed “Your Valentine” before he was martyred on February 14 in 270 AD.

There are also stories about a Bishop of Terni during that time period. He secretly married Christian couples to help the husbands evade enlistment in Rome’s pagan army. He supposedly cut hearts from parchment paper to give to the men to remind them of their vows and God’s love. Needless to say, this story ends the same way with Saint Valentine’s death on February 14.

Valentine was actually a common name so it’s not impossible for there to be two different men with similar missions. But it could also be various tales about the same man. Either way, this later led to The Feast of Saint Valentine on February 14, which Pope Gelasius used to replace Lupercalia in A.D. 496. All of this provides a basic explanation for how it became a major day.

A Day of Love and the Rise of Commercialization

In the fourteenth and fifteenth centuries, the day started to become associated with romantic and courtly love similar to spring’s lovebirds. Some historians attribute this to Geoffrey Chaucer, an English poet. Around the 1370s or 1380s, he wrote “Parliament of Fowls,” which contains a line about Saint Valentine’s Day being the day for a bird to choose their mate. This inspired nobles to write letters known as “valentines” to their love interests. Around 1599, Shakespeare’s Hamlet makes a direct connection between St. Valentine’s Day and being someone’s Valentine.

Tomorrow is Saint Valentine’s day,
All in the morning bedtime,
And I a maid at your window,
To be your Valentine. -Ophelia 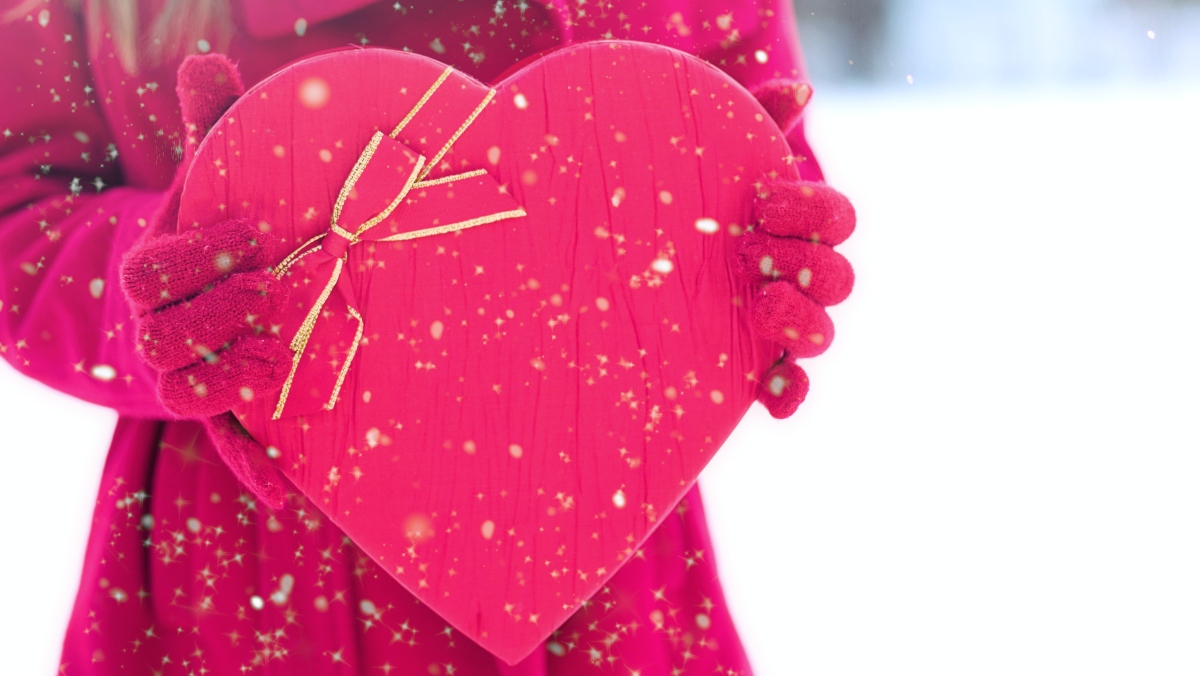 A poem in Gammer Gurton’s Garland (1784) includes the classic lines about red roses and blue violets. This could have influenced the association of red roses to the holiday.

“The rose is red, the violet’s blue,
The honey’s sweet, and so are you.
Thou art my love and I am thine;
I drew thee to my Valentine:
The lot was cast and then I drew,
And Fortune said it shou’d be you.” 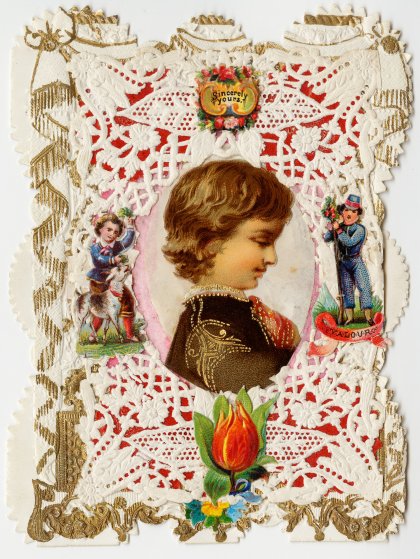 In the 1840s, Esther A. Howland began selling Valentines in America in mass quantities, earning her the moniker “Mother of the Valentine.” Her cards would feature lace, ribbons, and pictures, and were a cheaper option than importing cards from overseas. This sparked a steady uptick in Valentine’s Day merchandising in both America and England; Cadbury’s (a British company) introduced a heart shaped box of chocolates in the 1860s.

The infamous conversation candies (pieces of candy with lovey/flirty phrases) were developed in 1866 by Daniel Chase, the brother of New England Confectionery Company founder Oliver Chase. He wanted to compete in the growing Valentine’s Day market by making his own lane. The candies did not become heart shaped until around 1902.

Around 1873, Milton S. Hershey started his first candy shop in Philadelphia. His consistent study of confection making, particularly chocolate and caramel, led to founding of Hershey Chocolate Company (Hershey’s) in 1894. The company struck sweet gold in 1907 with Hershey’s Kisses, a candy now synonymous with the day of love. Hallmark Cards (founded in 1907) sold Valentine’s Day gift cards in 1910; however, the decline in postcards’ popularity led them towards the creation of Valentine’s Day cards in 1913. 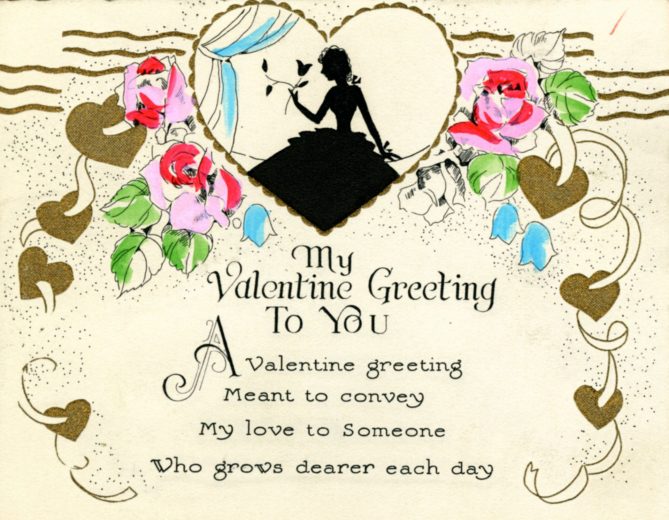 Of course, there was pushback to the holiday’s rapid commercialization. Similar to anti-Valentine’s Day sentiments today, many people thought that the push to buy mass-produced gifts in honor of love defeated the holiday’s overall purpose of creativity and celebrating love on an individual scale. Either way, the commercial rush for gifts continued to expand in subsequent decades with print advertisements for chocolate and gift ideas.

Major companies like Coca-Cola, Whitman’s, and Hallmark competitor Norcross pushed everything from cakes to pajamas to sexy nightclothes for an easy holiday cash grab. Famed diamond company DeBeers also launched its “a diamond is forever” campaign in 1948 to connect quality jewelry with an expression of love.

Valentine’s Day fell at a perfect time to entice viewers who had finally built back up some post-Christmas reserves. As expected, promotional materials heavily centered on white heterosexual couples or white women. Those that did feature people of color didn’t even use actual human beings, instead leaning towards caricatures depicting harmful and racist stereotypes.

The TV Years and Beyond

Interestingly, the rise and popularity of TV in the 1950s through the 1970s didn’t seem to have a profound effect on Valentine’s Day. It wasn’t until the 1980s when companies like Hallmark began to really put stock into V-Day commercials. This 1985 commercial is exactly what you’d expect from a cheesy advertisements during this time; however, it was reflective of shifting social attitudes with some diversity (and no blatant racism) in the mix.

In 1986, Hersey’s Kisses began to lean more into love day by offering candies in pink and red foil. In the years since, Valentine’s Day has become one of the most commercialized holidays in America. It’s the subject of TV episodes and films and even the inspiration behind YouTube, which was founded on Valentine’s Day 2005 as a dating website. And Hallmark further capitalizes on the holiday with an entire TV channel playing cheesy love movies.

There is paraphernalia for everyone in a person’s life, whether its friends, lovers, enemies, or pets. Companies are leaning into social media marketing as streaming services curate content for those who can’t get enough of romcoms or dramatic love stories. Annoying as the marketing bombardment may be, it has made significant strides in recent years. Now, people from different racial/cultural backgrounds and non-heterosexual romantic relationships are in advertisements and on cards, too.

According to WalletHub, people will spend an average of $164.76 for Valentine’s Day 2021; this equals a total spending of almost $22 billion. Hallmark will offer approximately 491 different types of cards in its stores, leading the pack for sentimental valentines. Long gone are the days where the majority wrote heartfelt letters or simple gifts. Hate it or love it, Valentine’s Day is here to stay and probably won’t get any less commercial any time soon.