Sick of sweet and saccharine Valentine’s Day tie-ins? Don’t want to waste your money on pink and pastel candy colored tchotchkes that don’t last past February? Then you’re in luck as Mezco has revealed a very exciting pre-order for this cute and creepy Living Dead Doll set featuring none other than Chucky and Tiffany Valentine! 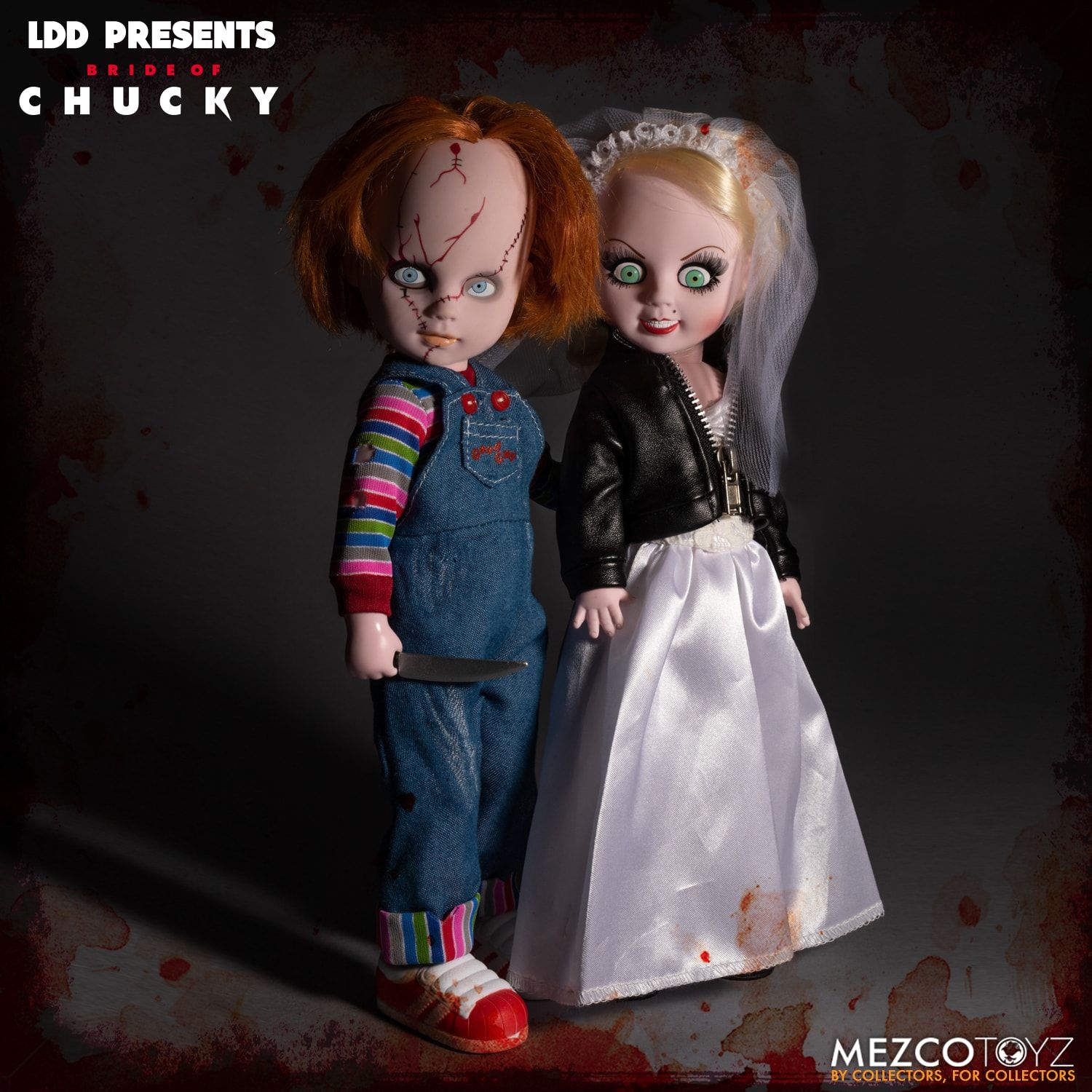 If you were even goth-adjacent and grew up in the ’00s you were likely aware of the Living Dead Doll craze which centered around creepy and cute horror-themed dolls. Some of the most popular additions of the dolls were themed around famous genre characters like Freddy, Jason, Frankenstein, The Bride, and Chucky and Tiffany. In recent years the brand has stayed strong with special editions like Sabrina from Chilling Adventures, Annabelle, and even La Llorona. With Chucky and co. headed back to screens in Don Mancini’s Syfy series it’s the perfect time for the rerelease of this iconic and devilish duo! 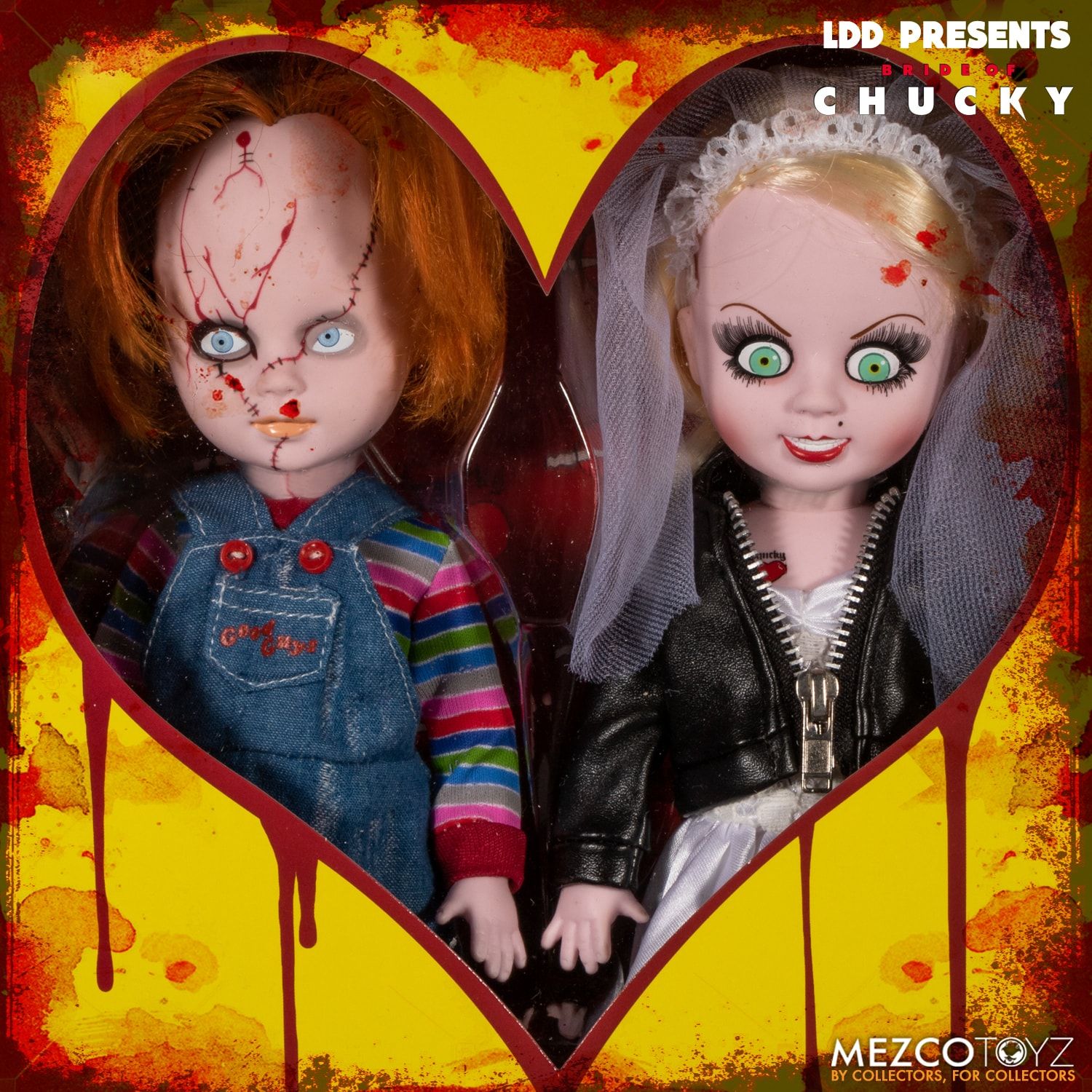 In case you don’t know the story behind Chucky, his badass girlfriend, and their iconic place in horror history then here’s a little primer. He first appeared in Tom Holland’s—the horror filmmaker, not the current MCU Spider-Man—astoundingly creepy, strangely magical, and wonderfully unique ’80s slasher Child’s Play. It’s the film that launched a franchise so strong it’s still going 30 years later. All little Andy Barclay wants is a Good Guy doll, but when his mom buys him one down a dark alley they both get more than they bargained for as the doll is imbued with the soul of a serial killer. Incredible casting, witty writing, and bleak humor make Child’s Play a stone cold cult classic. Jennifer Tilly’s Tiffany joined in the brilliant late stage entry to the franchise, Bride of Chucky, where she played the girlfriend of Charles Lee Ray who was also magically transformed into a doll via that old voodoo magic. She quickly became a series stalwart and a fan fave character who proudly stands along side Chucky as a camp horror icon!

You can find out more about this awesome pre-order right here. “Till death do us part! Back by popular demand, LDD Presents Chucky and Tiffany. Chucky—the homicidal doll who contains the spirit of Charles Lee Ray, a serial killer better known as “The Lakeshore Strangler”, is now joined by his beloved Tiffany—the doll who contains the soul of his longtime paramour, a misguided and equally homicidal aspiring actress. Chucky sports his signature ‘Good Guys’ overalls and comes complete with a butcher’s knife that he can hold neatly in his right hand. Tiffany wears a leather jacket over her bridal gown and comes with a removable veil. Chucky and Tiffany stand 10″ tall and feature 5 points of articulation. They are packaged together in a window box, perfect for display.” The dolls are expected to ship between May and July so you’ll have time to prep your home for the new arrivals.

Get yourself a Valentine’s present and preorder your Chucky and Tiffany right now!