On February 9, a number of travelers received a special Martian stamp on their passports. No, they didn’t touch down on the Red Planet. Rather, they were entering the United Arab Emirates (UAE) right here on Earth. The special passport stamps, featuring “Martian ink” were in celebration of the UAE’s first mission to Mars. Over the summer, UAE launched its first unmanned mission to the planet with the Hope orbiter, which, on February 9, successfully entered Mars’ orbit on its first attempt. 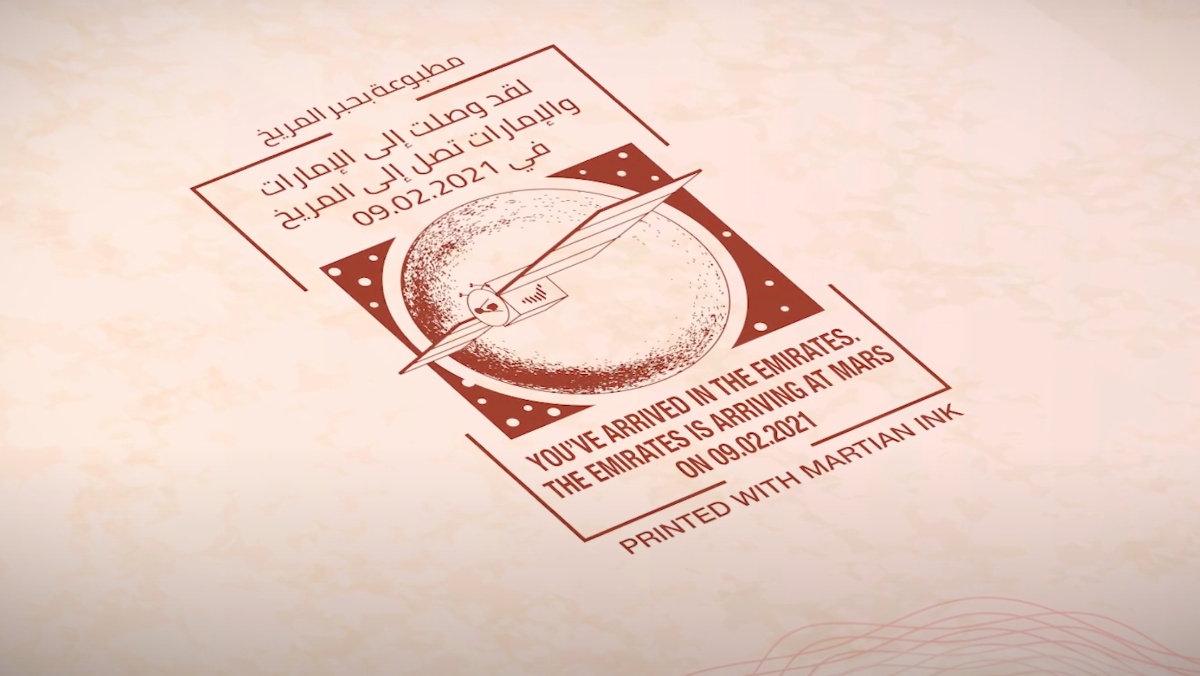 To celebrate the major achievement, all visitors arriving at UAE airports received the commemorative stamp on their passports. The stamp, which we first learned about at DesignTAXI, features the spacecraft Hope orbiting Mars and a small caption reading, “You’ve arrived in the Emirates. The Emirates is arriving at Mars on 09.02.2021.”

And, of course, the stamp features some pretty special red ink. They crafted the ink from Basalt, the same kind of volcanic rock found on Mars. Basalt is also located in certain places on Earth. The UAE gathered these particular rocks during a special expedition to the Fujairah Mountains and Sharjah’s Mleiha Desert. According to the Government of Dubai Media Office, the rocks were “then crushed into a fine paste, dried in the sun, and mixed with adhesives to create three separate colors that represent the Red Planet—ready for stamping into the passports of thousands of visitors.”

As CNN notes, Hope probe’s successful entry into Mars’ orbit makes the UAE the first Arab nation, and fifth space-faring entity to reach the planet. (China became the sixth when it’s China’s Tianwen-1 probe entered Mars’ orbit on February 10.) Equipped with a trio of instruments, the Hope orbiter will study Mars’ atmosphere. According to the Government of Dubai Media office, the mission is to “build the first complete picture of the Martian atmosphere.” In addition to exploring the planet’s climate and season changes, the orbiter will also collect data that could explain how hydrogen and oxygen particles move through and, at times, leave Mars’ atmosphere.

We still have so much to learn about Mars. These latest missions will hopefully lead to a new, clearer understanding of the Red Planet’s atmosphere.