How TRUE DETECTIVE Seasons 1 and 3 Are Connected - Nerdist

How TRUE DETECTIVE Seasons 1 and 3 Are Connected

by Lindsey Romain
We’re in the home stretch of True Detective season three and the mystery is finally coming together. After six meticulously crafted–but decidedly withholding–episodes, the penultimate chapter, “The Final Country,” leaves us with a few key plots to mull over.

First, there’s Mr. Hoyt of Hoyt Foods, the mysterious grocery tycoon whose presence has lingered in the margins of season three from the very beginning. Thanks to a series of red herrings, including one that hinted the crimes against the Purcell children might mimic the true-life case of the West Memphis Three, Hoyt has thus far escaped the watchful eyes of detectives Wayne Hays (Mahershala Ali) and Roland West (Stephen Dorff). But after the events of episode six, when a drunk and grieving Tom Purcell (Scoot McNairy) broke into the Hoyt house and discovered a pink room in the basement that once contained his missing daughter Julie, we know Hoyt is directly involved.

Most fan theories posit that Hoyt (who is played by Michael Rooker, though he’s remained off-camera so far) helped orchestrate the kidnapping of Julie Purcell for his daughter, whose own daughter died very young. Julie’s mother, Lucy (Mamie Gummer), worked for Hoyt Foods, so it’s possible the two brokered a deal: Lucy hands over her young daughter to a wealthy local family and helps them stage it as a kidnapping. According to this theory, Will, the other Purcell child, died on accident during the trade-off, which instigated the murder investigation.

But is there more to the story than just that? Elisa Montgomery (Sarah Gadon), the documentarian who  is conducting her own investigation of sorts in the 2015 timeline, seems to think there’s more to the story than what Hays was able to crack in the ’90s. According to her, this is all part of a larger conspiracy. One that involves two familiar faces: Rust Cohle and Marty Hart from season one of True Detective. 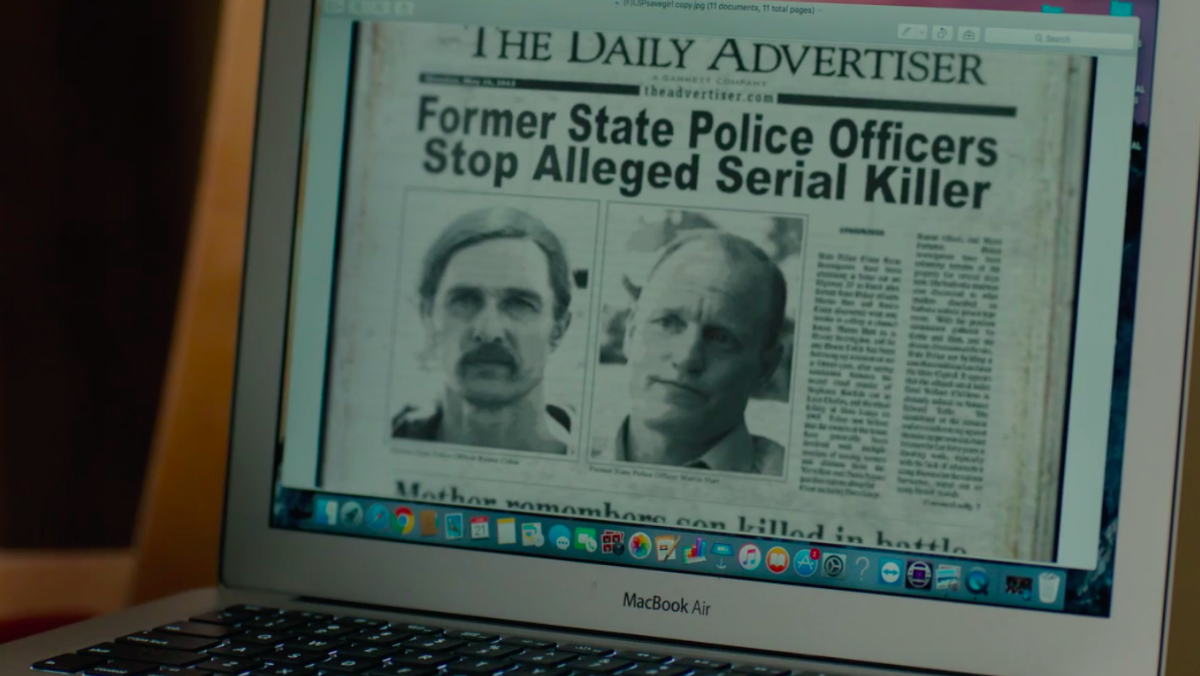 According to Elisa, the corn husk dolls that were found near Will Purcell’s body back in the ’80s were once used as signifiers in child trafficking. “Like this blue spiral, it’s code for pedophiles,” she explains to an elderly Hays. She then pulls up an old newspaper article featuring Hart and Cohle, explaining that in 2012, two former Louisiana state police stopped a serial killer associated with a pedophile ring. Though she doesn’t get specific, we can see from the photo that she’s referencing the incident that occurred in the season one finale, when Hart and Cohle finally tracked down Errol Childress (Glenn Fleshler), a scarred man responsible for snatching children for a ritualistic pedophile ring run by his relative, Billy Lee Tuttle. The detectives are able to locate and kill Childress, but the Tuttles later escape prosecution.

Elisa believes that Julie Purcell was another victim of the Crooked Spiral, as the Tuttle pedophile ring came to be known, or another similar group. If she’s right, and the Hoyts are in cahoots with the Tuttles, that would draw a direct line between the events of seasons one and three. Like Elisa says, in the previous cases, “high level politicians and businessmen were implicated, people with the power to make these things go away.” Hoyt, the owner of a giant grocery chain, would indeed be able to pay off enough people to protect himself from prosecution if he is indeed working for–or operating–a pedophile ring.

Is this another red herring?

Like I said before, True Detective season three has already set up an instance that looked like the right answer with the West Memphis Three allusions. It’s possible, then, that this is another misdirection that works best as an Easter egg for the much-loved first season of Nic Pizzolatto’s show. By episode’s end, we know that Hays is headed for a confrontation with Hoyt, so the truth will come out in next week’s finale. Regardless of how things shake out, it was nice to see our old friends Rust and Cohle once again. We like to think they’d be proud of Hays and West’s own multi-decade child murder investigation. Or at least nostalgic for the good ol’ crime hunting days.