It’s been a full five years since the first season of HBO’s True Detective, which feels at once like an exceptionally long time and like no time at all. Time is, it has been said, a flat circle, but it’s like it’s from a different era. Given the show’s lackluster sophomore season, and the four-year gap between then and season three premiering January 13, it wouldn’t be that surprising if you’ve forgotten most things about season one. But in addition to a few bravura directorial flairs and some ponderous bloviating by Matthew McConaughey’s Rust Cohle, the one thing everyone remembers is the season’s terrifying villain, the Yellow King, and his cosmically strange home base of “Carcosa.”

What separated the first season from all other gritty police procedural was how the mystery worked in troubling metaphysical themes. The aforementioned flat circle of time is one example, but even the serial murders at the heart of the story. Women left dead, bound, naked, and adorned with antlers gave the impression of some dark, deep evil, far more ceremonial and ritualistic than the usual murder. As the investigation continued, Cohle and his long-suffering partner Marty Hart (Woody Harrelson) began to uncover long standing corruption and cover-ups which allowed the cult of the Yellow King to thrive. The powerful will protect the powerful. 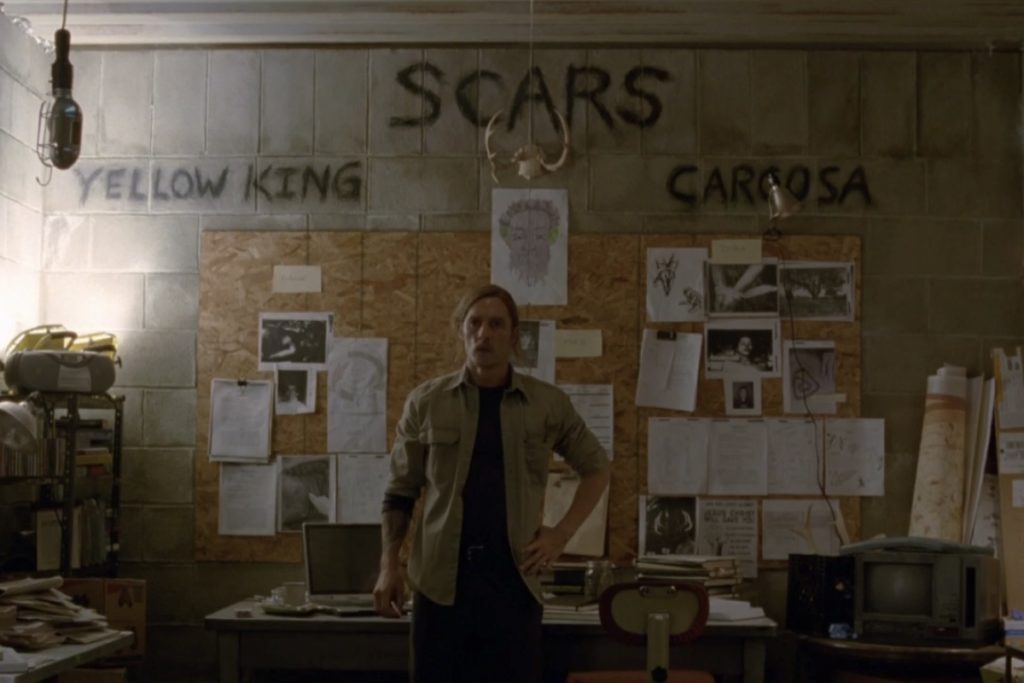 There’s a lot of cosmic horror in everything having to do with the Yellow King in the series, and they all point back to Lovecraft’s Cthulhu Mythos. Errol Childress, the Yellow King’s true identity, is described by children as the “spaghetti-faced man” owing to his distinctive facial scars. This could be an allusion to Cthulhu himself, the bat-winged behemoth with the head of an octopus and tentacles over his mouth. He is, in the story “The Call of Cthulhu,” the harbinger of the apocalypse, his mere awakening would mean the end of all life as we know it. Childress never gets that bad, but the themes are still there.

Childress–in his very first appearance, when he is just a weird lawnmower guy that Detectives Gilbough and Pipania ask for directions–makes mention of his family having been in that area a “long, long time.” This explains why he was protected by the families of the county for so long, but also parallels the ancient, almost eternal way he–as a representation of cosmic evil–has been lurking in similar places in similar times immemorial. One of the hallmarks of the Cthulhu Mythos is that the entities are ancient and forever, never destroyed, but merely dormant. 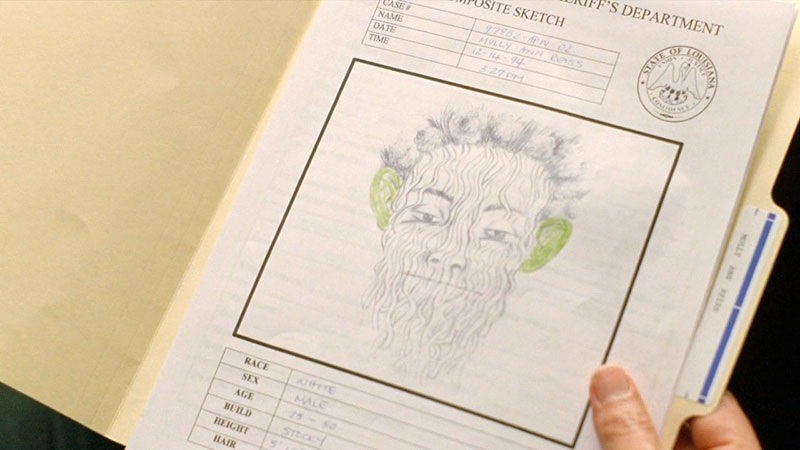 A much more pronounced reference is the Yellow King himself and his home of Carcosa. The American author Robert W. Chambers wrote a book of short stories first published in 1895 entitled The King in Yellow. The book contains ten short stories, the first four of which are weird, macabre tales relating to the fictional in-universe play called The King in Yellow, which causes anyone who has ever read it or seen it to fall into deep despair and madness.The four stories that begin the collection all deal in some way with the King in Yellow and his accursed Yellow Sign, the very sight of which, or possession thereof even unknowingly, is susceptible to some form of insidious mind control, or possession, by the King in Yellow. The first story, “The Repairer of Reputations,” is one of the most celebrated examples and evidently takes place in a dystopian future version of 1920s New York, although it’s possible–and likely–the main character and narrator is unreliable and insane due to a head injury and his connection to the cursed play. 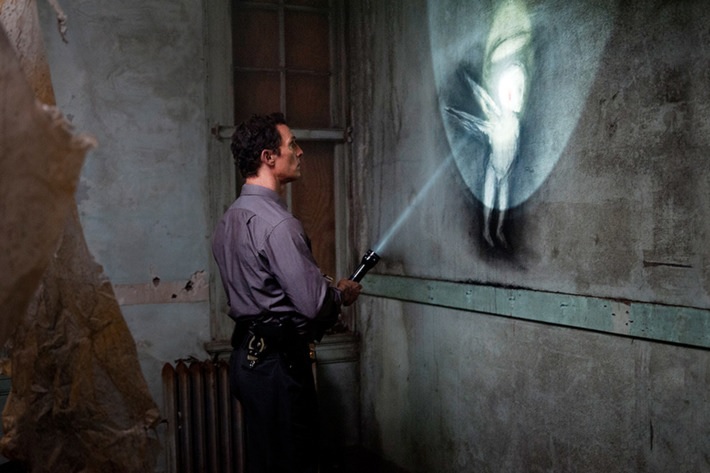 The second story is only minorly connected, but the third story, “In the Court of the Dragon,” tells of a man who goes to a church in Paris and is suddenly overcome with an unending fear of something. He soon is put at ease by the church organist playing music, but that quickly gives way when the organist plays loudly and discordantly, and the organist himself stands and stares at the narrator with a look of unfathomable hatred. The man runs away, but sees the organist everywhere until he finally attacks him. The man awakens back in the church and realizes he’s been overtaken by the King in Yellow, and the church fades away to reveal the majestic and terrible city of Carcosa.

And the fourth story, “The Yellow Sign,” finds an artist troubled by a churchyard watchman who resembles “a coffin worm,” and explains how the Yellow Sign’s original creator was not human. Lovecraft and other writers such as August Derleth who followed Chambers incorporated Carcosa and the King in Yellow into their storytelling, and it has since become part of the Cthulhu Mythos that the King in Yellow (given the Outer God name of Hastur) is a brother of Cthulhu and a key figure in the Mythos. 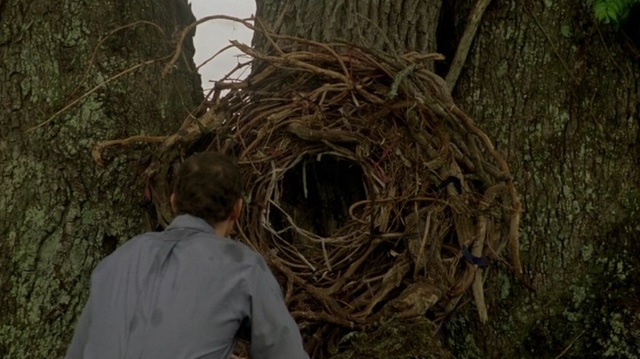 This all relates back to True Detective in truly upsetting ways. Is Childress truly the Yellow King, or is he merely a servant? In the final episode when Rust and Marty finally confront Childress and the psycho retreats into a massive, labyrinthine set of ruins, we know it to be Carcosa, and it looks just as creepy and unknowable as we’d been led to believe. Rust runs into a large antechamber with skeletal remains strung up in a tree, and he even briefly sees a swirling vortex in the roof before Childress attacks. 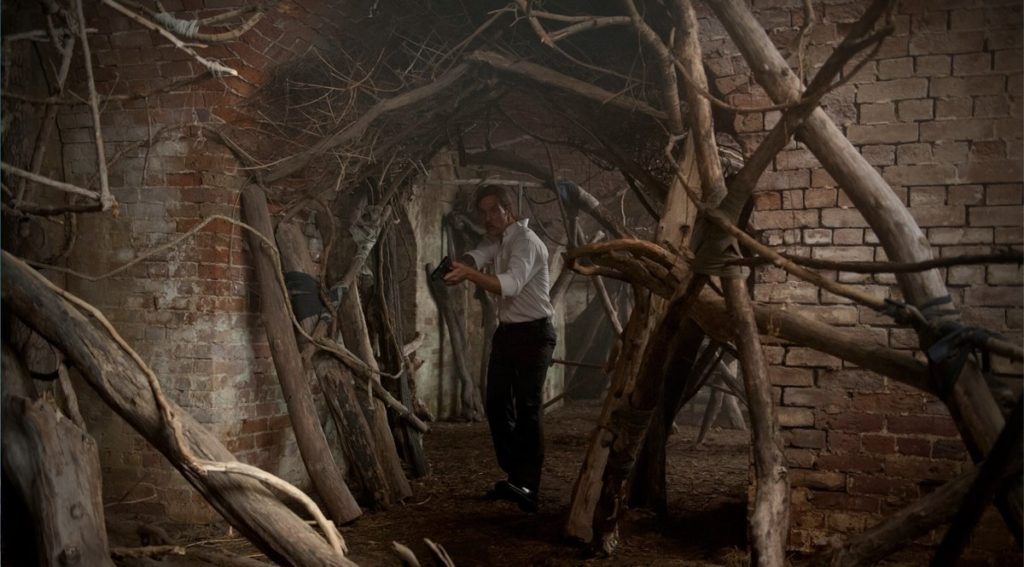 True Detective season one never fully explains this strange, cosmic occurrence, nor many of the other unexplained mysteries, but the end result is something troubling and chilling. Lots of edgy crime series will have a serial killer tied to devil worship or demonology, but True Detective, to my mind, was the first to tie a serial killer to the nihilistic, apocalyptic cosmic horror of Lovecraft and his ilk. If time is indeed a flat circle, then we may yet again see the awe and terror of sweet Carcosa, where true evil lies.