Just yesterday I was having a conversation with my wife. As we tried in vain to make an order from Amazon Fresh, the notion of a snacking cracker danced upon our brains. “Do you like Triscuits?” I asked. “They’re okay,” replied my wife. “I like them with cheese on them. But why are they called Triscuits?” I had no idea, really, but it was something I’d always wondered as well. Somethin’ to do with a biscuit, surely. Why is it “Tri”? I dunno, three ingredients maybe? End of caring.

One man cared a lot more, and coincidentally posted about it the same day my wife and I were having yet another isolation madness-induced conversation. Sage Boggs, a former writer for The Tonight Show, took to Twitter to share a fascinating and mysterious investigation. Just what does the word “Triscuit” mean?

OK, buckle up. I wanna talk to you about Triscuit. pic.twitter.com/Tg7334OSbc

Through the course of his Twitter thread, Boggs explains how he, too, had the passing wonder about what the word “Triscuit” means. But not content to merely go “huh. Anyway, what kind of pizza do you want?” Boggs set out to find the answer. He assumed, reasonably, that the “TRI” prefix had to do with the number three. Triangle, Tricycle, Trinitrotoluene; it had to be three of something, right? Maybe like three types of wheat?

The problem is, though, that, nope. The Nabisco Company (yes, he went all the way to the top!) said the exact records have been missing for years. But that it definitely does not mean three. What?!

So we went straight to the source. We emailed Nabisco. And the response we got a few days later shook us to the core. Here it is: pic.twitter.com/Ks1gmaIQXj

As Boggs exclaimed, “how do they know what it DOESN’T mean, but NOT know what it DOES mean? HOW??” It’s one of the most valid questions I’ve ever heard! And why haven’t the business records “survived” all this time? It’s baffling!

Well, the keen (and probably fairly bored) writer kept digging. Triscuit as a thing has existed since 1900 and Nabisco obtained the patent in 1902. So this crud is old, yo. And it was in the ancient advertisements for the cracker (which, if I’m honest, has always tasted like the year 1902) that Boggs found his answer. 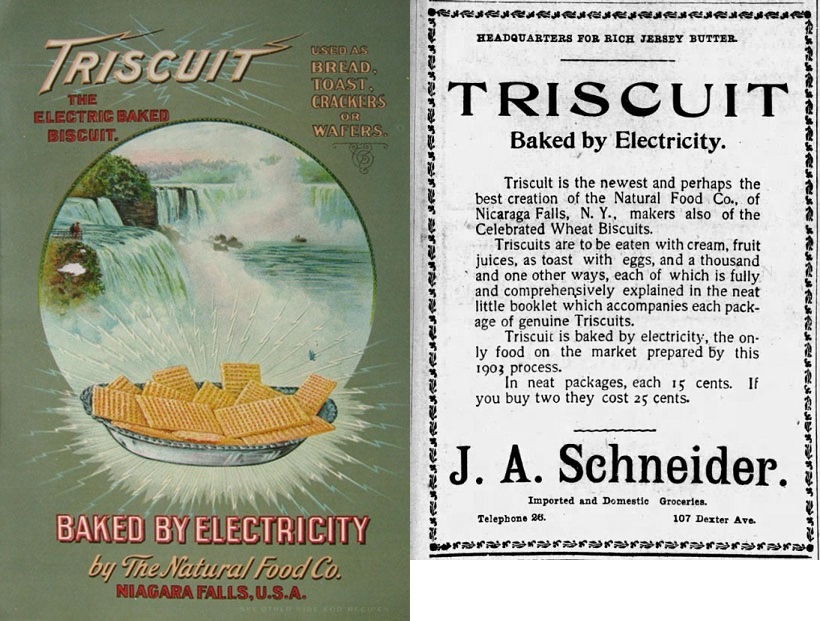 In the early 1900's, Triscuit was run out of Niagara Falls. And their big selling point? Being "baked by electricity." They were "the only food on the market prepared by this 1903 process." Look at the lightning bolts! And that's when it clicked--

Could it be? Could Triscuit be a portmanteau of Electricity and Biscuit? What even does that mean?! An Electricity Biscuit definitely sounds like 1902. Boggs seemed confident, but as of Thursday morning, he got the confirmation he, and the rest of society, sought.

Nabisco g-darn confirmed it! It’s true! Sing it from the mountain tops!

And now, folks, you can tell someone this at a party, or I can tell my wife, and sit smugly for a number of moments before you go back to worrying about the fifteen trillion other things right now that plague your mind.