Top Musicians Are Streaming to Help Folks Groove in Isolation

Now that much of the world is stuck in quarantine thanks to the outbreak of COVID-19, large concerts—along with just about every other type of major social gathering—are being cancelled left and right. But even in these strange and fearful times, there’s plenty of reason to pump some rump-rattlin’ jams. To help those who want to get their proverbial groove on in isolation, many top musicians are streaming sets online. Keep reading for a brief roundup of some of those musicians. You’ll also find some outlets where people can go to find artists who’ll be putting on web shows for free in the near future.

Pop music lovers who are stuck at home right now will definitely want to keep track of the #TogetherAtHome campaign, which was recently launched as a collaboration between the World Health Organization (WHO) and Global Citizen.

The concert series, which aims to “promote unity amid the COVID-19 pandemic’s social distancing protocols,” has and will be featuring some of the biggest musicians in the world streaming intimate live performances, most often from their homes. John Legend and Coldplay’s Chris Martin are two of the biggest names to stream so far although more big names are announcing sets continuously. As of this writing, the next big artist who’ll be streaming is Charlie Puth.

Social distancing is important, but it doesn't have to be boring. @miguel @charlieputh - you want next?
Learn about actions you can take to help slow the spread of coronavirus with our partners at @WHO and @GlblCtzn https://t.co/uDs3G7kO7B #TogetherAtHome https://t.co/fHkBbsF8e6

National Public Radio (NPR) isn’t streaming live shows online, but it’s still a great source for recent, intimate concerts that are available online. Its Tiny Desk Concert series is updated several times a week, and includes many popular artists like Jenny Lewis, Jimmy Eat World, and Koffee. On top of that, NPR also has a web page that lists streaming online concerts and is updated frequently.

Stay At Home Fest, which is being organized by Fight for the Future as well as “an ad hoc group of artists,” is a “central hub [for finding] all the fantastic decentralized events that are happening online….” You can find Stay At Home Fest’s calendar of events here. A couple of the exciting, upcoming streams listed on the site’s calendar include an Indigo Girls live stream happening in the afternoon on March 19, as well as “The Unofficial Online SXSW” with Raye Zaragoza, also happening on March 19. 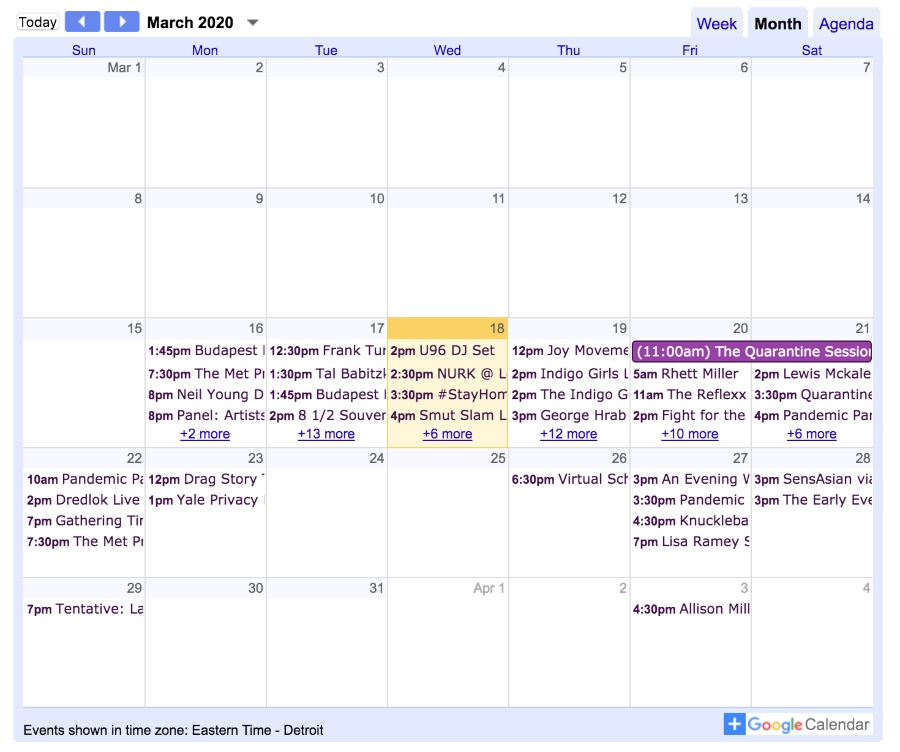 A look at Stay At Home Fest’s schedule as of March 18. Full, live calendar here.

On top of hashtags like #TogetherAtHome and the aforementioned tools for keeping track of who’s scheduled to stream for free (or with donations) over the next few weeks, there are also plenty of one-off live “concerts” happening that will be made available by individual musicians. Wyclef Jean, for example, says that he’ll be doing live acoustic sessions from his house. Keith Urban put on a half-hour live show on March 17 that can be viewed on his Instagram. Rob Thomas is even putting on “Social Distance Sessions.”

Day one of my acoustic Sessions live from my house, while Under self quarantine “if I was President” Hit the comments to let me know what other songs your would like me to perform while we are #TogetherAtHome go to my igtv for extended versions pic.twitter.com/NY6MHOQrxP

What do you think about these sources for streaming music during the international COVID-19 quarantines? Do you have any other tools or sites you like to use for live streaming music? And is there any particular musician you’re aware of who plans on doing a live stream soon? Help out your fellow quarantined music lovers with some suggestions in the comments!