Researchers in Antarctica have been working hard to find the answer to a critical question that will help us make more-effective predictive climate models, and the science behind the mission is absolutely fascinating. But those researchers have also taken a little “chill” time here and there to throw some ice bricks down super-deep holes in the ground, which is also great because doing so results in a bunch of crazy, sci-fi sounds that are endlessly loop-able.

What does a 9 inch ice core sound like when dropped down a 450 foot hole? Like this! Credit to @peter_neff for the idea and @Scripps_Polar, @sciencejenna, @GeosciencesPU, @US_IceDrilling, and @paleosurface for the execution! pic.twitter.com/pW7LxKdbUB

The clips of the Antarctica-based researchers chucking ice down ice holes, which come via reddit user schizoduckie, were posted by isotope geochemist, John Andrew Higgins (video above), and University of Washington Postdoctoral Research Associate, Peter Neff (video directly below). Neff’s original video was the first to go viral on Twitter back in February 2018—garnering an insane 10 million views—while Higgins’ clip, from February of this year, just took off on the social media network and already has over three million views. The idea for the ice-hole toss was Neff’s, though, which means he’s the one who deserves an Oscar for best naturally occurring laser sound. (It’ll be a category in 2042, just you wait.)

When #science is done, it’s fun to drop ice down a 90 m deep borehole in an #Antarctic ?? #glacier ❄️. So satisfying when it hits the bottom.

According to an interview with the University of Washington (bottom), Neff said that once he and his fellow researchers had drilled out all of their sample cores, they could only do “the logical human thing” and “throw some ice down a deep hole.” Around a minute into the video, there’s a scene of a handful of researchers gathered around the hole as a piece of ice is thrown in, and their reaction to the weird, laser-esque sound it makes is beyond priceless—definitely a taste of childhood glee turned up to 11.

That sci-fi laser-esque sound, Neff says, is due to sound waves bouncing off the walls of the bored hole as they make their way back up toward the surface. The Doppler effect also comes into play, as the frequency of the sound waves increases as they’re ejected from the hole, into any nearby ears or microphones. For reference, think about an ambulance: As an ambulance comes toward you, its siren takes on a higher pitch, as it moves away from you, the pitch decreases. This is due to a change in frequency of the sound waves emitted by the ambulance relative to the person hearing them, which is the same effect that’s at play here. 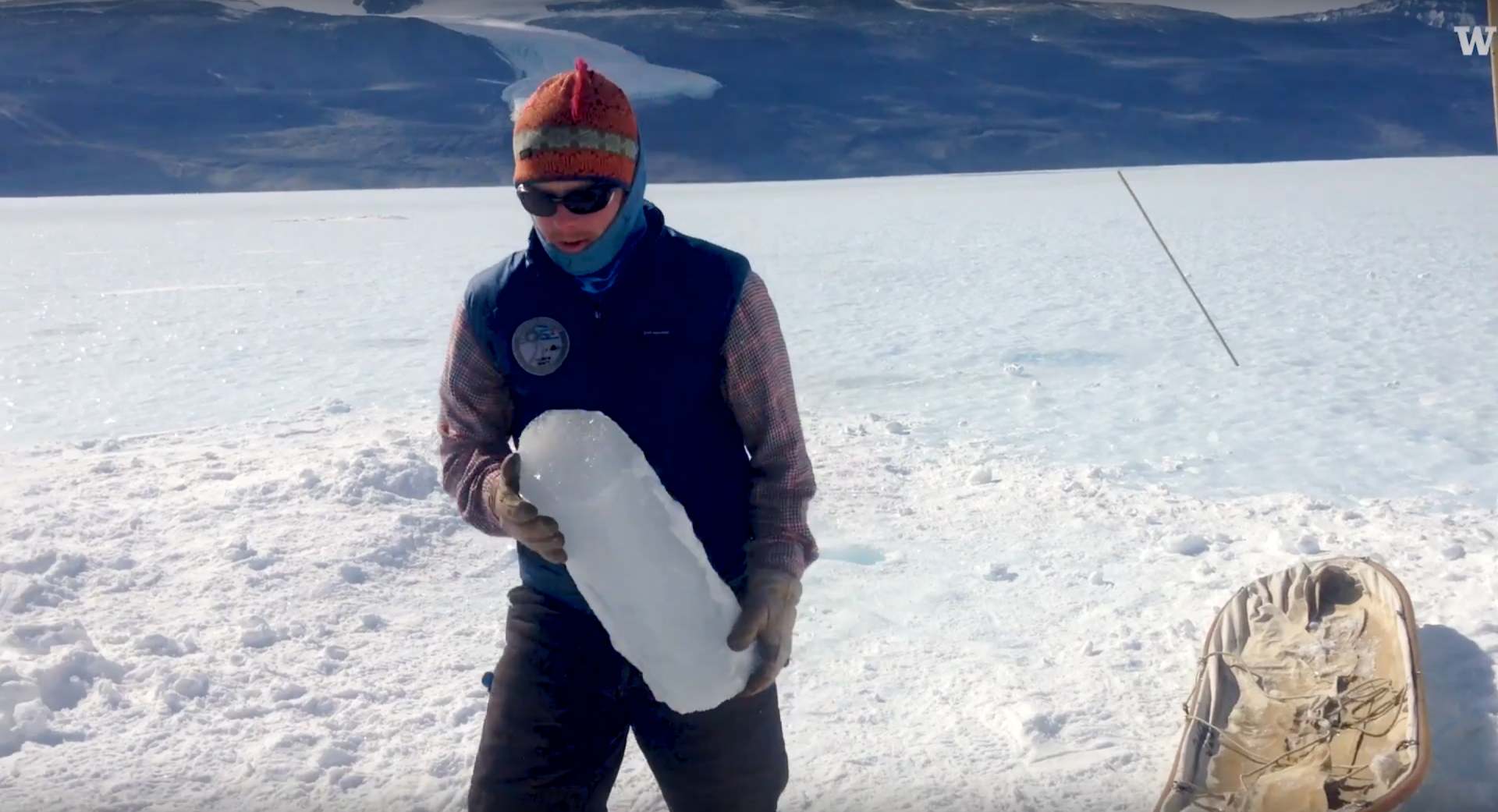 Neff getting ready to throw a block of ice down a bored-out hole. University of Washington

In regards to the “real” scientific research that’s being performed by Neff, Higgins, et al., that’s being done in order to better understand how Earth’s climate responds to natural climate variations and the human-caused ones of today that are primarily due to increased emissions of heat-trapping greenhouse gases (carbon dioxide, methane, nitrous oxide, etc.). Neff, for example, is studying hydroxyl radicals, which are produced from the decomposition of certain organic compounds, and are often referred to as the “detergent” of Earth’s atmosphere, as they react with pollutants and, in the process, “crack” them apart. While Higgins is studying ice that’s up to 2 million years old, in an effort to glean how fluctuations in CO2 levels in the past have affected global temperature and other climate variables.

A University of Washington video describing the science being done at Law Dome.

Ultimately, by studying these ice cores, researchers will be able to get snapshots of Earth’s atmosphere as it was at various points deep in the past, and will thusly be able to better predict how Earth’s climate is going to change in the future. Which, again, points to how important this research is. Although considering both of those laser-ific ice-dropping videos went viral, maybe these scientists will consider messing around a bit more in an effort to encourage the public to hear them out.

What do you think about about the sounds made by dropping ice bricks down ice holes? Do they sound more like cartoon gunshots or baby crocodiles to you? Drop into the comments section with your thoughts!