Double rainbow, move aside! The 22° halo has made its entrance onto the internet stage and even though it’s a fairly common sighting—odds are you’ve seen a few yourself—the natural phenomenon is still especially majestic in this video from the ski slopes of central Sweden. The clip is brief, but the orb of light bestowed upon the skiers is glorious enough to call for a toast to the glories of the firmament! Or at least 30 seconds of your time.

The video was actually recorded in December, 2017 by Håkan Hammar, although it recently resurfaced and went viral on Twitter. In the video, Hammar and his fellow skiers are treated to what is ultimately the result of sunlight being refracted off a series of hexagonal ice crystals in the atmosphere. Essentially, when sunlight, or moonlight, arrives at a place on Earth’s surface cold enough to have ice crystals in the air, observers have a decent shot at witnessing one of these 22° halos. This is because the incoming waves of sunlight or moonlight are bent as they pass through the ice crystals, and directed toward different spots on the ground. In other words, the ice crystals form a lens that points the incoming light at a certain spot, and if an observer happens to be at that spot they’ll get an eye full of 22° halo. 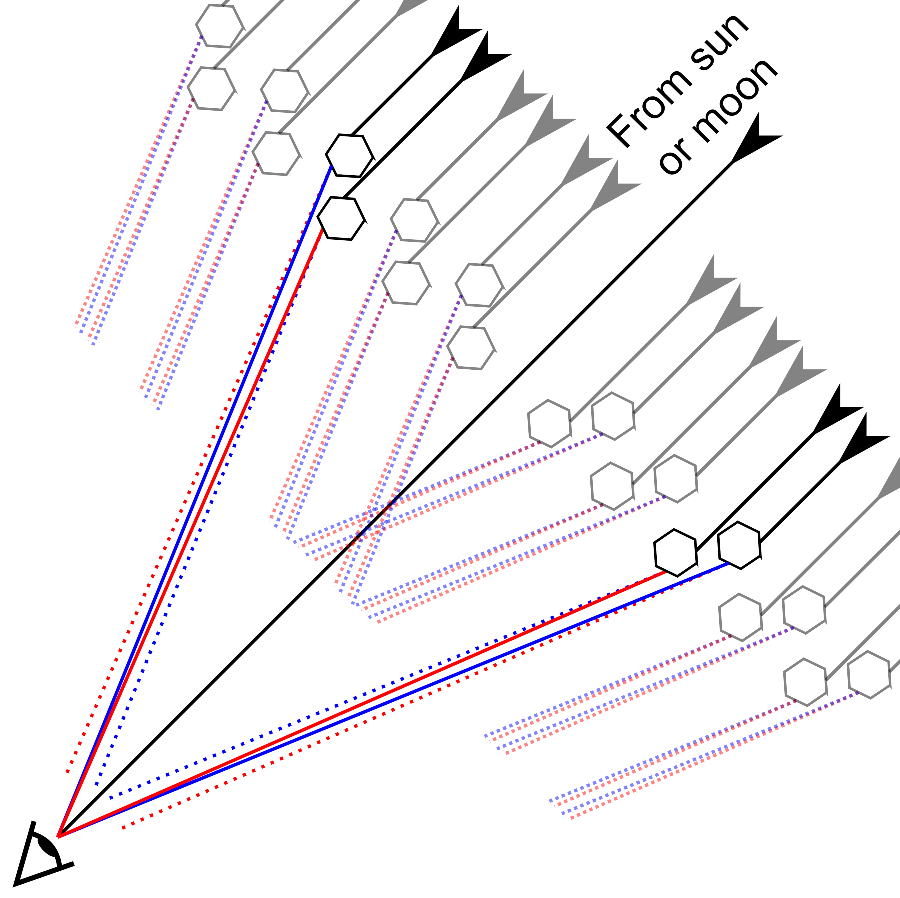 The solid lines represent the light that enters an observer’s eyes. Note that the ice crystals that refract the light are 22 degrees apart. Dave3457

The two brilliant spots of light on opposite sides of the halo, but on the same plane as the light in the middle are referred to as “sun dogs.” Incidentally, there’s not a ton of information on the origin of the name “sun dogs,” although website HyperPhysics says that the “two bright spots… [are] reputedly referred to by artic people as the sun’s dogs.” 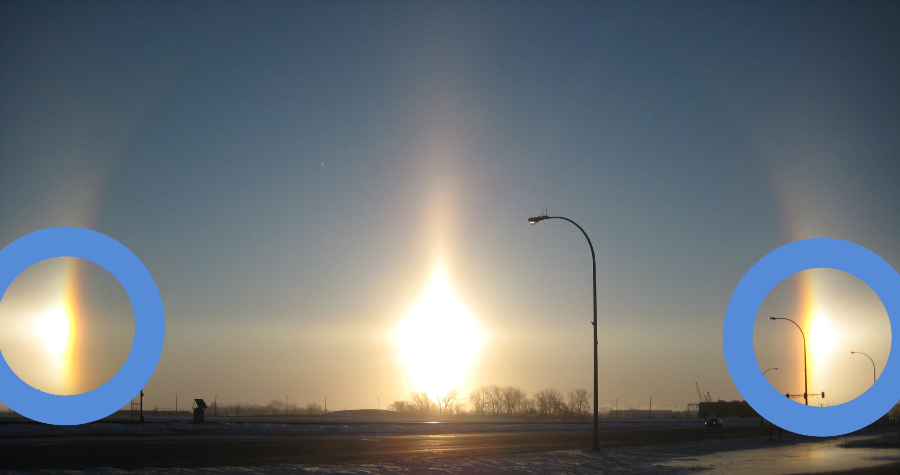 The Sun dogs are circled in blue. Gopherboy6956

For those who want to see a 22° halo and a pair of sun dogs with their own eyes, the good news is that you don’t need to be in any particular spot on Earth to catch one—they’re literally visible from any spot on Earth during any time of year as long as the weather conditions are right. They can even appear in tropical regions thanks to ice crystals moving at heights of between 18,000 and 21,000 feet above surface level. Which kind of makes them the low-maintenance antithesis of all those other brilliant Mother Nature displays that take decades before putting on their dazzling shows.

What do you think about this especially grand 22° halo? Have you seen a more glorious one yourself, or is this indeed la crème de la lumière? Refract your opinions into the comments!