Watching the world’s average temperature rise over the last 140 years—which you can do in the time-lapse video from NASA immediately below—is downright scary. But nowhere are the implications of Earth’s increasing warmth more frightening than at our planet’s poles. So much sea level-altering ice is locked up in the North and South. Which is why it’s heartbreaking to hear that a research station based in Antarctica is reporting the highest-ever temperatures ever recorded on the continent.

A video from the NASA Climate Change YouTube channel showing how much Earth’s average temperature has risen since 1880.

According to a recent press release from the World Meteorological Organization (WMO), the Argentinian Esperanza research base located on the northern tip of the Antarctic peninsula has just reported a local temperature of 18.3 degrees Celsius (or almost exactly 65 degrees Fahrenheit), beating out the previous record of 17.5°C (63.5°F), recorded in the same location in March, 2015. The record has yet to be verified by the WMO’s Weather and Climate Extremes committee, but a WMO’s Weather and Climate Extremes rapporteur is saying that “Everything we have seen thus far indicates a likely legitimate record….”

The WMO’s press release notes that temperature records like these are important because they help scientists to “build up a picture of the weather and climate in one of Earth’s final frontiers,” thusly allowing them to better keep track of climate change, ocean patterns, and the rising of sea levels. 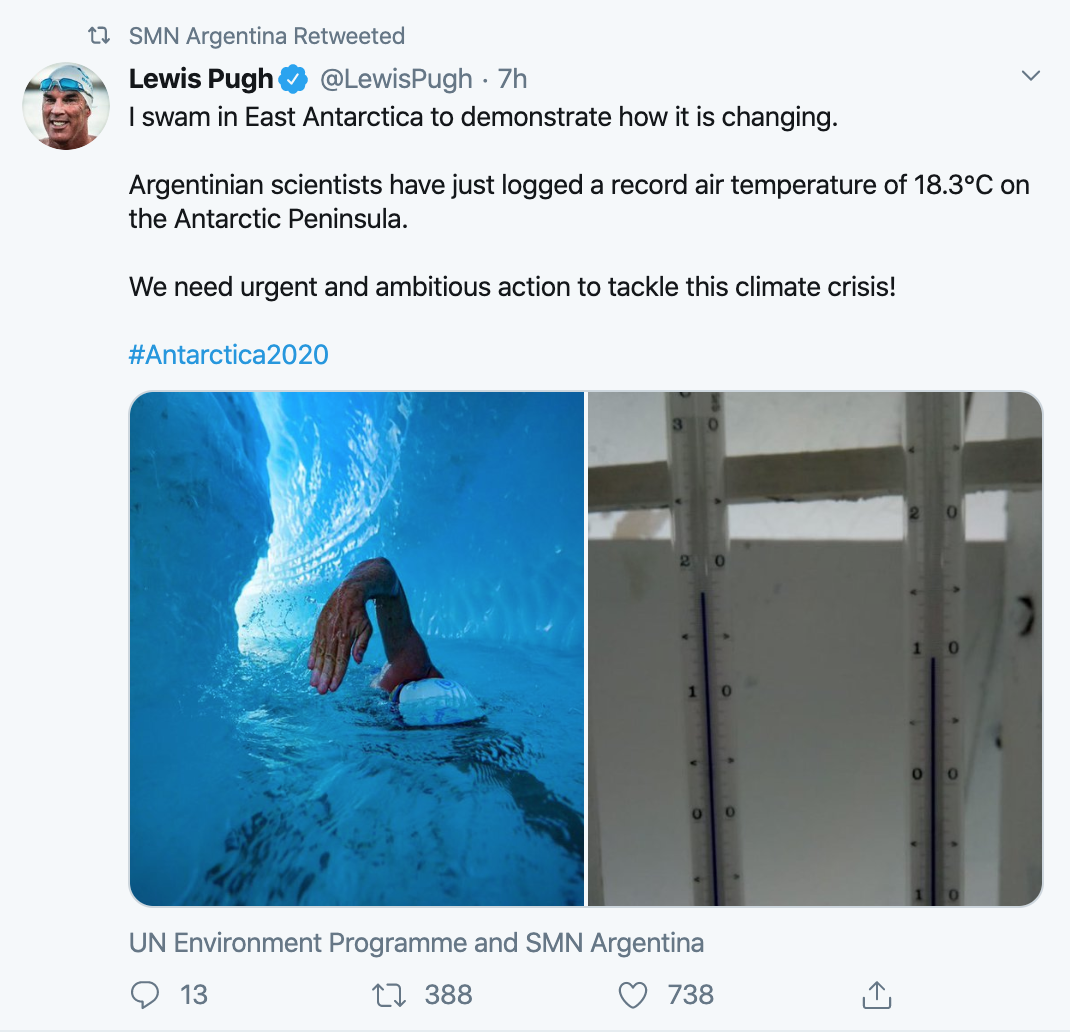 Lewis Pugh, a “UN Patron of the Oceans,” notes the record temperature recorded by the Esperanza base in Antarctica. Lewis Pugh / twitter

Apparently the Antarctic Peninsula (a tip of the continent near South America), is amongst the fastest warming regions on Earth. The average temperature in the region has increased 3°C (5.4°F) over the past 50 years, which has resulted in a six-fold increase the amount of sea ice lost annually between 1979 and 2017. A video from NASA, immediately below, shows how much annual ice loss increased in Antarctica between 2002 and 2016. (Note that the Antarctic Peninsula, upper left-hand corner of the map, is amongst the reddest areas.)

A video from NASA showing how much sea ice Antarctica lost between 2002 and 2016.

Unfortunately, the WMO release goes on to note that Pine Island Glacier and Thwaits Glacier, both located on Antarctica’s West coast (the former on the west coast of the Antarctic Peninsula), have been retreating at an accelerated rate, and have both reported “dramatically losing ice over the last 25 years.” That’s obviously another frightening reminder of how urgent it is take heed of rising global temperatures— something that the Esperanza base, which uses the motto Permanencia, un acto de sacrificio, or “Permanence, an act of sacrifice,” probably wants us to do before the world’s precious sea ice becomes mortally ephemeral.

What do you think about this new temperature record reported out of Antarctica? Can you see any silver lining to this news, or is this just more reason to line up behind Greta Thunberg and continue on fighting for massive cultural change in regards to how we treat the environment? Let us know your thoughts in the comments.