THE WALKING DEAD Will Bring Negan’s Wife Lucille to Life

The details surrounding The Walking Dead’s additional Season 10 episodes are finally coming together. Entertainment Weekly reports that Hilarie Burton will take on the role of Negan’s wife Lucille. This news is pretty cool considering Burton and actor Jeffrey Dean Morgan (who plays Negan) are real-life husband and wife. It’s also thrilling for fans of the TV series as well as the comics for so many reasons.

This will be Lucille’s first appearance on the television series. The character actually died early into the apocalypse from pancreatic cancer, an event which sets Negan onto the dark path towards forming the Saviors. Negan talks about his wife a couple of times throughout the series to characters like Father Gabriel, Anne/Jadis, and Alpha.

He regretfully admits that their relationship was in shambles before the apocalypse. He also says he was unable to put Lucille down after she became a walker and she later became the inspiration for his infamous barbed wire baseball bat named Lucille. Now, TV series fans will get the backstory of Negan and Lucille. (The person and maybe the bat, too.)

Many comic fans met Lucille through Here’s Negan, a stand-alone volume of The Walking Dead. The story takes readers back to the pre-apocalypse days of Negan finding out about his wife’s cancer and her initial treatments. He’s unsurprisingly not a great person before everything falls apart which explains how he ended up being a full-on villain.

The world goes downhill quickly and Lucille ends up dying (and being put down) as Negan sets off with a young boy. Here’s Negan follows Negan on his path towards meeting characters like Dwight, finding the Lucille bat, and forming the initial Saviors group. 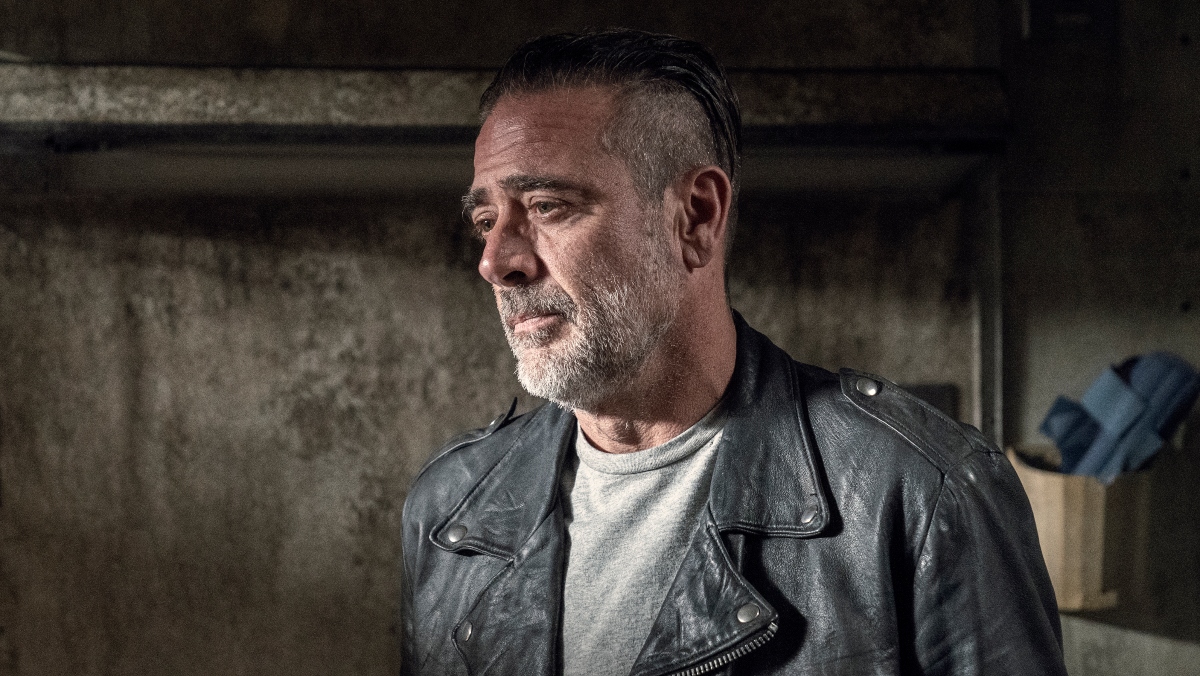 The Walking Dead will likely lean heavily on Here’s Negan to give him his own standalone episode or two. It is possible that Negan will decide to tell his origin story to someone within the group. A friendly sit-down with Lydia and Negan is a strong possibility considering their close relationship.  Maggie and Negan still have some presumably bad blood between them so this story might build a bridge between them after so many years of anger.

Or, perhaps he will strike out on a solo adventure to put some long-standing unfinished business to rest. It wouldn’t make sense for him to go searching for his Lucille’s body so many years into the apocalypse. But maybe he will want to go back to his hometown to get some form of closure.

Been pretty hard to keep this a secret. 💕
But I love working with @JDMorgan . I love watching him become #Negan and take on that swagger. And I love the @TheWalkingDead family. They’ve been a part of our family for ages and I’m so grateful for their kindness. Xoxo #hereslucille https://t.co/9tRh7NB8WY

Perhaps he will bury Lucille (the bat) physically and reflect on his past as he emotionally buries his wife, too. This story also sets up a chance for Dwight to show up if The Walking Dead decides to go further into Here’s Negan’s storyline. Dwight is still alive on Fear the Walking Dead but this Negan episode could bring back long-dead characters like Simon and Morales to show how the group really rose to power.

It’s not certain how this Negan backstory will advance the overall storyline (if it does at all) but the chance to go back in time and see Lucille on the TV screen for the first time is exciting news.