We’re big fans here of The Merkins. These YouTubers imagine horror movie icons in all kinds of different roles, making videos of Freddy, Jason, and the rest as boy bands ( The Slashtreet Boys), or sitcom stars ( Kill House). Jason and Freddy even put aside their differences and gave us a sappy rock ballad together. But for this scary season, our favorite slashers are rockin’ out hard, hair metal style. Get ready to bang your heads, horror fans. This horror parody music video is one for the ages.

In an homage to ’80s metal icons Mötley Crüe, Jason Voorhees, Michael Myers, Ghostface, and Freddy Krueger have formed “Möstly Crüel.” And their latest music video is a parody of the Crüe’s 1987 hit, “ Girls, Girls, Girls.” Only this time, it’s “Kills, Kills, Kills.”But worry not, there are still plenty of Final Girls in this video. You can watch our favorite bad boys rock out in their music video above.

We must say, Jason’s bedazzled hockey mask is pretty impressive. And his blonde hair and bandana would make Vince Neil proud. Ghostface is definitely the Tommy Lee of the group here. Meanwhile, Michael Myers actually kinda looks like Paul Stanley from Kiss. And as for Freddy Krueger, he’s got a Rob Halford from Judas Priest thing going on. They really covered all of their bases in this horror parody music video. 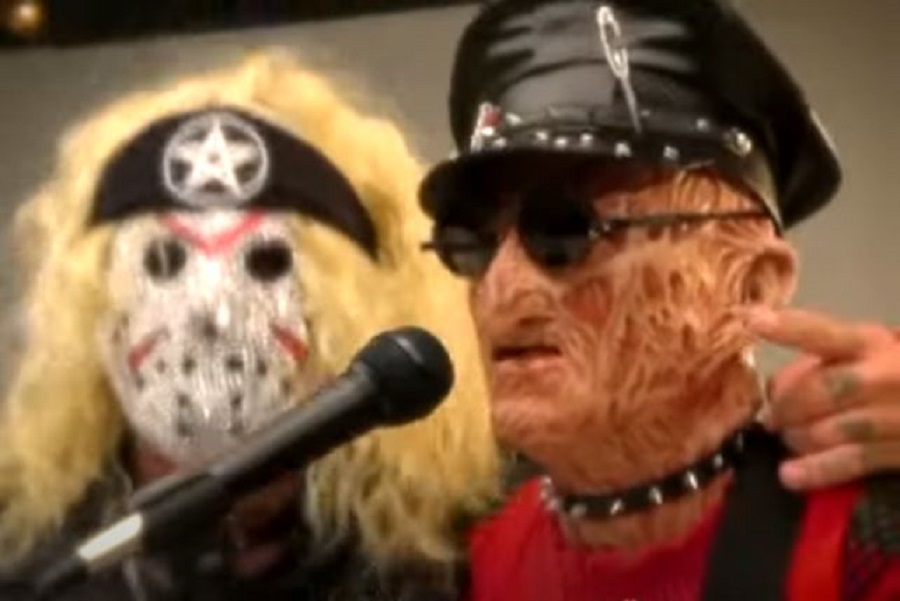 It’s actually appropriate that The Merkins would choose a Mötley Crüe song for a slasher video. As anyone who grew up in the ’80s knows, during the “ Satanic Panic” era, Mötley Crüe was considered as being “of the Devil.” Mainly by concerned suburban parents. The kind of parents who took all their silly demonic imagery seriously. We guess it would have been too on the nose to have Möstly Crüel cover their signature song “ Shout at the Devil.” Although we honestly wouldn’t mind seeing that.