Attention fans of Game of Thrones‘ Daenerys Targaryen. I would like you to meet someone: Princess Askia Poritskaya e-Nimri. The leader is at the center of Greta Kelly’s upcoming fantasy novel The Frozen Crown. She’s ascended the Frozen Crown of Seravesh because her people need her. Askia has her title and hereditary magic. However, that doesn’t meant she’s having the easiest time of it. Faced with losing supporters, Askia decides to travel to another kingdom for help. The kingdom of Vishir, however, doesn’t support women doing it for themselves—especially not when it comes to politics. And that’s just one of the hurdles Askia faces.

You can get a taste of how cool Askia is and what she must overcome in our exclusive excerpt from The Frozen Crown, the first book in a duology. Greta Kelly enthused over how badass Askia is to Nerdist. She said, “She’s off wielding witchy powers and leading armies, meanwhile, I can’t even watch commercials for horror movies. Needless to say, Askia let me feel brave—if only for a moment. But as awesome as writing her was, it was funny getting feedback from my editor wondering why she was holding back in some places (a nice way of asking why I was holding her back.) Askia has backbone for days, and I sometimes needed that extra reminder to get out of the way and give her free reign to be as impulsive and brash as she is.”

In addition to showcasing Askia, our excerpt will give you a taste of The Frozen Crown‘s complex world. Kelly had to consider the world from Askia’s point of view. That meant Kelly leaned into her college experiences; she majored in International Studies. It informed her writing. She told Nerdist, “A part of that major had me both studying and working abroad—something I passionately recommend to college students. Studying how nations interact in addition to (and sometime in opposition with) how the average person lives, was a huge inspiration for me and hopefully allowed me to infuse the world of The Frozen Crown with additional nuance.” 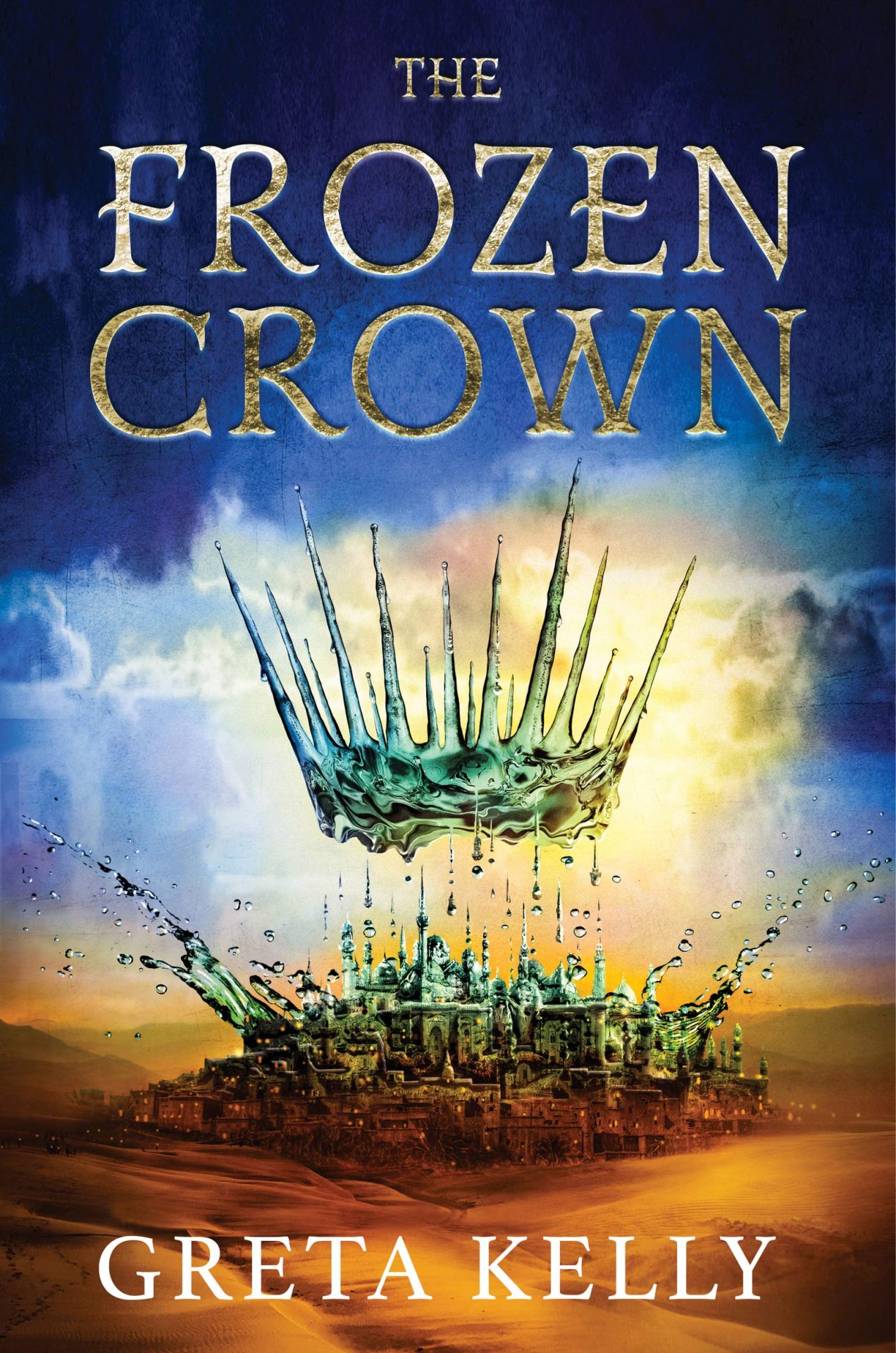 This below excerpt from an early part of the book will plop you right into Askia’s shoes. Brace yourself because it quickly escalates to 11.

The Black Wolves waited in the foothills. Three thousand men stood in perfect rows and perfect silence, each of them but two breaths from violence. I sensed their rage, for it was within me, too. Betrayal bubbled under my skin. The Wolves watched Vitaly. Vitaly watched me.

He knelt on the frozen ground, shackles clamped around useless arms. A filthy robe covered the worst of his wounds, but his face was so ashen it was clear he wasn’t long for this world. There was no more hope in his eyes, just acceptance.

“My lady?” Prince Iskander stood by my side. His lips were set into a frown, but I felt his sympathy in his every worried glance.

Sympathy I didn’t deserve. Vitaly might have thrown the dagger, but it was my weakness that had driven him to it. I hadn’t been smart enough to foresee the invasion. I hadn’t been fast enough to stop the burning of Nadym. Did Vitaly think I wouldn’t be strong enough to turn back the Roven tide? That I wasn’t ready to give anything, everything to free our people?

“Lord Vitaly Kavondy, Lieutenant of the Black Wolves of Seravesh, you have been found guilty of treason, espionage, and the attempted murder of Her Royal Highness, Askia Poritskaya e-Nimri.”

Arkady’s words echoed off the surrounding hills sharp enough to cut skin. “The penalty for your crimes is death. I strip you of office and name. May my fallen brothers hunt you across the Marchlands. May the Two-Faced God turn you away from Its light.”

I stepped into the echo of Arkady’s words, clenching my sword’s hilt to hide the tremor running through my hand. “Confess now, and one last request shall be granted.” The acceptance in Vitaly’s face turned to pity. Though my words rang across the mountains, colder than winter snow, he obviously heard the lie in my tone, this man I had loved as a brother. A dull depthless pain throbbed through my body. “Why?” I asked in a voice meant solely for him. “I can stop him. I promise you there isn’t anything—”

“No, Askia, it’s not—” A long breath gushed out of him and he sagged toward the ground. “Radovan is going to do it again, like he did to Nadym, but this time to Kavondy. My family.”

His words came out in a gurgled rasp, like he didn’t have enough air behind them. Blood bubbled on his lips. “A man came to me. He put his finger to my forehead and drew me into the burning ruins of Nadym.” Vitaly gulped, like he was trying to swallow back dread. “He said Radovan would unleash Branko. He said Kavondy would burn unless I killed you. But I had to do it here. With the world watching, he said. I don’t think he ever intended for me to succeed. But if it saves my family . . .”

His words echoed into the hollow place where my heart used to be. This wouldn’t save his family. They were probably killed the moment Vitaly left for Idun. My rage guttered. I didn’t have the strength to tell him.

I bowed my head. “Request?”

“Sing the dirge for me, my lady. Please.”

It wasn’t allowed, not for traitors. General Arkady would have killed him for the presumption. But that was Vitaly, bold and bright to the core. To the end.

I circled Vitaly’s still kneeling body and tilted his head until it rested on my stomach like some horrid mockery of an embrace. I smoothed his black hair out of his eyes with one hand and drew my sword in the other. My heart stilled, frozen between one beat and the next.

He looked up at me, tears falling from his clear green eyes. “I will serve you better when I see you again.”

I closed my eyes against the oath, but not before seeing Arkady stiffen and Iskander frown. I pushed them out of my mind. Now was for Vitaly, and the rest he was forsaking. I swallowed
back tears, refusing to let the grief surface, but Vitaly knew. He always knew. Vitaly smiled.

I raised my blade to his throat and, in one smooth motion, cut.

The sword dropped to the blood-spattered ground, and I clutched his body to my chest. Vitaly’s eyes were locked on mine. His mouth worked in silent gasps. I refused to look away, even when his blood rushed over my hands. His body convulsed. His skin went gray. I held him as he died. Till his last drop of blood fell. To his last breath. Until he was gone.

I forced myself to breathe past the pain rending my heart, as Arkady laid Vitaly down on the frozen earth. Hands shaking, I pulled off the black mourning shawl that encircled my neck and covered my hair with the gossamer veil.

Cupping my bloody hands in front of my eyes, I sang. My voice rang into the cold air and bounced off the mountains. It was not strong, not clear or beautiful, but it was filled with all the things I could not say.

The last note faded, and the wind kicked up in answer to my sorrow, howling across the ridge. I grabbed the edges of my veil to keep it from flying off. When I looked up, Vitaly stood at the head of his corpse. The calm on his earthly form was utterly absent from his ghostly one. His eyes froze me, willing me to act. I had to do it here. With the whole world watching.

Governor Erol cleared his throat. “My lady, I must express my deepest sympathy to you. This attack on you—”

Erol opened his mouth, but I wouldn’t be interrupted. I would make them understand.

“Use your brain. Vitaly was a member of my close guard for years. If it was simply a matter of getting me out of the way, he had ample opportunity. This wasn’t an assassination. It was a message. To you.”

I stepped closer, taking in the unsure faces of the men around me. “Emperor Radovan may have ordered my death, but he was putting my blood on your hands. A foreign royal killed in your court? Not only the rightful queen of Seravesh, but the Vishiri emperor’s goddaughter, murdered with the whole world watching. . .” I let my words trail off, but the implication was clear. “Roven is coming, Governor. Be ready.”

I turned to Prince Iskander. “Your father will need to be ready, too. Tell him.”

Iskander’s jaw clenched. Something unknowable shone in his eyes. “Tell him yourself. We leave at dawn.”

The Frozen Crown goes on sale on January 12, 2021. It’s available for pre-order now.