We are less than midway through the year and we already have so much to be thankful for, television-wise. In the Golden Age of TV, there is a seemingly endless amount of options, with new shows coming out weekly, and old familiars finally starting to bow out of fashion. With all of that content, it can be hard to know where to start and what to trust. There’s just too much out there to be certain.

But buried in that mountain of possibility are a number of perfect gems—series that transcend the “good” label and are genuinely great. We wanted to pay special attention to what we at Nerdist consider the best TV shows of 2019. A mishmash of dramas, comedies, anime, and more. If you’re looking for a series or two to curl up with, you can’t go wrong with any of these. 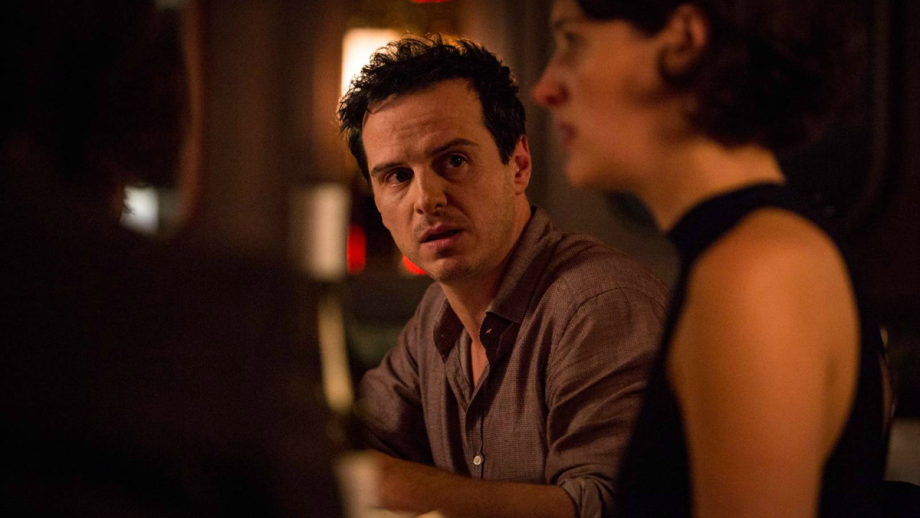 Where to Watch: Amazon Prime

The second season of Phoebe Waller-Bridge’s seminal series will be its last, which is both a shame and a delight. It’s the perfect ending for a show that follows our 30-something British lead, a bakery owner who uses sex and booze to distract from the enormity of her personal grief and family drama. That sounds dark, but Waller-Bridge infuses the series with quirky, smart, devastating insights. The second season says goodbye to the character and the walls she’s built around herself, and also includes the already much-memed relationship between Fleabag and Andrew Scott’s “ Hot Priest.” 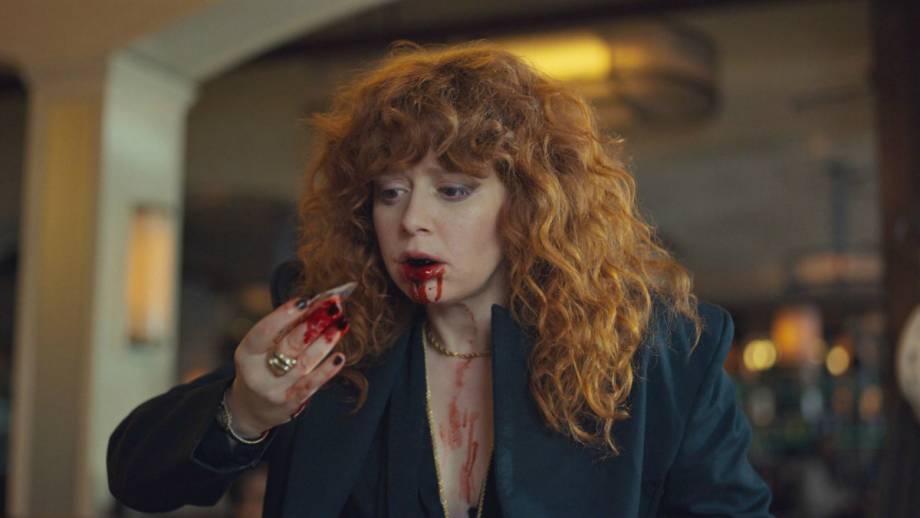 Natasha Lyonne has been a wonderful, unique performer for more than two decades, but Russian Doll is the first time in a long while that she’s gotten to fully shine in a role that deserves the bulk of her talent. She plays Nadia, a woman stuck in a Groundhog Day-like repetition of her 36th birthday, with each version of the night ending in her death. It sounds like a simple enough concept, but the series mines so much from that premise. It’s about grief, addiction, mental illness, and finding interpersonal connections while you still can. It’s profound, and easily one of the best things we’ve seen in any medium this year.

For many of us, it was some magical, mortifying combination of existential tumult and unadulterated glee that formed our seventh grade experience. Better than just about any other show about early teen life, Pen-15 nails both ends of this spectrum. Consider the moment when main characters Maya (Maya Erskine) and Anna (Anna Konkle) are launched sky-high from the depths of self-consciousness when they get their hands on a flattering new garment. The emotionality motivating sequence is real enough to bring you to tears, but their hyper-confident dance montage down their middle school hallways will keep you laughing hysterically and cements this as one of the great shows of 2019. 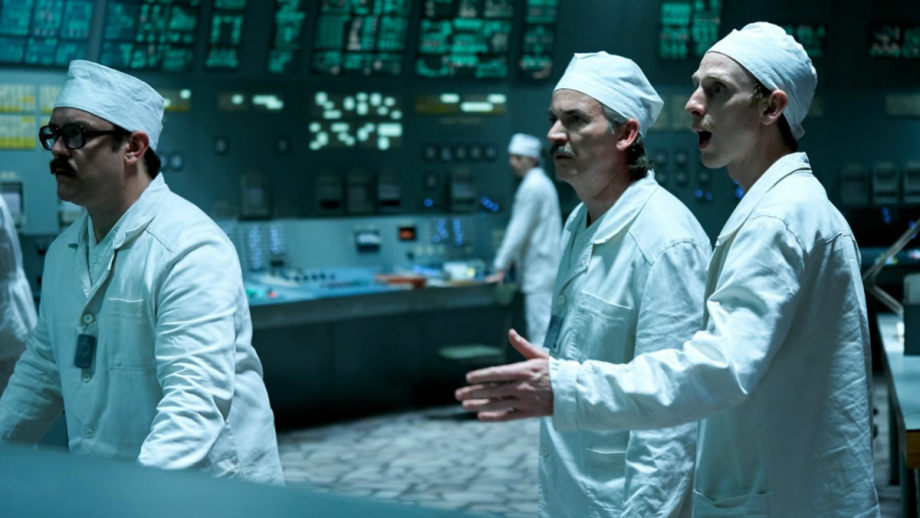 HBO’s Chernobyl asks a deceptively simple question in its first moments: What is the cost of lies? The five-part miniseries about the world’s worst nuclear disaster at the Chernobyl power plant in Soviet Ukraine investigates the concentric circles of damage after the USSR attempted to cover up malfeasance in the wake of a nuclear core meltdown. Director Johan Renck and writer/producer Craig Maizan paint the alarming historical drama with incredible dedication to accuracy, and Jared Harris shines—radiates?—as our protagonist, scientist Valery Legasov. As each of Chernobyl’s five episodes moves gradually away from the initial explosion in reactor 4, the magnitude of the show’s central question becomes unfathomably large as we think about how it extends into the present. Chernobyl may not know the exact cost of lies, but we learn that much like exposure to radiation, the harmful effects are cumulative. Just because you can’t see something, doesn’t mean it’s not killing you. 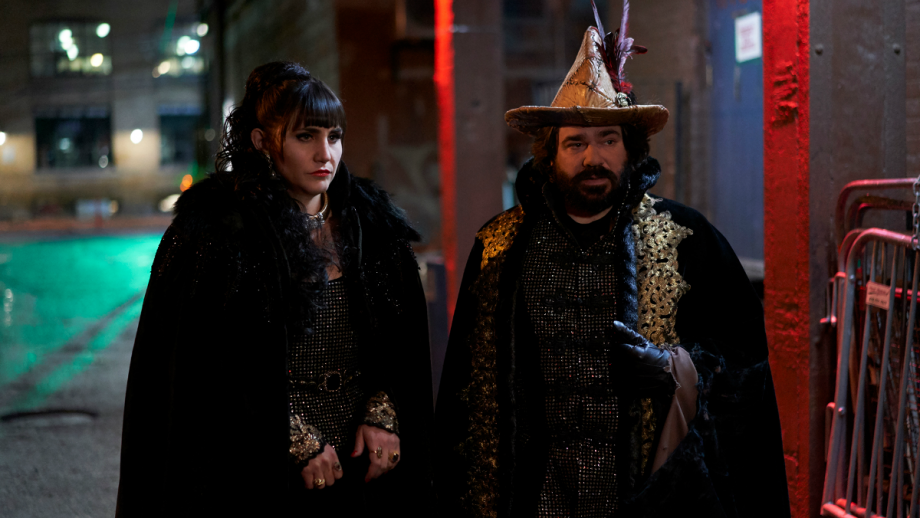 What We Do In the Shadows

Where to Watch: FX

We were cautiously optimistic when FX announced they’d be bringing Taika Waititi’s vampire comedy film What We Do in the Shadows to the small screen in an Americanized adaptation. Turns out, we had no reason to fret, because the show was one of our favorites this season. Not only does it capture the enigma of the film, but it doubles down on its dry meta humor in strange, surprising, and hilarious ways. Set in Staten Island, the show follows four vampire roommates who had known each other for hundreds of years and continue to navigate their undead lives. Throw in an episode full of hilarious cameos, a number of zany guest stars, and you’ve got yourself a budding TV classic. We couldn’t get enough. 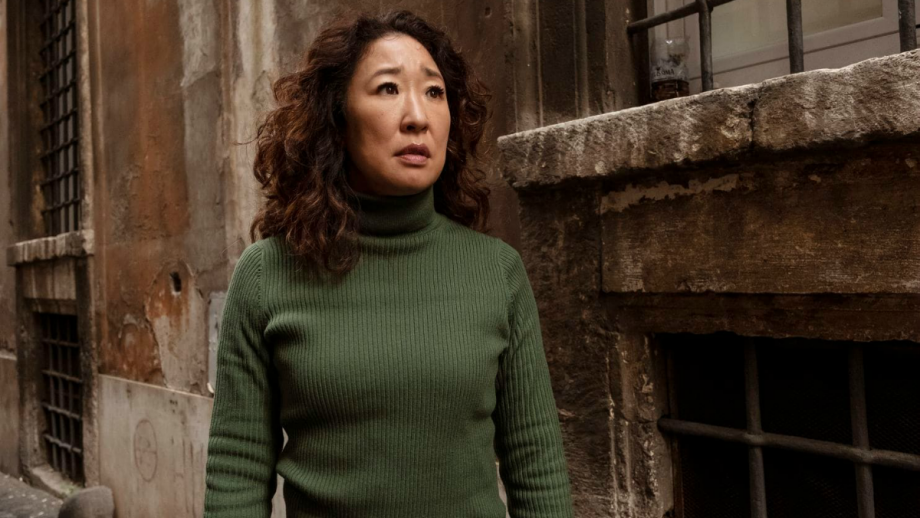 Where to Watch: BBC America

After a breakout first season, this sexy, seductive spy thriller—created by Fleabag‘s Waller-Bridge and based on a novella series by Luke Jennings—was back for an even more addictive season two. The show follows MI5 agent Eve Polastri (Sandra Oh) as she tracks the psychopathic assassin Villanelle (Jodi Comer), begetting a cat-and-mouse game that turns into a wicked obsession. In season two, the pair continues its tête-à-tête across Europe, while Eve also tracks Aaron Peel (Henry Lloyd-Hughes). She uses Villanelle’s duplicity to help her hunt, bringing the two closer together than ever. Watching Oh and Comer play off of one another is a privilege, and we can’t wait to follow Killing Eve wherever it goes next. 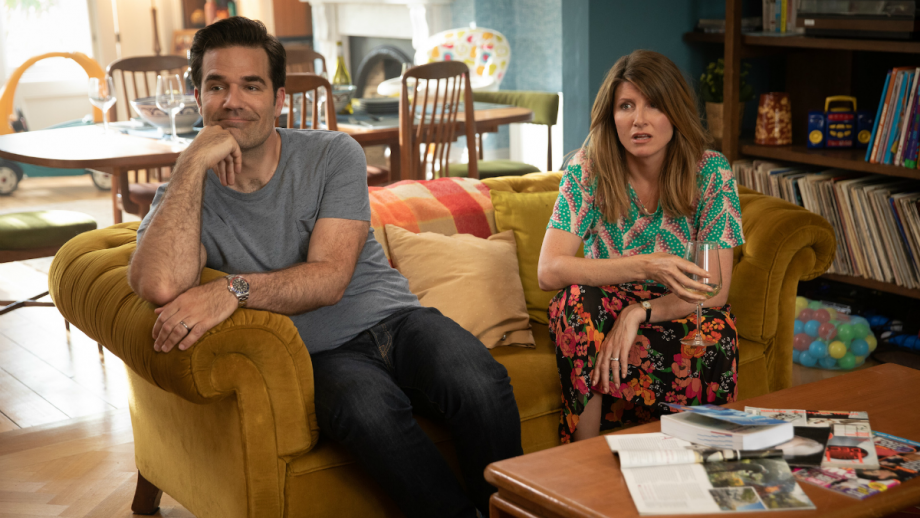 Where to Watch: Amazon Prime

The conclusion of this charming British/American TV series—starring Rob Delaney and Sharon Horgan as a couple who decide to stay together after she gets accidentally pregnant—was as strong as everything that came before it. Delaney and Horgan’s natural chemistry makes them feel like a real couple, and this final season let the actors utilize their real lives—including Delaney’s alcoholism—for content. We’ll miss these two and their quirky, weird family, but the final season—and the final moment especially—is note perfect. Bonus: The series starred the late Carrie Fisher, and the final season pays tribute to her in an incredibly moving way. 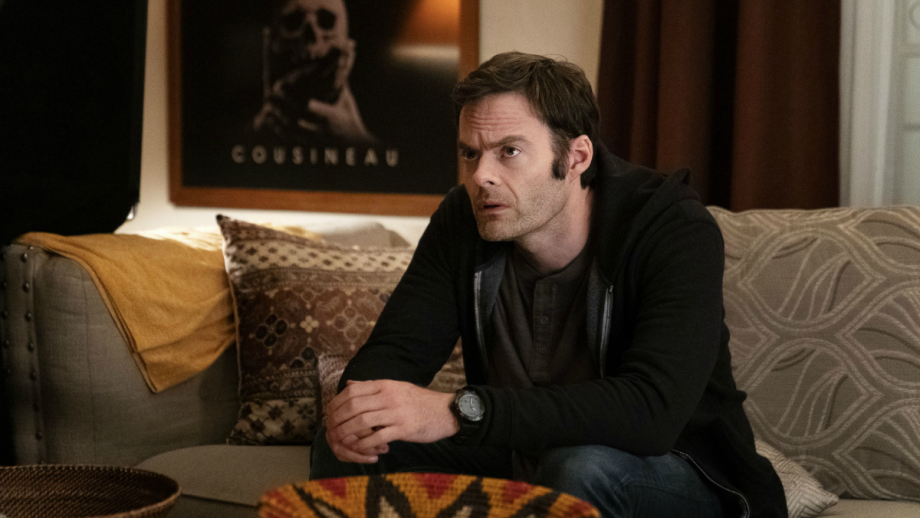 The first season of this Bill Hader-starring HBO dramedy was a minor sensation, scooping up a number of Emmys and landing on a number of best-of-the-year lists. The second season had a lot to live up to, but we had nothing to fear. It is just as hilarious and heartbreaking as the first outing, doubling down on the story of Hader’s eponymous hitman-turned-actor who’s trying to improve his life and move away from his violent past, and going in bold new directions with plenty of twists and turns we won’t spoil here. Hader and Henry Winkler remain fantastic, but the real star of the second season is Sarah Goldberg as Barry’s lover and acting classmate, who delivers monologues so sincere and empathetic that we hope she’ll be decorating her living room with awards come this fall. 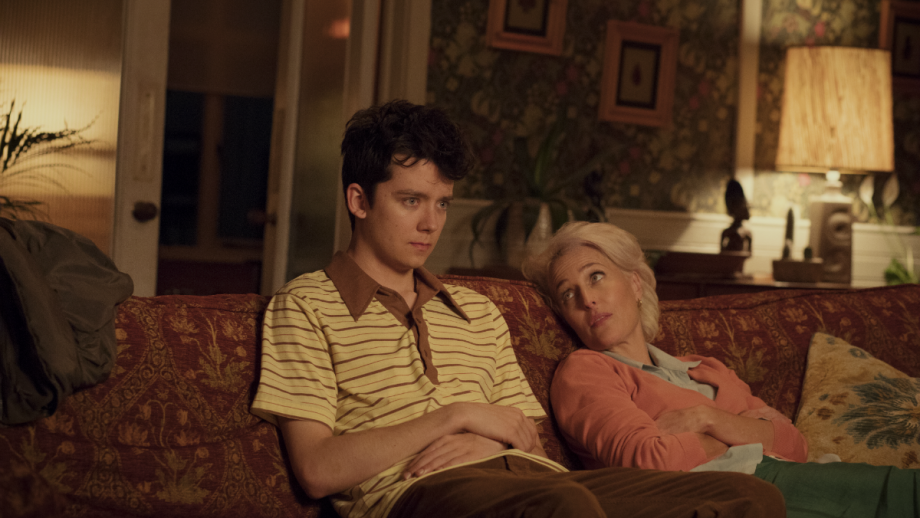 This quirky Netflix original is another addition to Gillian Anderson’s fascinating post-X-Files career, but it’s also a coming-of-age story about a young man developing into his body and sexuality in a household where sex talk is totally open. Anderson plays a sex therapist and Asa Butterfield is her teenage son who decides to set up his own sex advice business with his crush Maeve (Emma Mackey). Its out-of-time setting and charming hilarity make it unlike anything else we’ve seen this year, and the performances across the board were full of joy and talent. 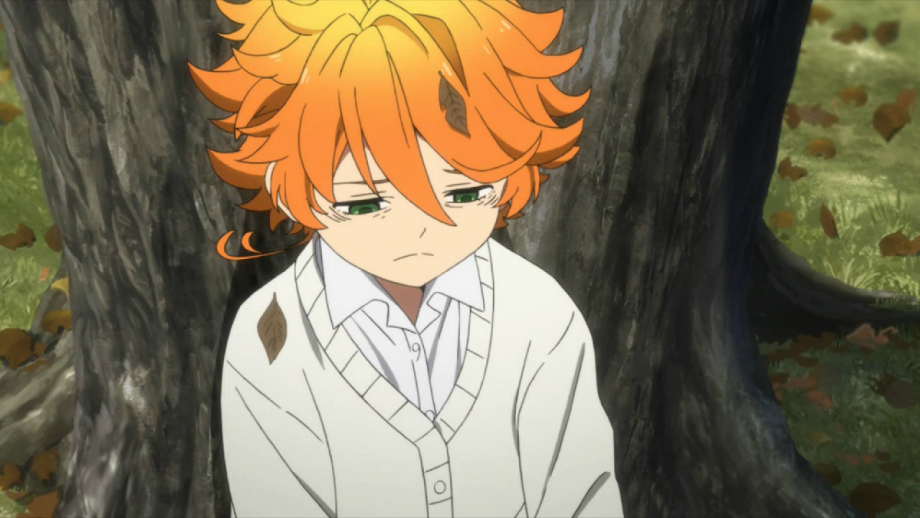 Where to Watch: Crunchyroll

Don’t let its cute looks and bubbly veneer fool you. The Promised Neverland is one of the most chilling stories of the year. Based on Kaiu Shirai’s manga of the same name, the show follows the residents of Grace Field House, an orphanage nestled on a seemingly idyllic farm where the children are raised by an attentive caretaker known as “Mother,” treated to gourmet meals, and allowed to grow up in a loving environment before getting adopted by age 12. They spend their days taking rigorous tests and are rewarded with outdoor time. There’s only one rule: never leave the orphanage. It seems simple enough, right? Unfortunately, as our heroes Emma and Norman soon discover, the children of Grace Field House aren’t being adopted at all. What’s really happening to them, which I won’t spoil here, is far, far worse. 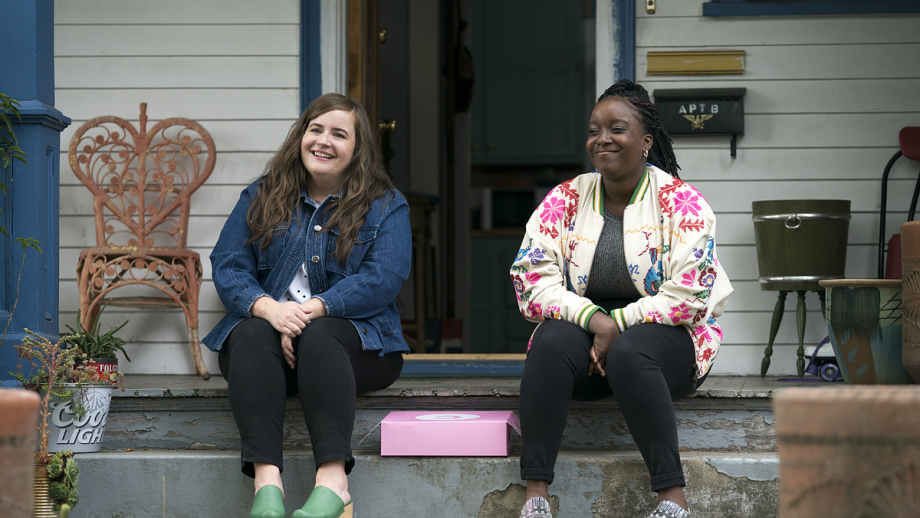 Lindy West has been a major voice in the activism realm, so seeing her personal story—based on her bestselling nonfiction book of the same name—brought to life in this Hulu series was an utter delight. Her unabashed personality and sharp insights are filtered through Aidy Bryant’s Annie, a Portland-based writer navigating her life as a plus-sized, outspoken woman just trying to break into the creative world. Along the way, she learns lessons from horrible men and her best friend Fran (Lolly Adefope), and comes into body and personal acceptance in a beautiful way that’s never really been seen on television in this way before.