Take a look at PROSTHESIS, the world’s largest tetrapod exoskeleton according to Guinness World Records, and you’ll probably feel two things. One: a primitive pang that comes with the realization that a new apex predator has just appeared in front of you, and two: the urge to jump inside of its tubular, hydraulic body so you can take the 3,500-pound beast for a spin. Although the more you watch the clip below of PROSTHESIS in action, the more overwhelming that latter feeling will become.

Guinness World Records recently posted a video on its YouTube channel of PROSTHESIS, a gargantuan mechanical tetrapod billed as “a racing monster machine.” At over 12 feet tall, more than 16 feet long, and 18 feet wide, PROSTHESIS is not only the largest tetrapod exoskeleton currently walking the face of Earth, but is also on par with the largest elephants ever recorded—at least in terms of size. In regards to weight, elephants, like African Bush elephants that are, on average, about 13,000 pounds, still have this mechanical mimicry of a mammal beat by a mile.

PROSTHESIS was built Jonathan Tippett, a mechanical engineer from Vancouver, Canada who dedicated 13 years of his life to the project. “I wanted to build a machine that celebrated the age-old pursuit of physical mastery and human skill,” Tippett told Guinness World Records. He added that he wants to use machines like these, “to create an entirely new sport [that] will pit pilot against pilot in massive, agile, high-powered, all electric, off-road running machines.” 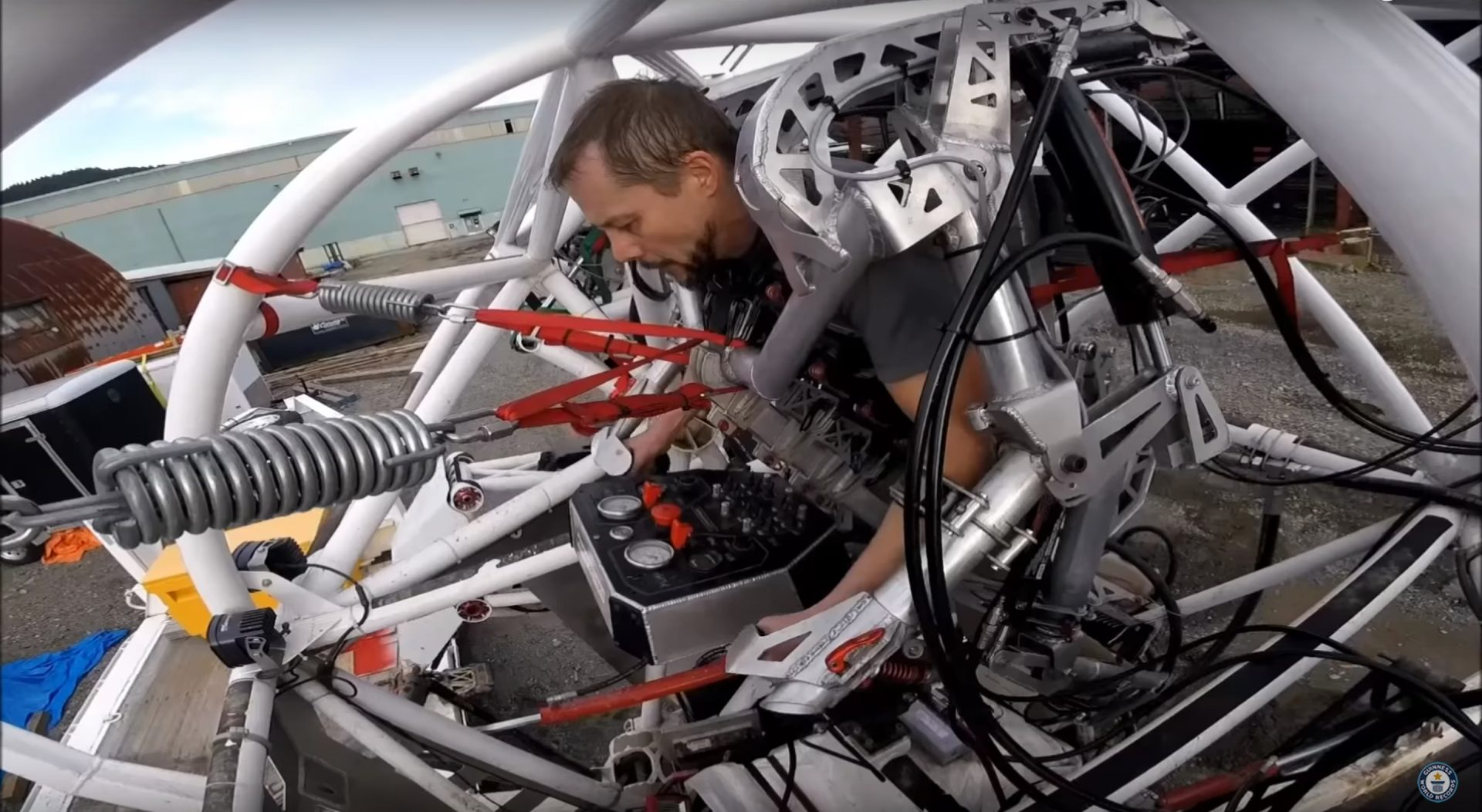 Tippett piloting PROSTHESIS with his body.

If that sounds like the blueprint for some kind of mech racing league, that’s because that’s exactly what that is. Tippett has made it clear that his goal is to create a racing competition for mechs that are 100% controlled by human pilots, thusly allowing for an avenue that tests “human skill and the pursuit of physical mastery in a world where increasing automation threatens to undermine this essential human experience.” (This quote is not taken directly from Tippett, but from a profile written about him, which can be found here.)

Speaking of 100% controlled by human pilots, PROSTHESIS cannot operate at all without somebody inside of it. The machine’s mega appendages are moved in accordance with the pilot’s own appendages, which are fit into a kind of mini inner-exoskeleton reminiscent of those in the Armored Personnel Units from The Matrix. The exoskeleton strapped around the pilot converts their movements into moving instructions for the larger mech, and the result is a surprisingly dextrous walking machine that will apparently be ready to race its equally massive brethren one day. Which sounds like a ton of fun to watch, unless an advanced version of one of these humanoid bots finds its way into a PROSTHESIS cockpit.

What do you think about PROSTHESIS? Are you happy to hear that this 3,500-pound mech can only be controlled by a human pilot, or would you prefer if some kind of highly reliable AI were in charge? Let us know your thoughts in the comments!