Artificial neural networks, or machine learning systems that are able to identify patterns in data and then use those patterns to achieve programmed goals—are rapidly becoming more and more ubiquitous. But even though we’ve seen them used for everything from implementing deepfake faces to generating weird dog-hybrid creatures, they’re still being deployed in unexpected, novel ways all the time. Like they are here in this “upscaled” 4K 60FPS version of an iconic short film from the late 19th century.

If you recognize the video, or its title, L’arrivée d’un train en gare de La Ciotat (translated as Arrival of a Train at La Ciotat), that’s probably because it was created by the Lumière brothers, two of the first filmmakers in history to pioneer moving pictures. This particular short film was released in 1896 in France, and stands as the “first-ever public exhibition of motion pictures.” The video may also be familiar because there’s an urban legend that says the audience that first viewed Arrival of a Train at La Ciotat screamed and ran from the train because they thought it was really coming through the wall.

This upscaled version of the Lumière brothers’ film, which comes via Techspot, was made by Denis Shiryaev, a Russian man who is, presumably, some type of programmer. We say “presumably” because there’s very little information on Shiryaev that’s readily accessible, and the only description he has on his YouTube channel is one sentence in Russian that translates to “I love the internet and mom.”

According to the video’s description, Shiryaev used a program called Gigapixel AI from Topaz Labs to translate the relatively grainy original film into the sleek, smooth video above (top). In terms of how Gigapixel’s neural networks performed that translation, a description of that process provided by Topaz itself is probably the best explainer:

“To summarize, we train an Artificial Neural Network with millions of blur-sharp image pairs. The neural network will eventually ‘remember’ what the sharp image should look like if it sees a blurry image. After months of training, we then upload a blurry image to the neural network and ask it to sharpen it. The network will recall what it has learned from all the image pairs it trained with and will attempt to apply the same changes to the new blurry image that it saw in previous sharp images.”

Toward the end of Shiryaev’s video, at a little over a minute in, there’s a side by side comparison of the original film with the upscaled version, and there’s no question the latter does away with a lot of the “noise” from the former. Although what’s perhaps even more impressive than the quality bump Shiryaev and Gigapixel AI were able to generate, is the quality of the original film itself. Arrival of a Train at La Ciotatwas was made 124 years ago, and the Lumière brothers even eventually showed it in 3D. Which stands as a testament to the power of biological neural networks, which are, at least for the time being, still impressive in their own right. 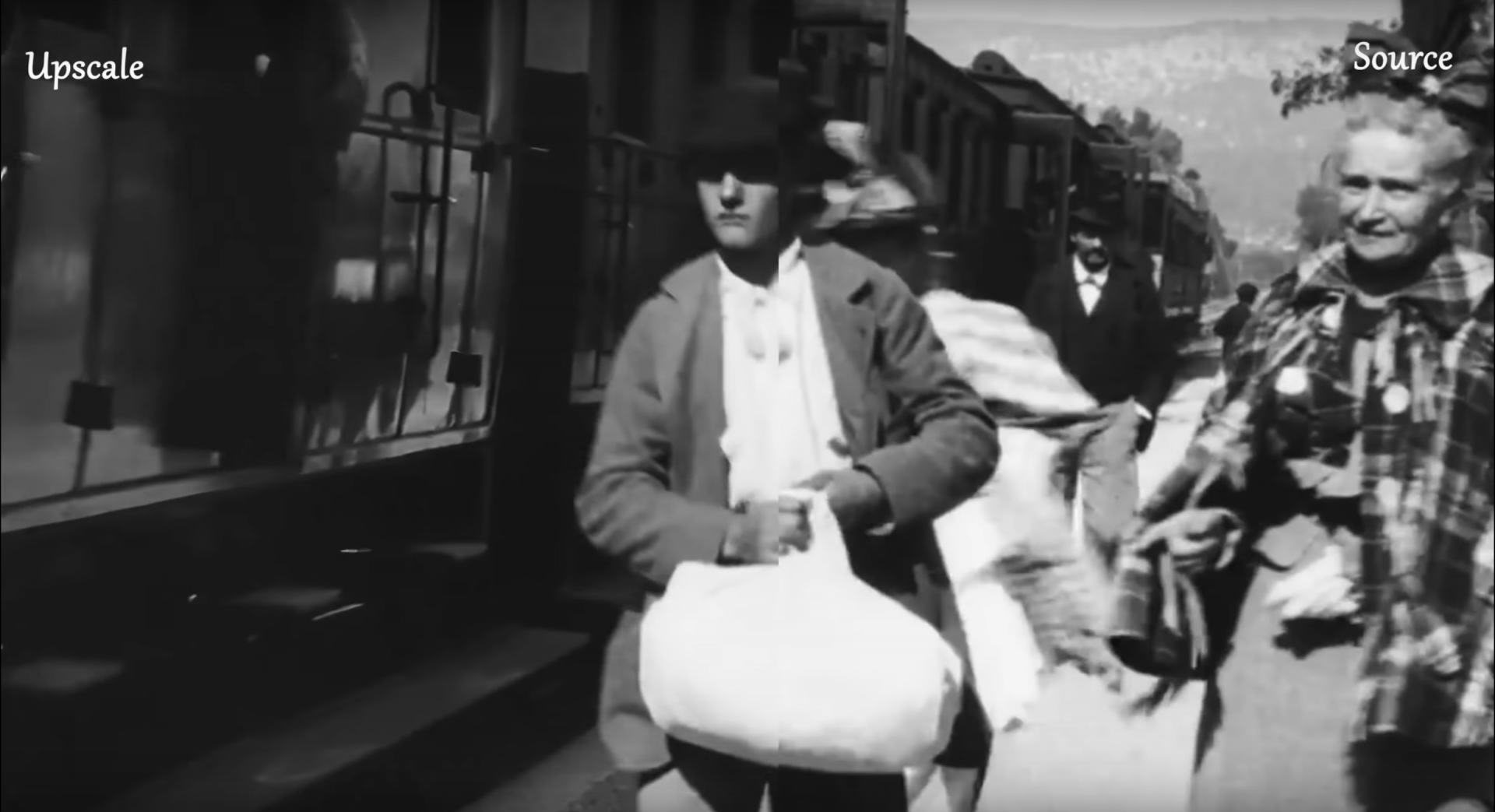 The “upscaled” version of the film (left) versus the original (right). Note the split right down the middle of the picture. Denis Shiryaev

What do you think about this train video enhanced using artificial intelligence? Can you think of any wild, new applications for neural networks that haven’t been tried yet? Upscale your opinions in the comments!