SpaceX's Starship Prototype Unveiled, Aims to Give You Hope - Nerdist

SpaceX’s Starship Prototype Unveiled, Aims to Give You Hope

Preserving the light of consciousness now seems to be the implicit motto of SpaceX, the aerospace company responsible for developing the most cutting-edge rockets in the industry. The company has been steadily iterating its Falcon 9 and Falcon Heavy rockets for full and (relatively) rapid reusability, and now CEO Elon Musk has unveiled an assembled prototype version of its behemoth pièce de résistance, Starship: It’s 160 feet tall, it’s made out of stainless steel, and it’s going to take people to Mars to not only to explore the Red Planet, but also provide a plan B for humanity.

The unveiling of Starship occurred on September 28 in Boca Chica, Texas, on a windy Saturday night. Musk, the engineer entrepreneur who’s been doing everything from developing cyborg interfaces to building electric cars, took the stage in front of an enthusiastic audience and began — after noting the heavy winds — by saying that Starship is “the most inspiring thing that I’ve ever seen.” Against the nearly twelve-story rocket, Musk, who’s about 6’2,” was dwarfed into a tiny head poking out of an all-black suit.

It’s no wonder Musk seemed so tiny compared to Starship though, because its stats, according to SpaceX’s profile for the vehicle, are so out of the realm of ordinary experience that they’re hard to grasp. Not only is Starship 160 feet tall, but when stacked on the first stage rocket that’s going to take it into orbit, the entire system skyrockets (ever so much pun intended) to 383 feet tall. That’s 27 stories tall, assuming a standard 14-foot-tall story.

On top of being monumentally tall, Starship will also be monumentally heavy. Starship plus its booster, dubbed Super Heavy, will have a gross weight of roughly — wait for it — 6,613,867 pounds. For reference, a Boeing 747 aircraft is roughly 850,000 pounds. That’s nearly eight 747s, all getting blasted off into orbit simultaneously.

The Herculean task of lifting Starship into orbit will be shouldered by a circular array of 37 Raptor rocket engines on the bottom of Super Heavy (there are another six that power Starship itself). The rocket engines, powered by a mix of cryogenic methane and liquid oxygen, will produce roughly 16,000,000 pounds of force, which is 160 times more than the world’s most powerful jet engine. 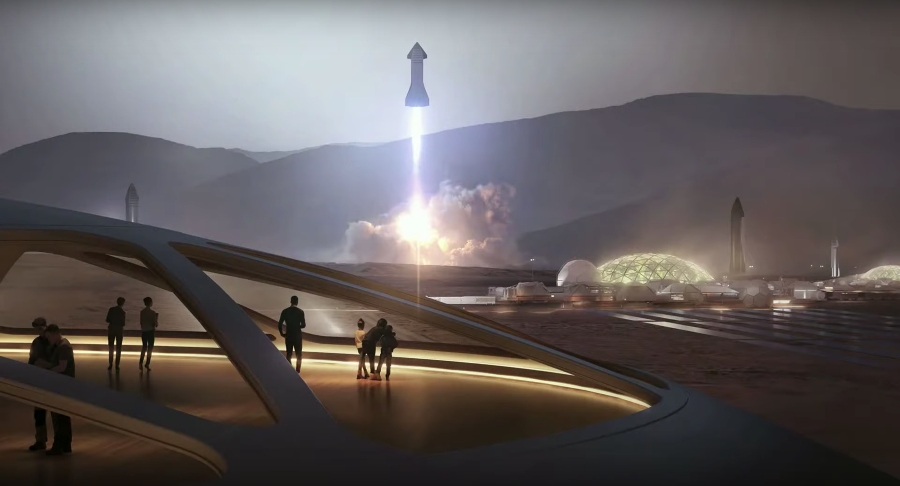 A vision of what a Mars base/early city could look like according to SpaceX.

But while the specs for Starship are mind-bendingly large, it’s the ship’s missions that’ll really matter. Starship will ultimately be able to transport roughly 300,000 pounds into orbit, which will be made up of both passengers and cargo. After Starship is refueled in orbit, it will then be able to go on to deliver its cargo and passengers to the Moon or Mars, and hopefully one day, other star systems. Although Musk does say unequivocally in his presentation that SpaceX’s mission at this point is “to find the fastest path to a self-sustaining city on Mars.” He added that “This is the fundamental thing.”

And while Musk doesn’t explicitly mention SpaceX’s interstellar aspirations in this presentation, he did note in a 2012 interview with New Scientist that “having a base on Mars, where there is a lot of travel to and from Earth, will create a powerful incentive for developing technology that will enable us to travel to other star systems.” And of course the first step to a base on Mars is having a rocket big enough to bring a lot of people there. Also, the thing’s name is Starship.

The vision, as visualized in the inspirational clip above, is to have Starship take off from its landing pad, be thrusted into orbit around Earth by Super Heavy, and then go on to refuel by attaching itself to an orbital “tanker” ship already in orbit. From there, Starship goes on to complete its mission, wherever that may be, as Super Heavy finds its way back to Earth’s surface, and gently touches down smack dab in the middle of a SpaceX landing pad.

After discussing Starship’s specs, as well as the details behind the physics that make the massive reusable rocket work, Musk said, with a bit of consternation on his face, that “As far as we know, we’re the only consciousness, or the only life, that’s out there….”  adding later in the speech that “I think we should really do our very best to become a multi-planet species, to extend consciousness beyond Earth, and we should do it now.”

What do you think of this Starship presentation? Does the sight of this steel beast get you seriously revved up for space travel? Give us your thoughts in the comments!