Though it first came out 25 years ago, Super Mario RPG: Legend of the Seven Stars remains one of the most innovative and entertaining games across the Mario universe. A number of factors contribute to the overall success of the game. The story sees Mario and four companions joining forces to defeat our new Big Bad the Smithy Gang and collect the titular Seven Stars to restore order to Mushroom Kingdom and far beyond. One standout element of SMRPG’s excellence is the makeup of your party. Mainly the two new faces: Mallow and Geno. 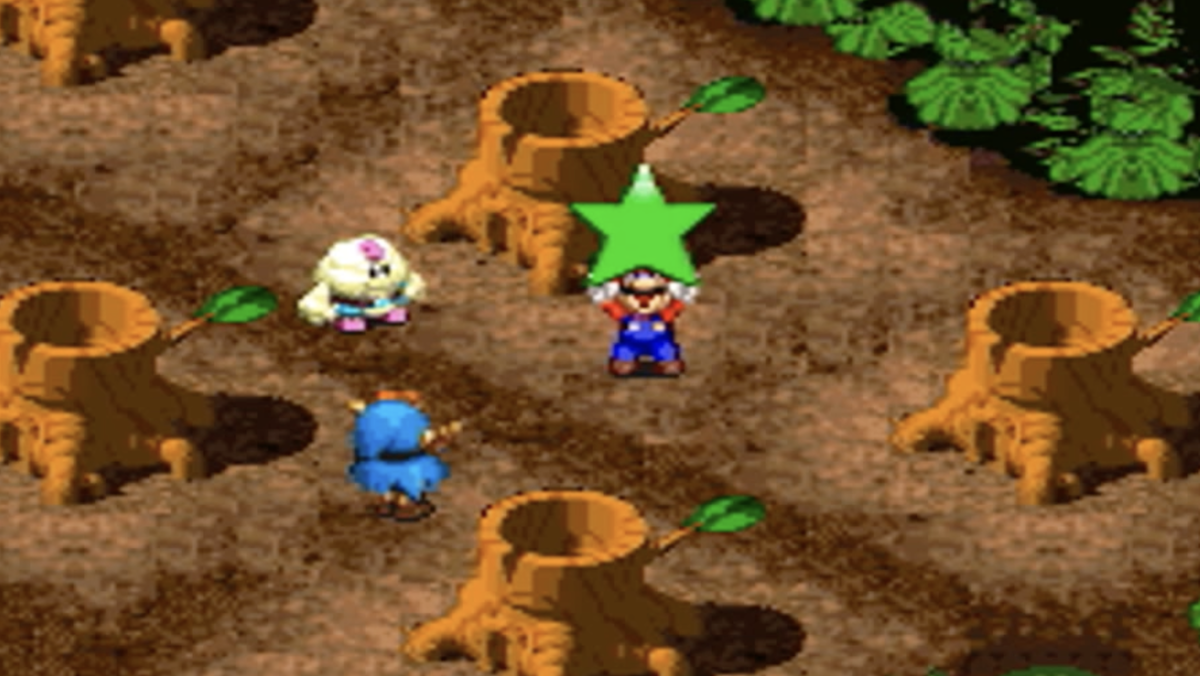 As in many RPGs, your party in SMRPG expands as you progress through the game. In time, Princess Toadstool and foe-turned-ally Bowser both join forces with Mario. But before either, comes Mallow, a so-called frog of unknown origins. Mallow, who looks like a tiny cloud with arms and legs and striped pants, is an emotional wreck with a heart of gold. When you first encounter Mallow, you immediately discover the power of his outbursts. He covers entire landscapes in rain when he cries. (A skill that later comes in handy when he rains HP down on your party in battle.)

Mallow never really loses his sensitivity, but his character does become more dynamic over the course of the narrative. Part of that pertains to his true origins. Though it’s immediately obvious to the player, Mallow is distraught when he finds out he’s not a frog; he was merely taken in by the frog sage Frogfucius, who found Mallow in a river as a baby. After telling Mallow the truth, Frogfucius encourages him to join your party. Mallow does so in hopes of finding his family and, naturally, helping Mario. 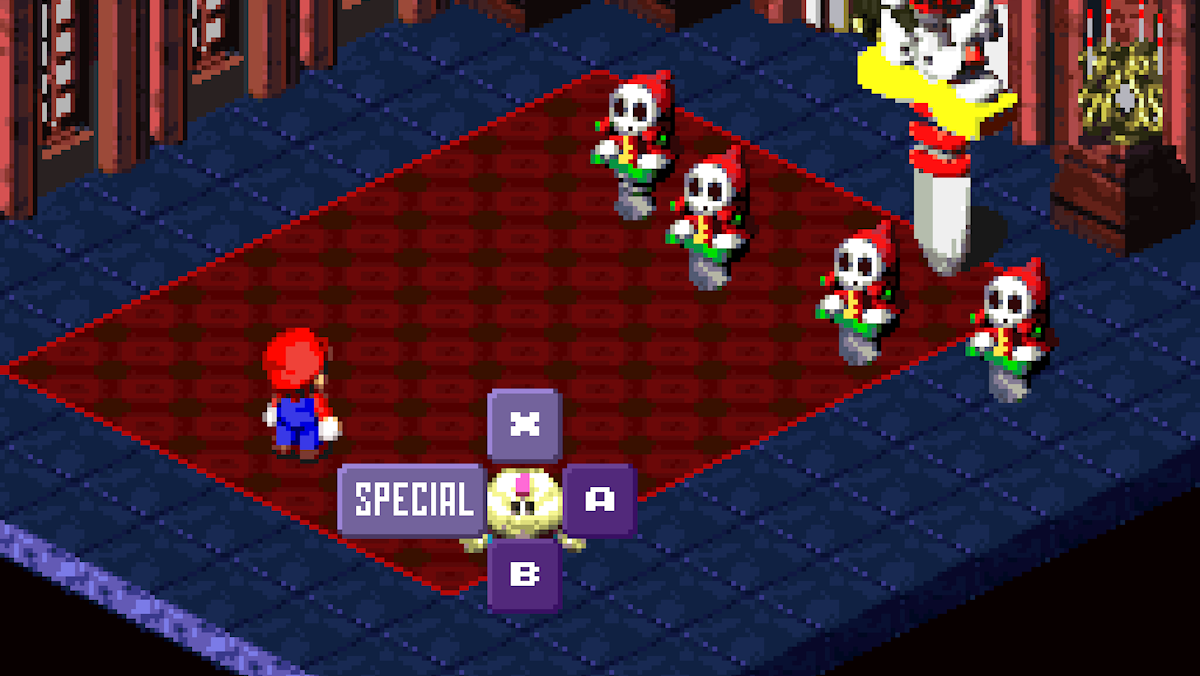 For some time, Mallow’s lineage remains a mystery. The moment you hit Nimbus Land late in the game, though, and see that he bears a striking resemblance to its cloud-like residents, you can piece together where he came from. Mallow is, in fact, the Prince of Nimbus Land. His reunion with his parents is predictably emotional, and when Mallow learns he’ll have a home to return to after his adventure with Mario is done, he becomes empowered. He’s braver and sassier; though you may not be putting him in battle too often, his dialogue is consistently fun, and his interactions with NPCs are downright delightful.

Geno’s origins are simultaneously more complicated and less important than Mallow’s. They don’t inform his character to the same extent, in large part because there’s not a lot to his character. He’s largely motivated by his mission: to restore the Star Road, which the Smithy Gang destroyed in their attack on Bowser’s castle. The attack scattered the titular Seven Stars you’ve been tasked with retrieving throughout the world; this made it so that wishes, which land on the Star Road, could no longer be granted.

But for a prolonged period, none of that really matters. What matters is that Geno takes the form of a toy wizard, enters the Forest Maze—the game’s most extensive puzzle, accompanied by the game’s best music—and, once found, joins your party. As you share the same goal of defeating the Smithy Gang, he’s set to accompany you through the rest of the game. 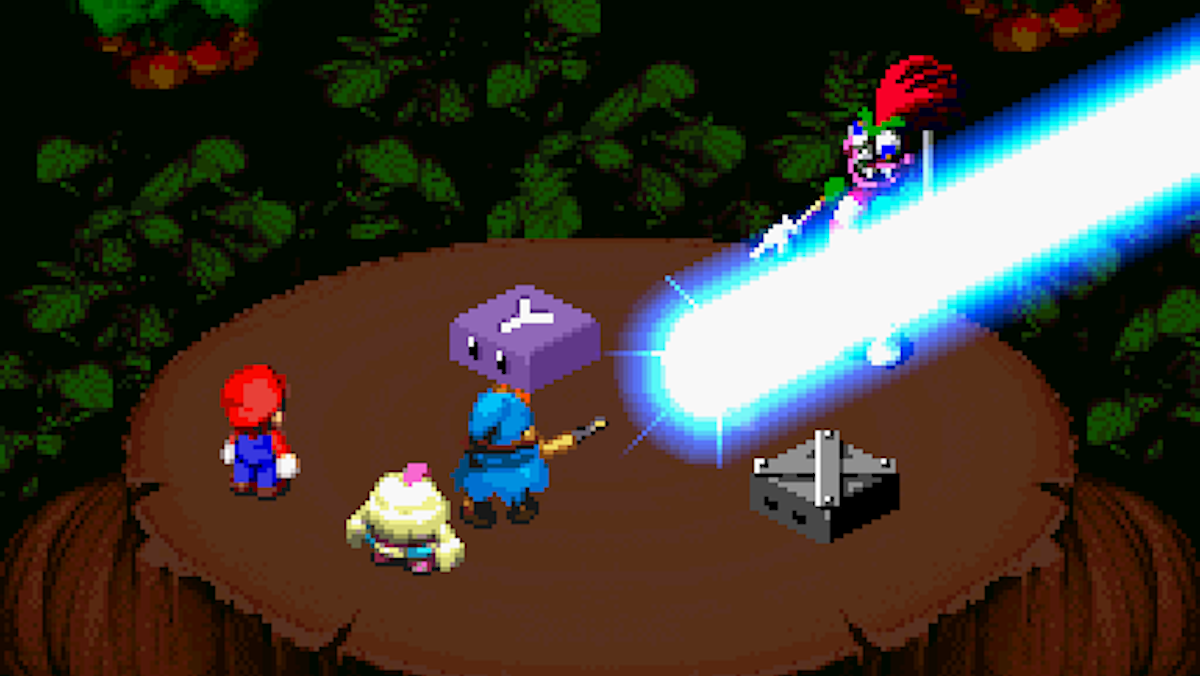 The moment Geno joins you in battle, it’s much easier to defeat opponents that would otherwise pose major problems. Geno’s special attacks set him apart from your other party members. If you can time your hits just right with Geno, you can dole out damage that outclasses what Bowser and even Mario can manage. (Unless you equip Mario with a fiendishly hard-to-find armor/weapon combination, but that’s a story for another time.) In an objective sense, Geno is an essential party member. And subjectively, he’s my favorite character in SMPRG. As is the case with every loose thread in the game, Geno’s story comes to a satisfying conclusion. But it also has the most intriguing, enjoyable beginning. With the punches he packs and his distinct appearance, he’s just plain fun to have around.

To date, Mallow and Geno haven’t appeared as playable characters in any other Mario game. Given their respective richness and abilities, that’s a shame. They do both pop up in Super Smash Brothers Ultimate as spirits; but how much more fun would it be if you could cry your way to higher HP in Ultimate with Mallow? Or wield Geno’s star gun in the next incarnation of Mario Kart? If nothing else, both boys would be a natural fit for a Paper Mario adventure. Until that happens, at least we have their origins, the option of returning to them on Wii U, and the kind of game-specific nostalgia that never really goes away.