There’s a reason people liked Rogue One. No, it wasn’t just because Star Wars fans be Star Warsin’; it was that we loved seeing the 1977-era version of the Galaxy Far, Far Away brought to life once more. George Lucas ushered in a space opera renaissance in the late-70s. In an effort to capture some of that $$$, other filmmakers did knock-off space adventures. Generally not as good, but usually with that same vibe. 1980 alone had roughly 19 million pretenders. But what if there had been some more in that same style?

What if we got more ‘70s Star Wars, starring Billy Dee Williams as Lando Calrissian? Thanks to graphic designer Peter Stults, now we do. As part of a “we’re in quarantine” project (and who could blame him), Stults imagined a trilogy of Lando movies from the late-‘70s. Called The Calrissian Chronicles, they’re all truly gorgeous, colorful and creative.

During quarantine I imagined we lived in a world where we had a Lando Calrissian spin-off series pic.twitter.com/6MDe7hrXYX

So, at first blush, these are just super cool. Obviously. But there’s a lot we can glean from each of the posters, including the supporting actors and some of the guest characters. We got our man William December Williams looking awesome on all three, naturally. But the first two feature Shirley Bassey as L3-37. L3, of course, is the droid who became the brain of the Millennium Falcon in Solo: A Star Wars Story. That’s her with the bassoon-looking rifle in the first poster, and the batarang in the second.

Bassey is singing powerhouse who most famously performed the title tracks for three different James Bond movies. Those, of course, are Goldfinger, Diamonds Are Forever, and Moonraker. 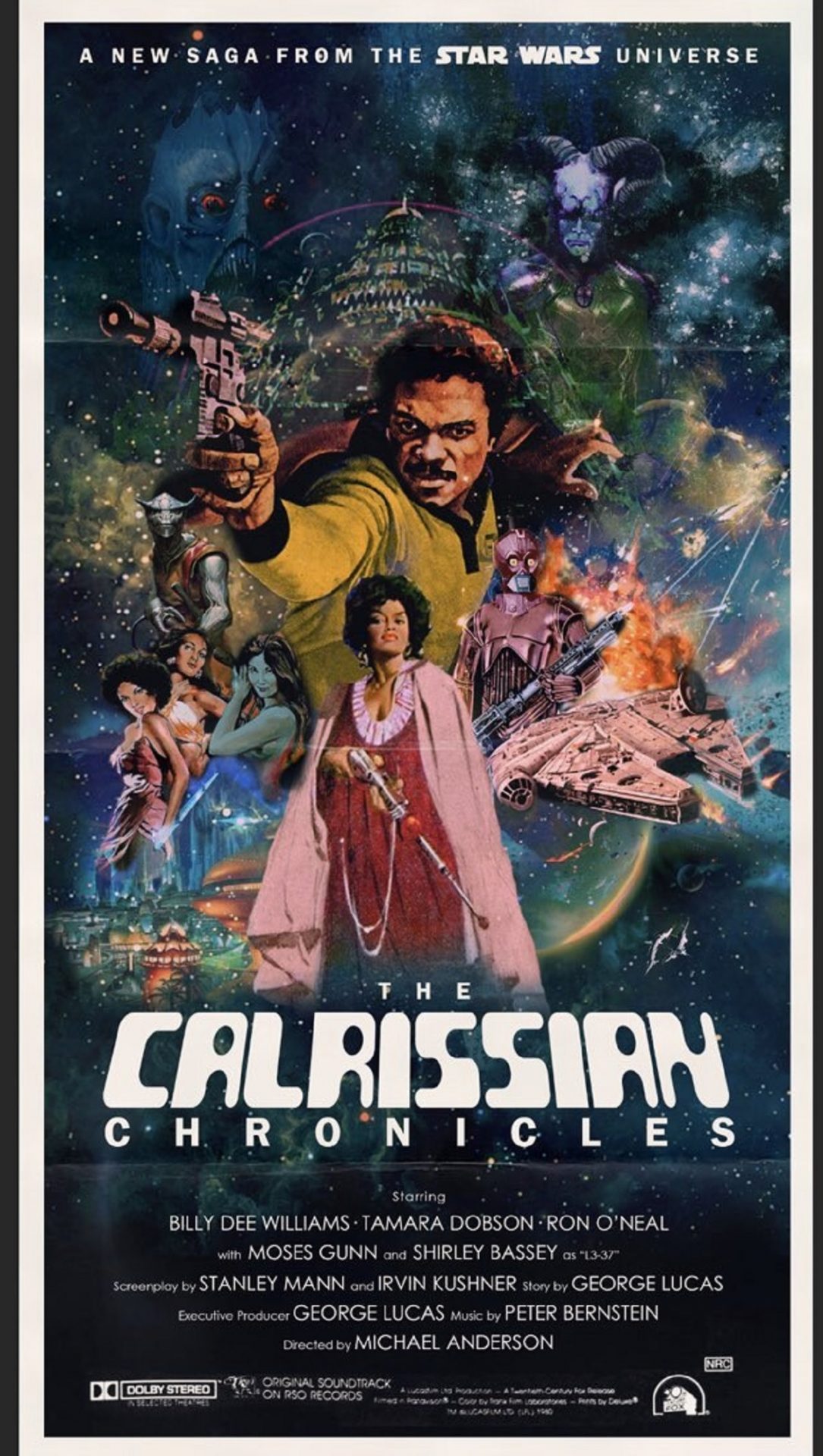 The first part has a guest cast full of popular actors from Blaxspoiltation movies. Tamara Dobson played Cleopatra Jones in the titular action movie and its sequel. She was later a regular on the post-Star Wars TV show Jason of Star Command. Ron O’Neal played Youngblood Priest, the anti-hero of the Superfly franchise. And Moses Gunn has a very long career, including appearances in Shaft, Rollerball, and Ragtime.

The second movie clearly means to bring in the samurai/yakuza movie craze of Japan. Along with Williams’ Lando and Bassey’s L3, the cast includes Vonetta McGee, another well-known actress in genre fare like Blacula, Hammer, and later Repo Man. But! The other cast members are Japanese genre superstars. Tatsuya Nakadai starred in several Akira Kurosawa movies, including playing the hothead baddie in Yojimbo and Sanjuro, and the psychopathic samurai in Kihachi Okamoto’s The Sword of Doom. In 1980, Nakadai starred in Kurosawa’s Kagemusha, a movie executive produced byyyyyy…. *fan fare* George Lucas! 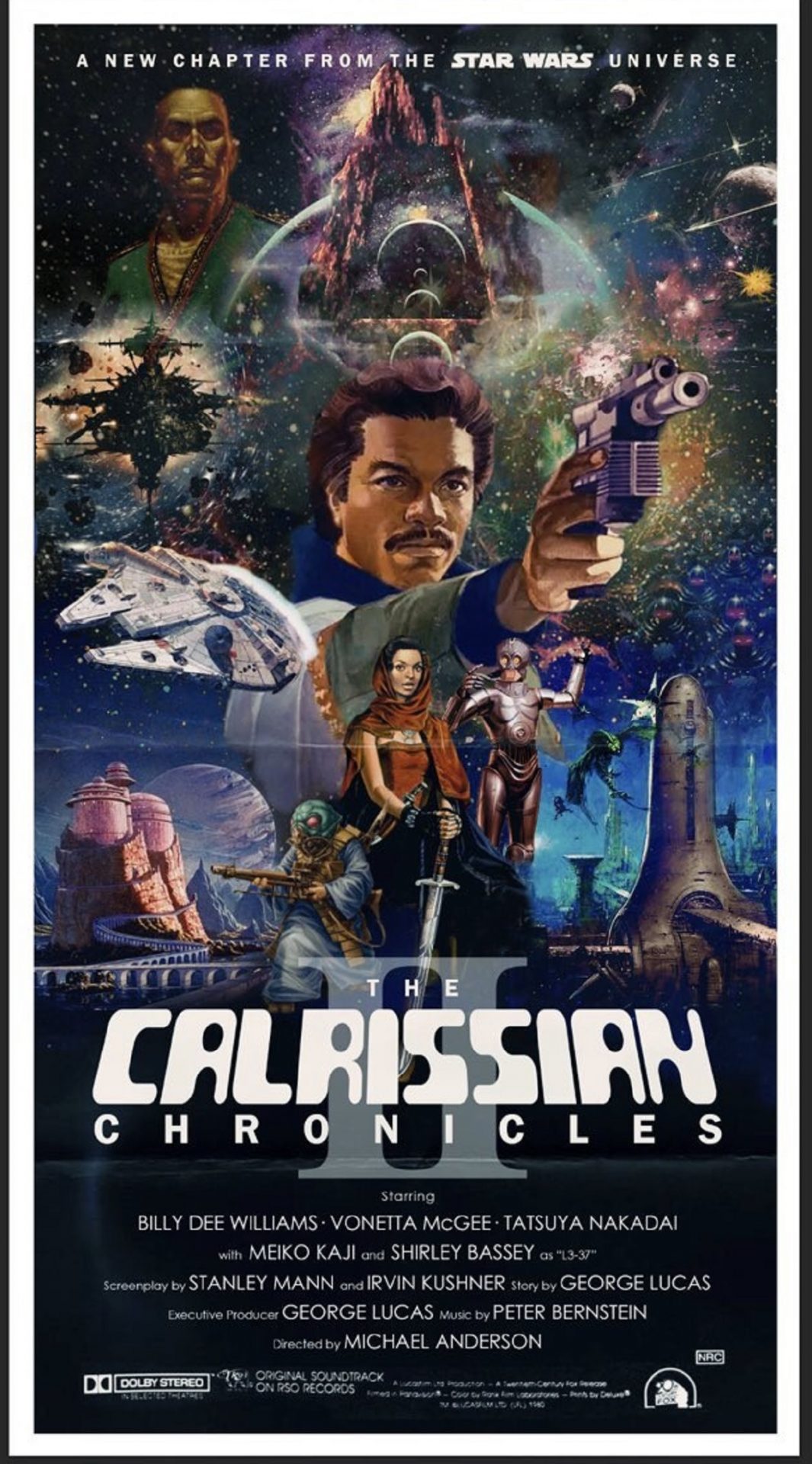 The other name is Meiko Kaji. Kaji is probably the most famous Japanese actress of ‘60s and ‘70s genre flicks. She played the titular avenger in the Lady Snowblood movies and the titular terror in the Female Prisoner Scorpion series. She also appeared in a couple of movies in the Battles Without Honor and Humanity series and dope one-offs like Blind Woman’s Curse and Yakuza Graveyard. And not only that, she was a recording star. She sang the theme songs to most of her movies; a couple of those ended up in Kill Bill. Meiko Kaji flat-out rules.

Finally, we have the one that gets the closes to established Star Wars canon. The lone name you might not recognize is Angela Brent, a very obscure actress who has only one credit to her name. The 1975 Nazisploitation/Blaxploitation hybrid The Black Gestapo. Not a joke, a real movie. Way to get weird, Mr. Stults. It also stars Robert Urich, he of Vega$, Spenser: For Hire and Ice Pirates fame. 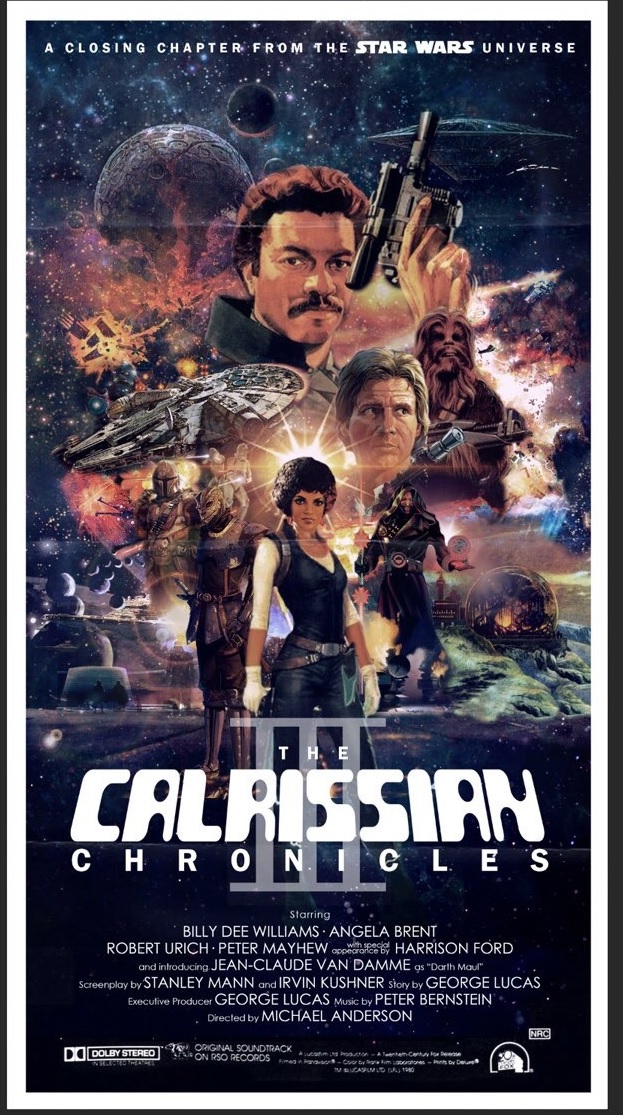 As for in-continuity stuff, it features Peter Mayhew and Harrison Ford, and does not have Bassey’s name on the credits. We can therefore assume this story takes place after Solo. It also says the best thing ever, “and introducing Jean-Claude Van Damme as Darth Maul.” Now that is some hilarious, pie-in-the-sky casting. I love it! Also, that sure does look like the Mandalorian himself there on the left. Lando would have his hands full there.

Couple other takeaways: 1) all three parts are directed by Michael Anderson. Anderson was the British director of 1976’s Logan’s Run, the closest thing to space opera in the pre-Star Wars world. The scripts for all three are by Empire Strikes Back’s director Irvin Kershner (incorrectly spelled “Kushner” here) and Stanley Mann, the writer of stuff like Omen II: Damien, Conan the Destroyer, and Firestarter. And finally, the score for all three is by Peter Bernstein, a composer of a number of film and TV projects, but most relevantly, both of the made-for-TV Ewok Adventure movies.

It’s also just too perfect. There’s so much in all of these posters and we only wish these movies could exist in real life for us to know and enjoy.