We’re pretty darned excited for the return of Star Wars: The Clone Wars for 12 episodes on Disney+ on February 21. Speaking personally, it’s the show that got me back in to the franchise following some prequel fallout. Not only did the show reignite my love of galaxy’s that are real far away, but it made me enjoy the prequel era! How did that happen? Oh, through being excellent. Right.

But if you’ve never seen the show and want to get caught up before the final episodes drop, it can feel pretty daunting. 121 episodes across six seasons so far is a mighty tall order. Luckily both Disney+ and StarWars.com have provided their lists for essential episodes. There’s surprisingly very little crossover between the two lists, so I’ve melded them like a good Grey Jedi into a definitive list of 35 episodes (10 arcs and 5 standalones) as a primer. Shall we dive in? (And all of these are on Disney+ of course.) 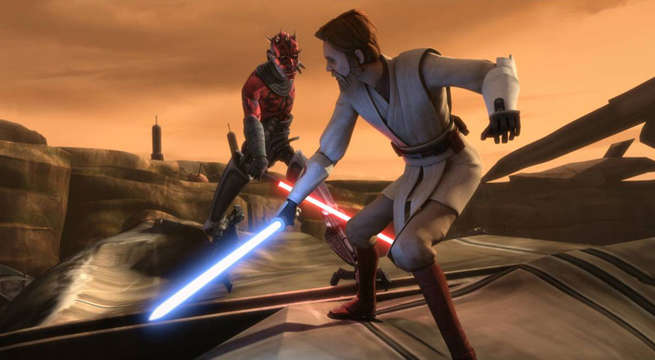 LucasfilmNote: the episode order of The Clone Wars is notoriously weird. We’ll discuss them in release order, but for story chronology, click here!

The first episode of the series proper actually takes place chronologically after a season three episode. Weird. But it works as a raucous and exciting starting point to the animated adventures. In it, Jedi Master Yoda has to face off against would-be Sith apprentice Asajj Ventress, one of the series’ most interesting characters.

This episode is supremely important. While the movies had plenty of clones, without The Clone Wars, we wouldn’t care about any of them. Much less count them among our favorite characters. Dee Bradley Baker provides the voice for all of the Clones and this is his first tour de force. Commander Cody and Captain Rex have to lead a small unit of rookies through a pitched battle with droids. It’s a tense and surprisingly moving episode, and one that showed the early promise of the idea.

Though The Clone Wars has a great roster of main characters, it’s the smaller arcs with supporting Jedi that make up some of the show’s best. Here we have Kit Fisto (the tentacle-headed guy) and his former padawan Nahdar Vebb chasing Trade Federation Viceroy Nute Gunray to a remote world. Soon they realize it’s all a trap and this is the lair of General Grievous. Grievous is on the outs with Count Dooku and the general decides to make his mark through murdering some high-level Jedi.

The first essential arc in The Clone Wars is a true epic. It starts with Padme spying on a senator who may have Separatist ties. That leads the Jedi to a plot involving a giant droid factory on Geonosis, the site of the first Clone battle in Attack of the Clones. It gets real dark; eventually Anakin, Obi-Wan, and Cody discover Geonosian brain worms have created zombies, and the Jedi might be next.

I love it when the Star Wars universe steers into the fact that George Lucas based the first movie on Akira Kurosawa. And, yes, Jedi are space samurai; Jidaigeki is the Japanese word for “era dramas” that were often samurai movies. But Kurosawa didn’t only make samurai movies. Case in point, “Lightsaber Lost” finds Ahsoka on Coruscant tracking the pickpocket who stole her lightsaber. This is just like Kurosawa’s movie Stray Dog in which a rookie police officer has to find his stolen pistol.

Mandalore became one of the most important planets in all of Star Wars over the years. Not to mention how popular Mandalorians are these days. And while the design of Boba Fett’s armor is what sparked this interest, it’s the Clone Wars that made people fans. This trilogy introduces us to Duchess Satine of Mandalore and we learn of her and Obi-Wan’s tragic, unrequited love while he protects her from the evil Death Watch. Obi-Wan and Satine’s story is truly outstanding.

These two episodes from season two aren’t about the furthering of some greater plot thread or introducing any big high-roller in the franchise. But what makes the two Zillo Beast episodes important is they deal with the moral implications of a galaxy-wide war. The Republic’s new droid-annihilating weapon awakens a gargantuan creature from hibernation. Mace Windu and Anakin have an ethical quandary: should they protect this creature, the last of its kind? Or should they kill it to aid a people who would be good political allies? It’s a tough one for sure, especially for a show ostensibly aimed at kids.

A sort of spiritual sequel to “Rookies,” this episode is another base-under-siege story finding Obi-Wan, Anakin, Jedi Master Shaak-Ti, and a battalion of Clones defending the clone facility on Kamino from General Grievous and Ventress’ forces. It’s another outstanding battle episode, something this show did better than maybe any show ever.

The third season of The Clone Wars introduced some truly trippy wrinkles in the force. One major one happened in this trilogy. Darth Sidious (it’s Palpatine!) orders Dooku to eliminate the ineffective Asajj Ventress. When he fails, she seeks aid from her clan the Nightsisters of Dathomir. It’s here we learn the women of Dathomir are strong with the force and become a coven of witches. The men are all like Darth Maul and born to servitude. Maul’s brother, Savage Opress, becomes Dooku’s new apprentice while secretly searching for Maul at the behest of the Nightsisters. 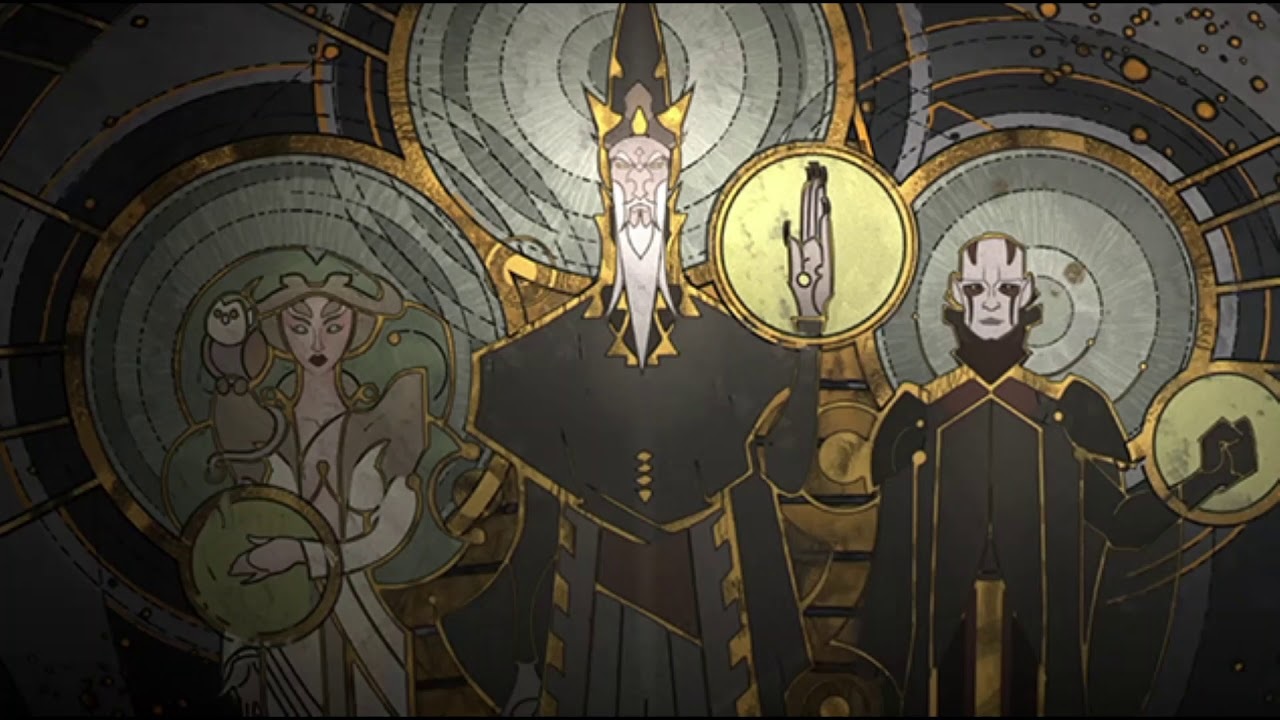 This is the Star Wars universe at its most Tolkienian. Anakin, Obi-Wan, and Ahsoka end up on a mysterious planet, very strong in the Force. They encounter three entities called Father, Son, and Daughter. Father maintained the balance between Daughter (full Light Side) and Son (full Dark Side). He wants Anakin, the Chosen One, to remain on Mortis and be the new balance between light and dark. The Son, however, senses the darkness inside Anakin and tries to recruit him to his own side to overthrow Father. It’s some Game of Thrones ish right there.

Season four has some really great episodes dealing with the Clones and specifically the growing fissure between what Clones are bred to do and what they might individually want. Those are all worth watching, but if we’re talking *essential* then we need to discuss the final four episodes. The first two deal with Asajj Ventress’ continued failure to overthrow Dooku and instead she leaves the Sith behind to rejoin the Nightsisters. The final two episodes show Savage Opress is successful in his hunt for his brother, Maul. Maul, of course, survived his bisection in The Phantom Menace and becomes an unerring hate machine, vowing to destroy the Jedi, and specifically Obi-Wan Kenobi. 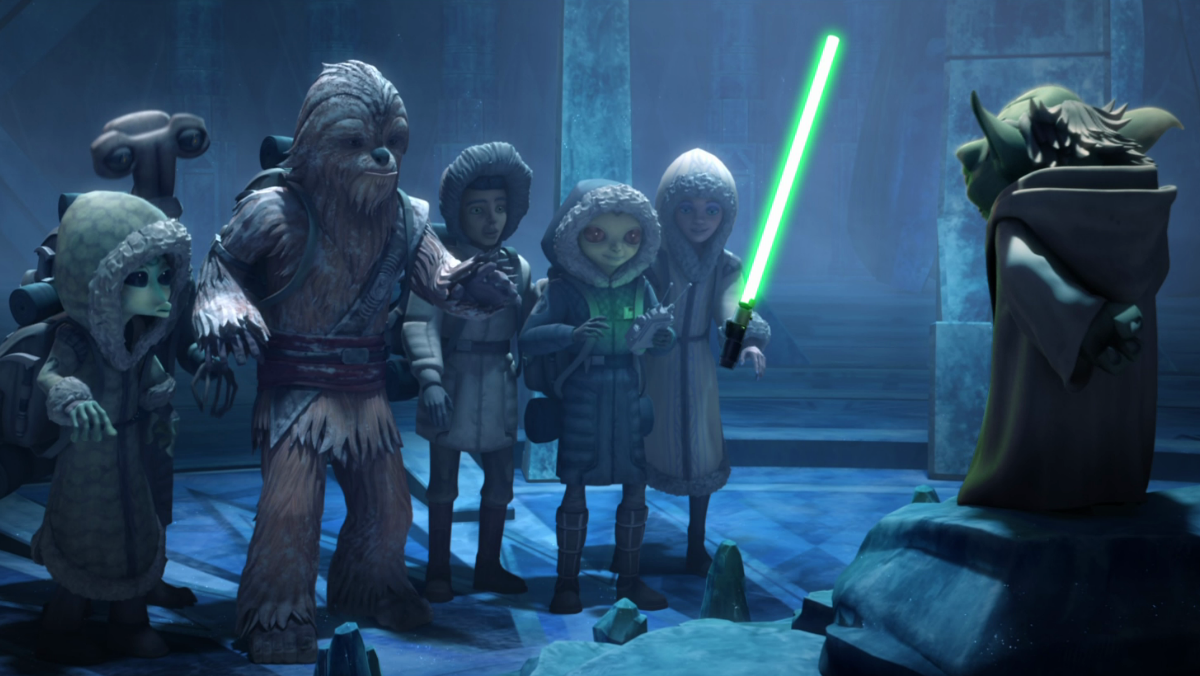 Yoda and Ahsoka take a group of younglings (children) to the Jedi Temple on Ilum. There, in the cave, they each have to face a fear or flaw in order to get the Kyber crystal that will become their lightsaber. From there, the young Jedi face a number of challenges, most involving the scoundrel Hondo Ohnaka. This isn’t the most pivotal of arcs, but it does give insight into the ways of the Jedi and ties in to the video game Jedi: Fallen Order, Rebels, Disneyland’s Galaxy’s Edge, and sequel trilogy.

This is the arc that starts to bring everything together. Not only do Maul and Savage rear their particularly ugly heads again, it ties in to the Mandalore storylines set up through the whole series. They seek to set up an alliance between Mandalore’s Death Watch and crime organizations Black Sun, Pyke Syndicate, and Hutt Cartel. This obviously sets up elements we later find in Solo but also The Mandalorian as the Darksaber becomes a major symbol of power. Obi-Wan and Satine’s story also comes to a close, while Darth Sidious decides to put down Maul and his brother’s insurrection.

This is one of the most heartbreaking arcs in the whole show. Each episode title is a reference to an Alfred Hitchcock movie and features Ahsoka under suspicion for terrorism and murder. She has to try to clear her name but soon learns the Jedi Order is too concerned with political alignments and bureaucracy to effectively come to her aid. She’s going to have to do this on her own, and not even her own master Anakin can help.

The Clone Wars ended (because it got canceled) with this four-episode journey focusing on Master Yoda and his investigation into the real cause of the Clone Wars. Who was Master Sifo-Dyas? Why did he begin cloning, and under who’s authority? And who’s really behind his death? The investigation leads to revelations about the Sith, taking Yoda to the evil order’s homeworld. 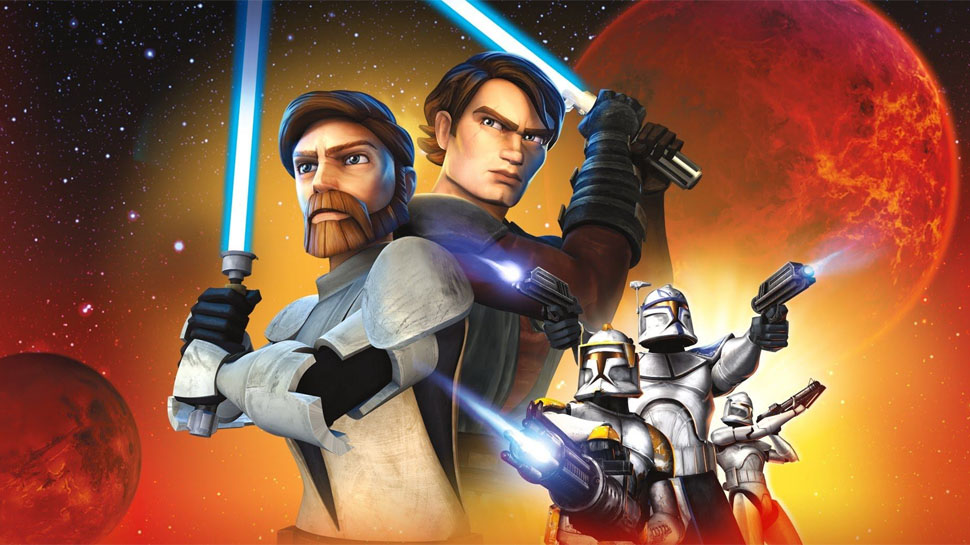 Lucasfilm
We can’t wait to see how The Clone Wars ultimately end. We know the latter part of the final season will take place concurrently with the events of Revenge of the Sith, and depict the fabled Siege of Mandalore. We’ll also get to see what happened to Ahsoka Tano and the Clones who removed their inhibitor chips and don’t execute Order 66. It’s going to be a sad, but we think rather fitting end, to a show that gave so much depth and pathos to a period of Star Wars history we thought we knew all about.