Why STAR TREK: DISCOVERY Just Did the Best Thing For The Series - Nerdist

Why STAR TREK: DISCOVERY Just Did the Best Thing For The Series

The following has MAJOR SPOILERS for Star Trek: Discovery‘s second season finale. Please boldly go onward only after you’ve seen the episode. Or if you don’t care about spoilers. Live for a while and do pretty well for yourself.

Star Trek: Discovery ended their second season this week, with a game changer of a season finale that points to an extremely exciting future for the series. Massive spoilers ahead for the season finale “Such Sweet Sorrow, Part 2.” You have been warned!

One of the biggest questions in regards to continuity in Star Trek: Discovery is just why Spock, in the original series and in several feature films, never mentions his adopted human sister, Michael Burnham (Sonequa Martin-Green). Discovery‘s season finale finally answers this question. To save the Federation from the artificial intelligence known as “Control” the Discovery crew must catapult themselves into the far future. 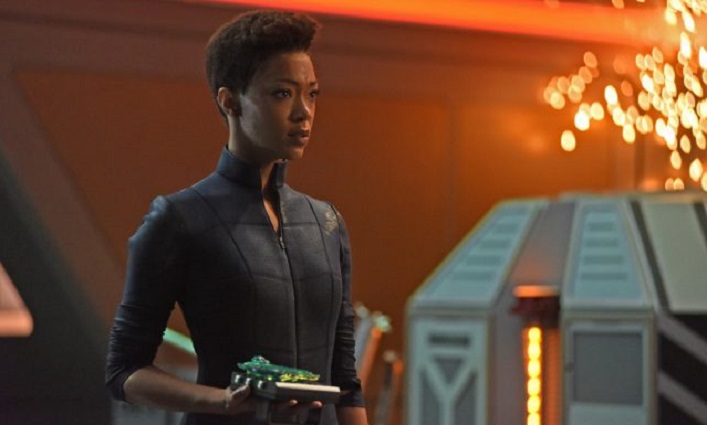 The Enterprise crew, along with Spock’s parents, Sarek and Amanda, cover up their mission, telling Starfleet that Discovery was destroyed. Starfleet then orders the classification of all official mentions of Discovery and their experimental spore drive. They are never to be spoken of in public again. But the big twist here is our titular ship has now truly gone where no one has gone before. And we couldn’t be more excited.

This single twist could be the best thing to ever happen to Star Trek: Discovery as a series. Despite strong performances from the entire cast from the get-go, the show’s status as a prequel has always been a hindrance. The technology was more advanced and different than anything we’d seen even by The Next Generation timeline, and the Klingons looked completely different as well. Season two did its best to patch some of these continuity errors, but it always felt a little sloppy. Discovery has never really properly answered this question: why was this show even a prequel at all? Well, now it won’t be. The shackles of continuity have been removed.

We don’t know exactly where the Discovery crew ends up yet and the finale leaves it vague. There’s a strong hint that they go as far as 950 years into their future. While Star Trek has gone forward as many as eighty years before, we’ve never seen a time jump as big as this one. And it opens up many story possibilities. Is there still a United Federation of Planets nearly a millennia later? If there is, does it cover the entire galaxy and not just a relatively small quadrant of space? What kind of starships would even exist that far ahead in the timeline? This blasts the proverbial shuttlepod doors wide open.

Star Trek has always thrived in allegory, and the galaxy some nine centuries into the future provides opportunities for some big ones. By this point, could the major space faring races of the franchise have mingled together into one species? Is everyone in the future a little bit human, a little bit Klingon, a wee bit Vulcan, and a dash of Cardassian? And would there be outcries of “racial purity” from certain elements within all of those cultures? It would certainly reflect the real world in ways that Discovery has not touched on much at all yet. Star Trek needs to address real world issues, and this could provide that opportunity.

This change in status quo also would allow the series’ main character, Michael Burnham, to finally take the Captain’s chair. Without 23rd century Starfleet making these decisions for them, the crew could elect to promote Michael. She did just saved the Federation, after all. This, despite her status as a mutineer in season one. After a revolving chair of captains these first two years, it’s time for Burnham to take her place as commander of the Discovery. The first two seasons of both Star Trek: The Next Generation and Deep Space Nine were very wobbly, but both truly came into their own in their third years. Could history repeat itself? With this change to the nature of the series, we are more excited than ever for Star Trek‘s future. Let’s start “boldly going.”