Spongebob Meets Keanu Reeves in SPONGE ON THE RUN Trailer

SpongeBob Squarepants has been a part of our lives for over two decades now. The show premiered on Nickelodeon on May 1, 1999. That means next spring, one of the most beloved kid’s series in history will legally be allowed to purchase alcohol. The franchise will celebrate coming of age by releasing its third movie, the entirely CGI-animated The SpongeBob Movie: Sponge on the Run. And it will do what many people do when they turn 21—head to a casino. Patrick and SpongeBob are going to Atlantic City.

But that’s not the most exciting part of the movie’s first trailer, which features our favorite yellow denizen of Bikini Bottom leaving his pineapple home behind to find Gary. That’s where they will meet one of our favorite celebrities. It’s an unlikely cameo that proves the series is still finding most excellent ways to entertain us even after twenty years: SpongeBob and Patrick will meet Keanu Reeves.

From the film’s official synopsis:

“This Memorial Day weekend, SpongeBob SquarePants, his best friend Patrick Star and the rest of the gang from Bikini Bottom hit the big screen in the first-ever all CGI SpongeBob motion picture event. After SpongeBob’s beloved pet snail Gary is snail-napped, he and Patrick embark on an epic adventure to The Lost City of Atlantic City to bring Gary home. As they navigate the delights and dangers on this perilous and hilarious rescue mission, SpongeBob and his pals prove there’s nothing stronger than the power of friendship.”

Forget burying the lede, that official movie synopsis leaves the cameo out entirely! Yes, we’re excited to see a live-action, 3D CGI-animated SpongeBob movie on the big screen. We also love the idea of him and Patrick being lured into the bright lights of Atlantic City. That’s a great premise with lots of absurd scenarios to have fun with. And we definitely love getting to watch young SpongeBob and a baby Gary start their lives together. But you have Keanu Reeves in your film playing a sage who also happens to be a talking sage bush. You have got to mention that as often as you can. Entire advertising campaigns don’t have that kind of gold to work with.

How many movies or TV shows wish they could have plastered this image on to the side of a bus? 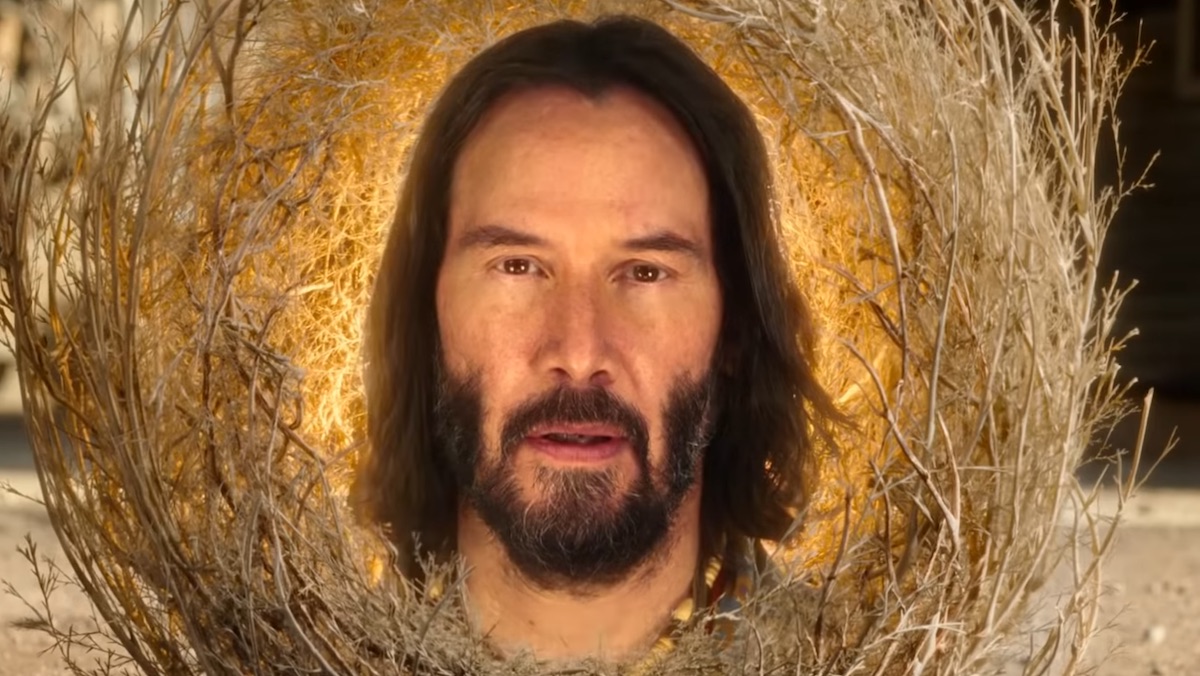 Yes, the correct answer IS all of them.

Of course, we shouldn’t ignore what else is important in this trailer. It looks absolutely great. The world and characters fully come to life in CGI. And we are 100% committed to the main story. What kind of monster would take Gary and why? We’ve been living with that adorable, meowing snail for two decades and we can’t imagine life without him. Especially now that we can sit at a blackjack table with him.

The SpongeBob Movie: Sponge on the Run comes to theaters next year, May, 2020.