The Comic Book History Of The SHAZAM! Family - Nerdist

The Comic Book History Of The SHAZAM! Family

These days, every major superhero has a virtual army of spin-off characters. Superman, Batman, Spider-Man, even Green Lantern went from one guy to a whole Green Lantern Corps. But the superhero who started this entire trend decades ago is none other than Billy Batson, the original Captain Marvel  better known today as Shazam.

When Captain Marvel debuted in 1940, Superman and Batman were already around and extremely popular, and although Batman had Robin by his side, he was more of a true sidekick who partnered with the Caped Crusader, and less of a “spin-off” character. Fawcett Publications’ Captain Marvel created perhaps the first successful spin-off hero with Captain Marvel, Jr. in 1941 and the trend started in earnest. Captain Marvel, Jr. quickly received his own popular title, one which sold millions and inspired a certain future King of Rock n’ Roll. 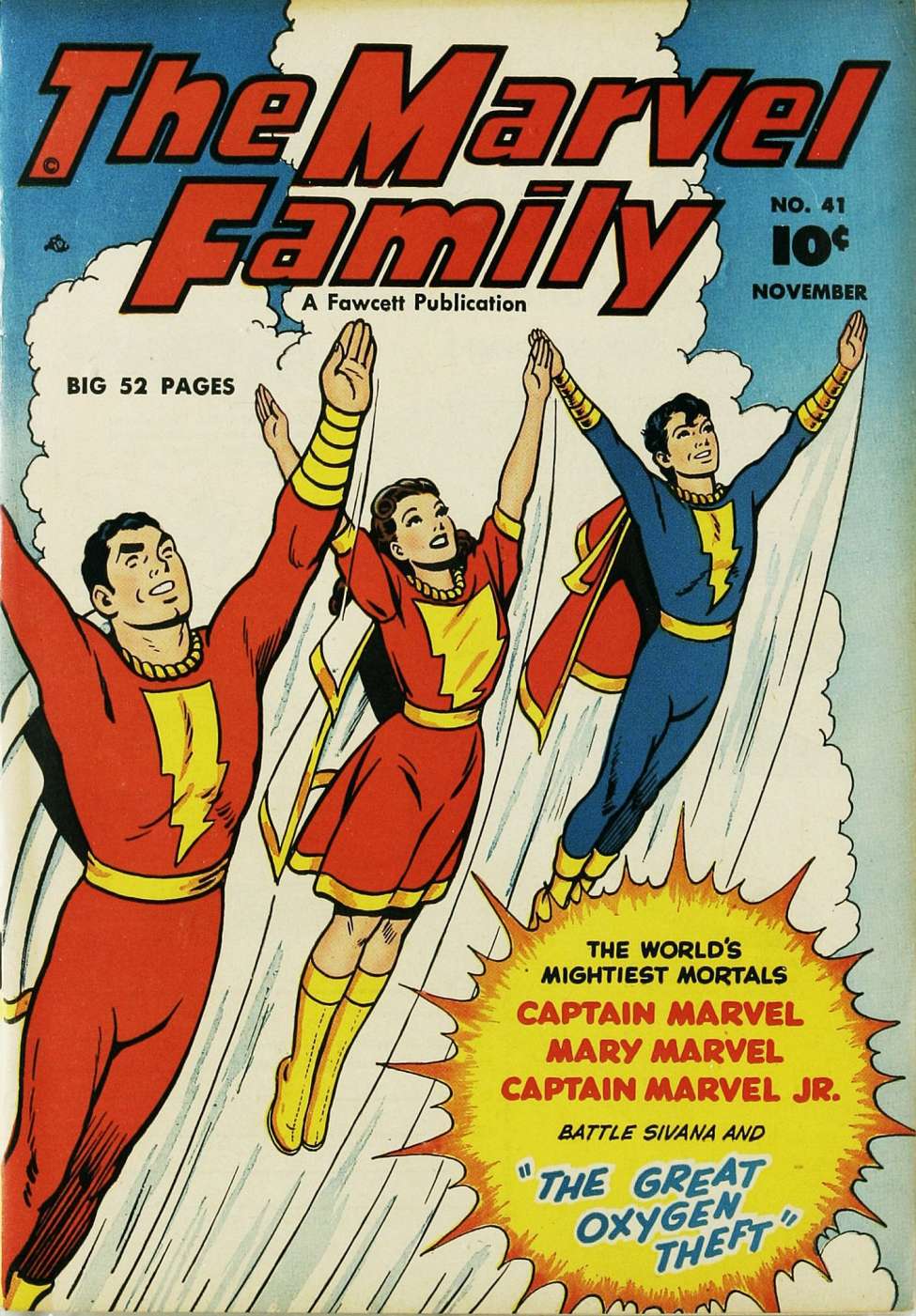 A year after Captain Marvel Jr. debuted, we got Mary Marvel, Billy Batson’s twin sister, visually based on Judy Garland. She also quickly received her own title. Eventually, the newly dubbed “Marvel Family” received their own ongoing title in addition to their separate solo books. Captain Marvel was doing superhero franchising before it was glimmer in the eyes of any other publisher.

Over the course of the next decade, fans got the “Lieutenant Marvels.” They were three other young boys, who also happened to be named Billy Batson, who could access the power of Shazam if they said the word in unison. These three went by the nicknames of “Tall Billy”, “Fat Billy”, and “Hill Billy,” because the last one was from Appalachia. Apparently nothing was too offensive in 1947.

The Marvel Family also had a non super-powered member in their ranks–an old man they nicknamed Uncle Dudley, who wore a homemade costume. There was even Hoppy the Marvel Bunny, who was a cartoon rabbit in the Bugs Bunny tradition who happened to have Captain Marvel’s powers and costume.

But in 1953, after DC Comics sued Fawcett to cease their Captain Marvel books, the Marvels went away for two decades. Meanwhile, DC and the newly established Marvel Comics began adopting the “family” approach to their own heroes.

In 1973, the classic Marvel Family returned, ironically now owned by DC Comics, in a series given the name Shazam!. They couldn’t call a title Captain Marvel due to their chief rival Marvel Comics’s trademark on said title. Only Captain Marvel, Marvel Jr., and Mary Marvel made the cut. The Lieutenant Marvels basically vanished, save the odd cameo here and there. 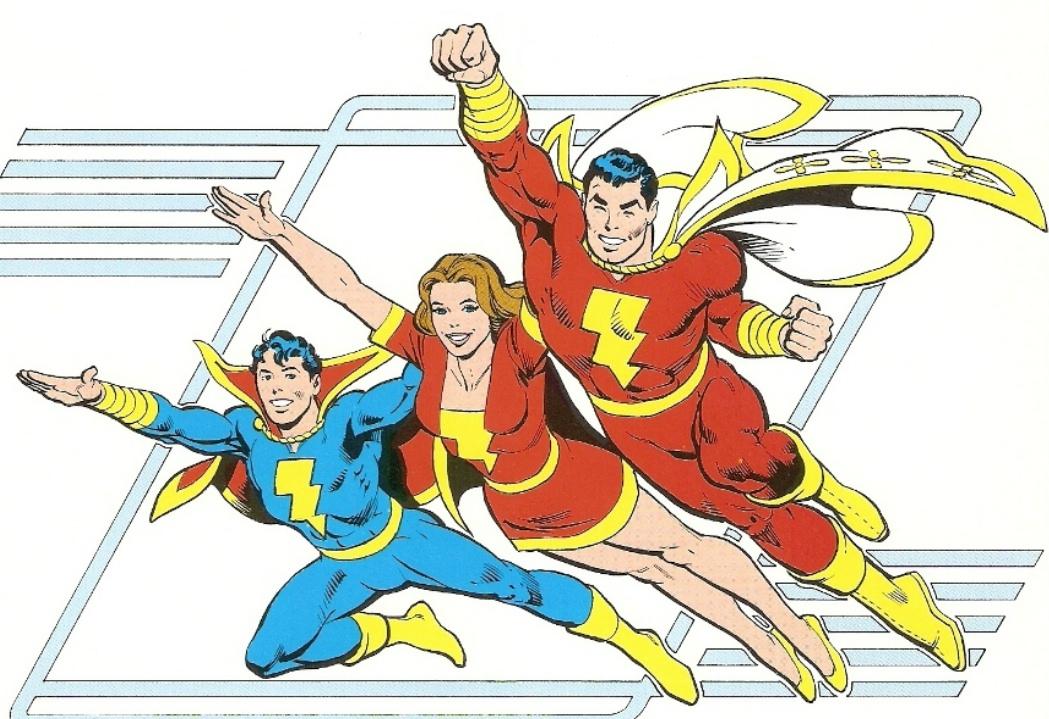 Then, DC hit the reset button in 1985 with their mini-series Crisis on Infinite Earths. ALL the Marvel Family went away, leaving us only with the original Big Red Cheese, Billy Batson. Similarly, DC felt compelled to get rid of Supergirl, Superboy, and other famous spin-off characters at the same time. Spin-off characters were just not cool in the grim n’ gritty ’80s.

But in 1995, creator Jerry Ordway decided to expand the Marvel Family once more in the pages of The Power of Shazam! comics. He introduced updated versions of Captain Marvel Jr. and Mary Marvel who remained pretty darn close to their 1940s counterparts. Wisely, DC decided not to go overboard this time; the modern era didn’t give us a “Hillbilly Marvel,” thank goodness. For a long time, the Marvel Family kept things to just three. 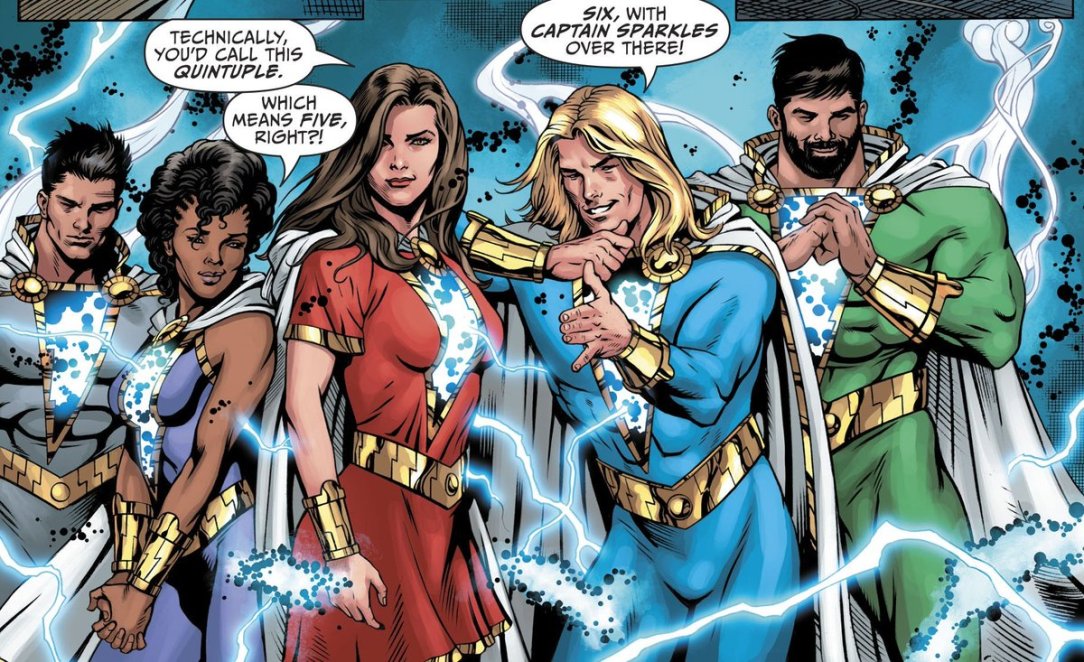 But that changed in 2012, when writer Geoff Johns gave fans his own Marvel Family, now simply the Shazam Family. Freddy and Mary returned, joined by Billy’s adopted siblings Darla Dudley, Pedro Pena, and Eugene Choi. The Shazam family truly diverse for the first time. This newest version of the Shazam heroes is probably the best one yet. It retains the elements that made it special in the first place, while expanding it to reflect modern society. We hope this version  sticks around for the long haul.