by Kyle Anderson
If you’d have told me in 2012 following the end of Christopher Nolan’s Dark Knight trilogy that movies starring Wonder Woman and Aquaman would do better at the box office than movies about Superman and Batman, I’d have thought you were crazy. But we live in a world where thinking outside the box for DC Comics movies seems to work better than the tried-and-true. On the heels of the gargantuan success of Aquaman, the DCEU’s latest offering, the smaller-budgeted Shazam!, is its first real attempt at a superhero comedy…and holy moly does it work! Shazam!—based on the Fawcett Comics character picked up by DC back in the day, and originally called Captain Marvel (yes, really)—is one of the weirder comic book ideas to get turned into a modern movie. A kid says a magic word, one bestowed on him by a literal wizard, and he turns into an adult superhero. It’s absurd, and to Shazam!‘s complete credit, it embraces the absurdity and tells you it knows it too, while at the same time offering a surprisingly heartfelt story of family and belonging and living up to your best.

In Philadelphia, a young foster care runaway named Billy Batson (Asher Angel) is placed in the care of new foster parents who run a house full of young people, including the ostracized differently abled Freddy Freeman (Jack Dylan Grazer, the film’s MVP). Though Billy has no interest in his new surrogate family, and finds Freddy’s superhero fascination kind of annoying, he eventually saves Freddy from some bullies and in the ensuing chase is zapped into a magical cave by a Wizard (Djimon Hounsou) who says Billy is pure of heart and bestows upon him the powers of the champion, accessible when Billy says the word “Shazam!”

If you’ve seen the trailer, you know Billy’s superhero form is played by Zachary Levi. The movie not only is aware of the comparisons one might make to the Tom Hanks classic Big, it even directly draws attention to it. Levi’s childlike demeanor coupled with his overall giantness work together very nicely, and the interplay between Levi and Grazer is easily the highlight of the movie. A lot of screentime is devoted to the pair trying to figure out what new powers Billy possesses and it’s a joy.

Of course, any superhero movie worth its tights needs a villain, and Shazam! has Dr. Sivana, played by Mark Strong at his Mark Strongest. Sivana has been obsessed with the Wizard and the powers he can bestow for years; he becomes the vessel for the Wizard’s nemeses, the seven deadly sins, personified by giant, frothing beasts of differing shapes and kinds. It’s through Sivana and the sins that director David F. Sandberg is able to show off his horror movie roots. I was shocked and kind of delighted that a movie like this could be so scary—not in a way that would prohibit kids from enjoying, but in a throwback to the ’80s and ’90s kids movies that were all terrifying but that we were perfectly suited to handle. Who wouldn’t want to see superheroes fighting monsters?

The trailers for Shazam! have all showcased the film’s humor, and that is certainly the film’s biggest draw and very best piece. But what they don’t show is the heart and the emphasis on togetherness and family, something I wasn’t expecting. While the jokes are made at the expense of Billy and of superheroes, it never makes light of Billy’s lonely, troubled childhood nor his desire to find his people. You might expect to get bored any time Billy is in Billy mode, but you don’t, and that is a huge bonus. 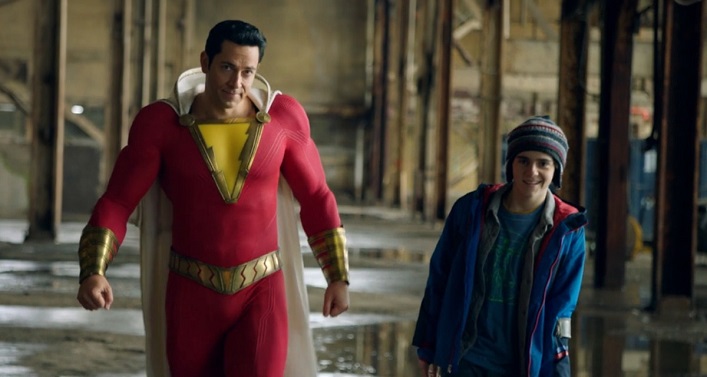 Shazam! is not your typical superhero movie and it’s certainly not your typical DC movie, and that’s a very good thing. The more atypical DC goes, the more people seem to like them. It’s not without some overused superhero origin movie moments, but Shazam! is one of the most fun times at the movies you can have. It feels like it belongs to a different era of superhero movie, in the best possible way. You’ll laugh, you’ll jump, you’ll feel good, and you’ll go out into the sun singing a very specific version of Survivor’s “Eye of the Tiger.” And I can’t wait for the next one.