The History of SHAZAM and SUPERMAN's 80-Year-Old Feud - Nerdist

The History of SHAZAM and SUPERMAN’s 80-Year-Old Feud

by Eric Diaz
Batman V Superman may have gotten a movie, but the true grudge match in the DC Universe is between the Man of Steel and DC’s upcoming movie star Shazam!

Shazam and Superman have a long and contentious history, despite both being characters published by DC Comics. Of course, Shazam didn’t start out a DC hero. In fact, DC Comics was so incensed at the success of the original Captain Marvel—Shazam’s original form—they had Captain Marvel’s original publisher Fawcett Comics tied up in legal battles for years.

The “Big Red Cheese” Vs. “The Big Blue Boy Scout” 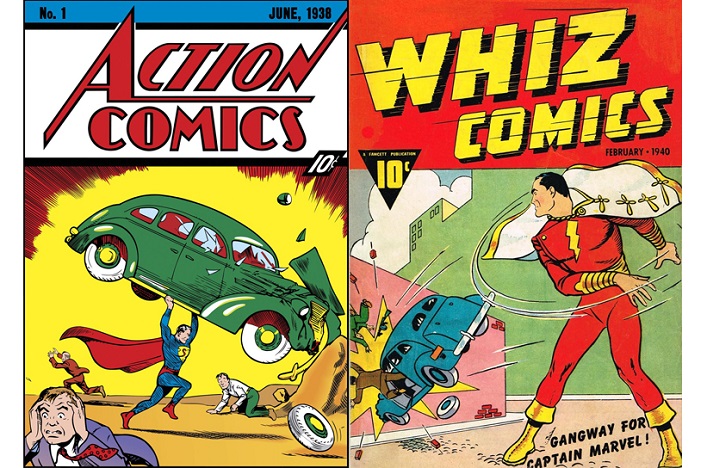 When Superman debuted in 1938, he was an instant sensation, a pop culture icon almost from the get-go. Within two years of his debut, he had a radio show, a newspaper strip, an animated movie serial, and float in the Macy’s Thanksgiving Day parade. And he was selling millions of comics. Superman inspired an entire genre, and many, many imitators from rival publishers.

But one imitator stood about the rest. Debuting in 1940, publisher Fawcett Comics wanted to get in on the superhero craze that Superman began, and they created their own Superman-like hero, named Captain Marvel. He looked more than a little bit like Superman, and his first appearance cover had him tossing a car, just as Superman did on the cover of Action Comics #1. And he too was an instant hit.

Unlike Superman, however, Captain Marvel wasn’t an alien, but was actually a young boy named Billy Batson who became an adult hero whenever he yelled out the magic worlds “SHAZAM!” By the mid 1940s, he had half a dozen spin-off comics and a live-action serial, and he was outselling the Man of Steel. And DC was not having it. In 1941, DC Comics filed suit against for Fawcett, claiming Captain Marvel was a blatant rip-off and in violation of copyright laws. The litigation lasted 12 long years, and by 1953, the judge finally ruled in DC’s favor. So Fawcett had to cancel all their Captain Marvel comics, leaving Superman and DC Comics the apparent victors.

Superman Beats Shazam… and Then Becomes Him

But here’s the funny thing—Superman was always just as inspired by Captain Marvel as the other way around. When Superman debuted, he fought crooks and gangsters. Captain Marvel, on the other hand, was far more whimsical and kid-friendly, and fought crazy super-villains and had adventures in space. Younger readers responded to his imaginative world by buying more Captain Marvel comics than Superman ones. Eventually, Supes followed suit.

And those weren’t the only examples of Superman lifting from Captain Marvel; his once red-headed arch nemesis Lex Luthor also became a bald scientist, just like Captain Marvel’s chief baddie, Dr. Sivana. Unlike early Superman, Captain Marvel could actually fly and not just “leap tall buildings,” and run at super speed. Soon enough, Superman could fly and run super fast too. Captain Marvel even had a teenage version of himself in Captain Marvel Jr, so DC debuted Superboy. There might not have been a Captain Marvel without Superman, but Superman’s continued success owed a great deal to the good Captain. 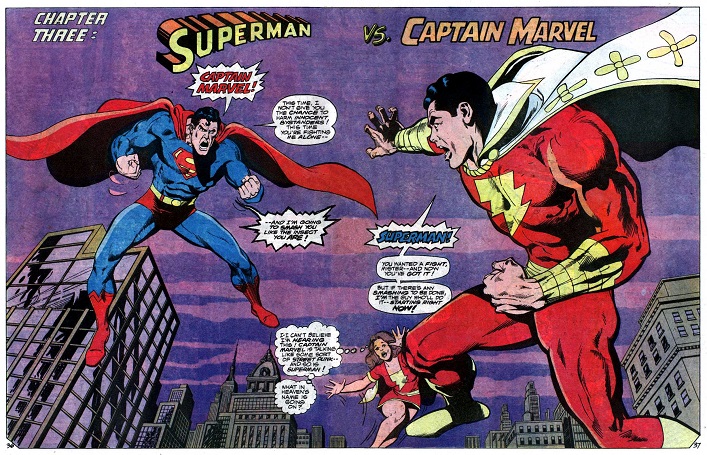 By 1973, it had been 20 years since Fawcett had published any Captain Marvel comics. In an ironic twist, since they couldn’t publish them anymore by law, they licensed the rights to DC Comics, the company that once sued them for making the character in the first place. DC could not call the comic Captain Marvel (this due to Marvel Comics, who had their own character called Captain Marvel… but that’s a whole other story) so all comics featuring the character were now titled Shazam!, which made readers believe the characters name was Shazam. The actual name change wouldn’t occur for 30 more years. 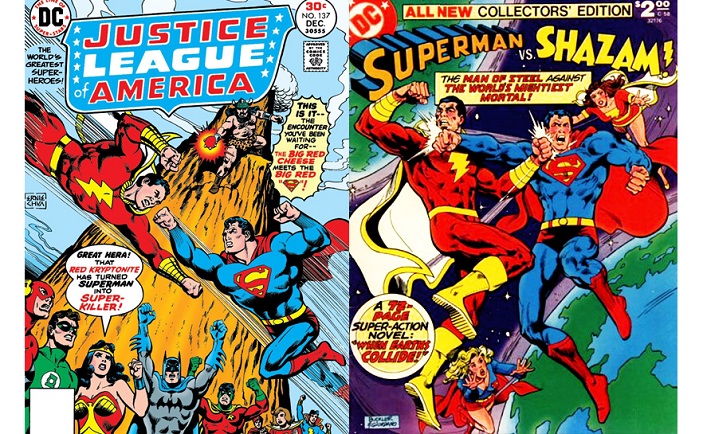 DC began publishing Shazam! in 1974, and that same year, a live-action show debuted on Saturday mornings. Even though he was living on his own parallel Earth, he was part of the greater DC Multiverse at this point, and could officially cross over with the character who was once his greatest rival. The cover of the very first story in which they officially met, an issue of Justice League of America, featured the two heroes about to duke it out, although that didn’t actually happen in the comic itself. 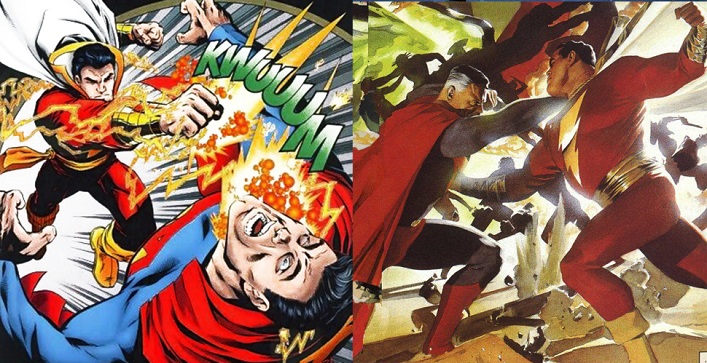 The actual “Big Fight” took place in a special Superman vs. Shazam special edition comic. And for the next 20 or so years, whenever Captain Marvel and Superman shared a comic book—whether it was JLA or Kingdom Come—the writers almost always had the pair fight. The years-long behind-the-scenes feud just couldn’t help but spill out into the comics themselves, and the meta commentary of these two longstanding rivals was something creators just couldn’t resist. The characters were now “co-workers,” but their bitter history lingered.

These days, Shazam is comfortably part of the DC Universe, and few fans even know he was ever published anywhere else. The animated Justice League: War made him a founding member of the League, and if we ever see the Justice League on the big screen again, there a good chance Shazam will be a part of it. Inevitably, Shazam and Superman will share the screen together in live-action, it’s just a matter of when. But if these two classic do-gooders do knock each other around a bit, it’ll be because they have some unresolved issues going back 80 years.