ROBOTECH Might Be the Most Unlikely Hit in History - Nerdist

ROBOTECH Might Be the Most Unlikely Hit in History

It’s one of the best and easiest times to be an English-speaking anime fan. Between the now-merged Funimation and Crunchy Roll, you can pretty much find any and all animation from Japan you could want. Dubs or subs, you’ve got access to a whole plethora. Didn’t used to be the case, of course. Until fairly recently, if you came across anime in North America, it was recut, redubbed, and often entirely rewritten versions. Speed Racer was the Americanized version of Mach Go Go Go; Space Battleship Yamato became Star Blazers, stuff like that. However the most popular of these would arguably be Robotech, an animated series culled from a whopping three totally separate original anime series. The entire show is available now on Blu-ray from Funimation, and it’s a fascinating ride.

Robotech is a franchise from Harmony Gold, a burgeoning TV and film production company. One of its original remits was to import foreign entertainment to the United States. The company hired Carl Macek to adapt Japanese animated series. His choice was the 1982 series Super Dimension Fortress Macross, a show featuring a love triangle set against humans fighting against alien invaders with the help of jet fighters that turn into halfway mechs.

Unfortunately for Macek, Macross only had 36 episodes, far fewer than the 65 minimum needed for syndication. He would have to supplement it with two other series: 1984’s Super Dimension Cavalry Southern Cross, and 1983’s Genesis Climber MOSPEADA. Those shows have 23 and 25 episodes, respectively. With all of these together, plus some judicious reconfiguring, you get 85 episodes of Robotech. The problem is, of course, these three series are effectively unrelated. While Southern Cross was also in the Super Dimension metaseries (the third to Macross‘ first entry), MOSPEADA was not part of anything. 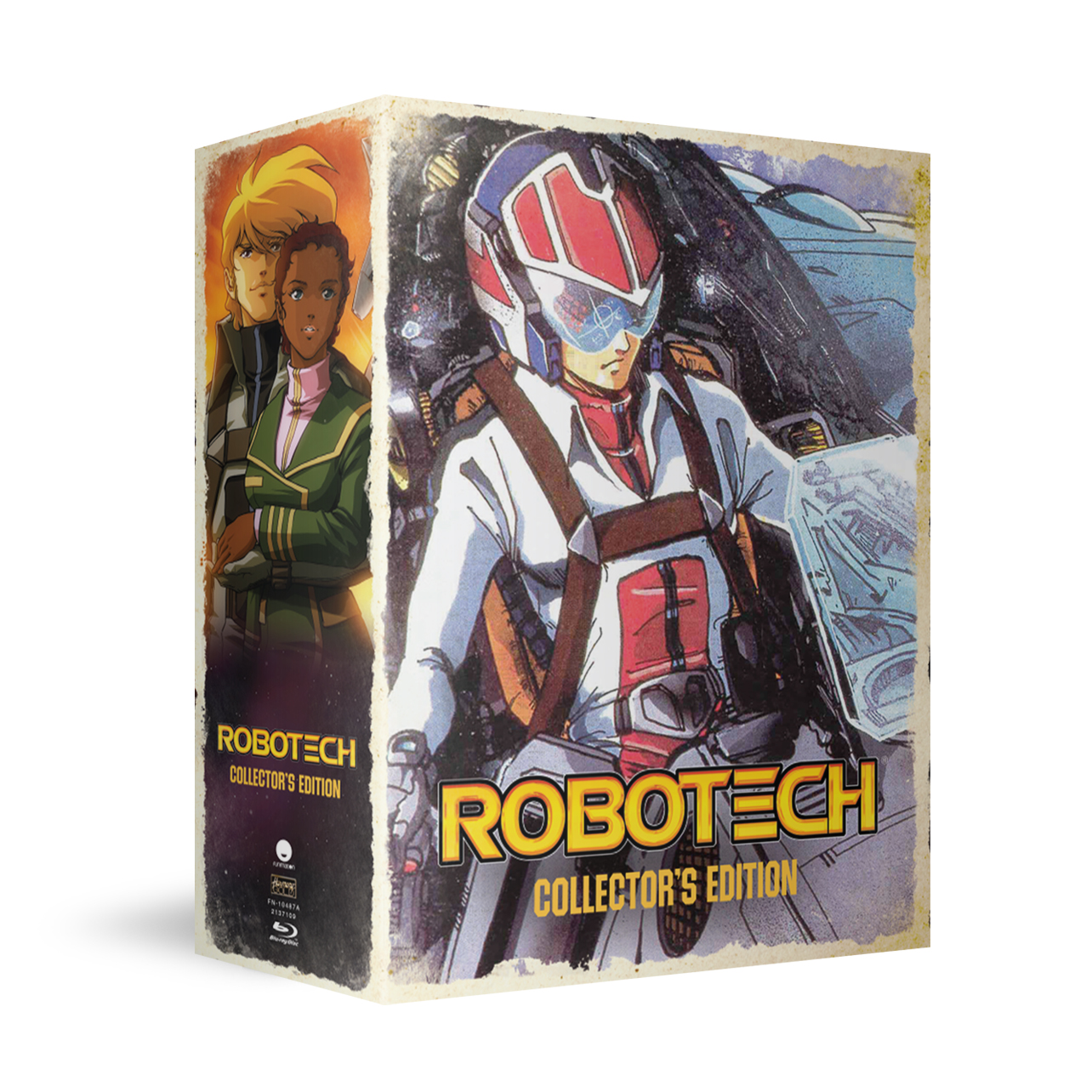 The decision then became, how would these three similar yet disparate shows become one? This necessitated splitting the story of Robotech into three different sagas. Each saga takes place at a different time in Earth’s future history and concerns each of the three Robotech Wars. In order to tie all three together despite different characters and types of robotic mecha, the writers decided that each war would be for the powerful energy source “Protoculture.”

Part one, “The Macross Saga,” concerns humanity’s discovery of a crashed alien ship and subsequent battle against a race of giant warriors called the Zentraedi. We meet a young pilot named Rick Hunter as he first gets in the cockpit of a strange transforming jet fighter. He soon rescues a young singer named Lynn Minmei and as the fight to save humanity takes off, we get a lot of interpersonal drama between the people as they fight the Zentraedi. The would-be romance between Rick and Minmei hits a snag when Rick meets First Officer Lisa Hayes.

Earth nearly succumbs to the Zentraedi, but as you might expect, the good guys win. In the process, they learn about protoculture and the so-called Robotech Masters. This leads directly into part two of the series, “The Masters Saga,” set 15 years later. Here we see the arrival in Earth orbit of the Robotech Masters, who have come seeking what turns out to be the sole means in the universe of producing protoculture. After some poor diplomacy, the Masters spark a war with humanity. Among the Army of the Southern Cross are 2nd Lts. Dana Sterling and Bowie Grant, who pilot this portion of the story’s signature mechs. 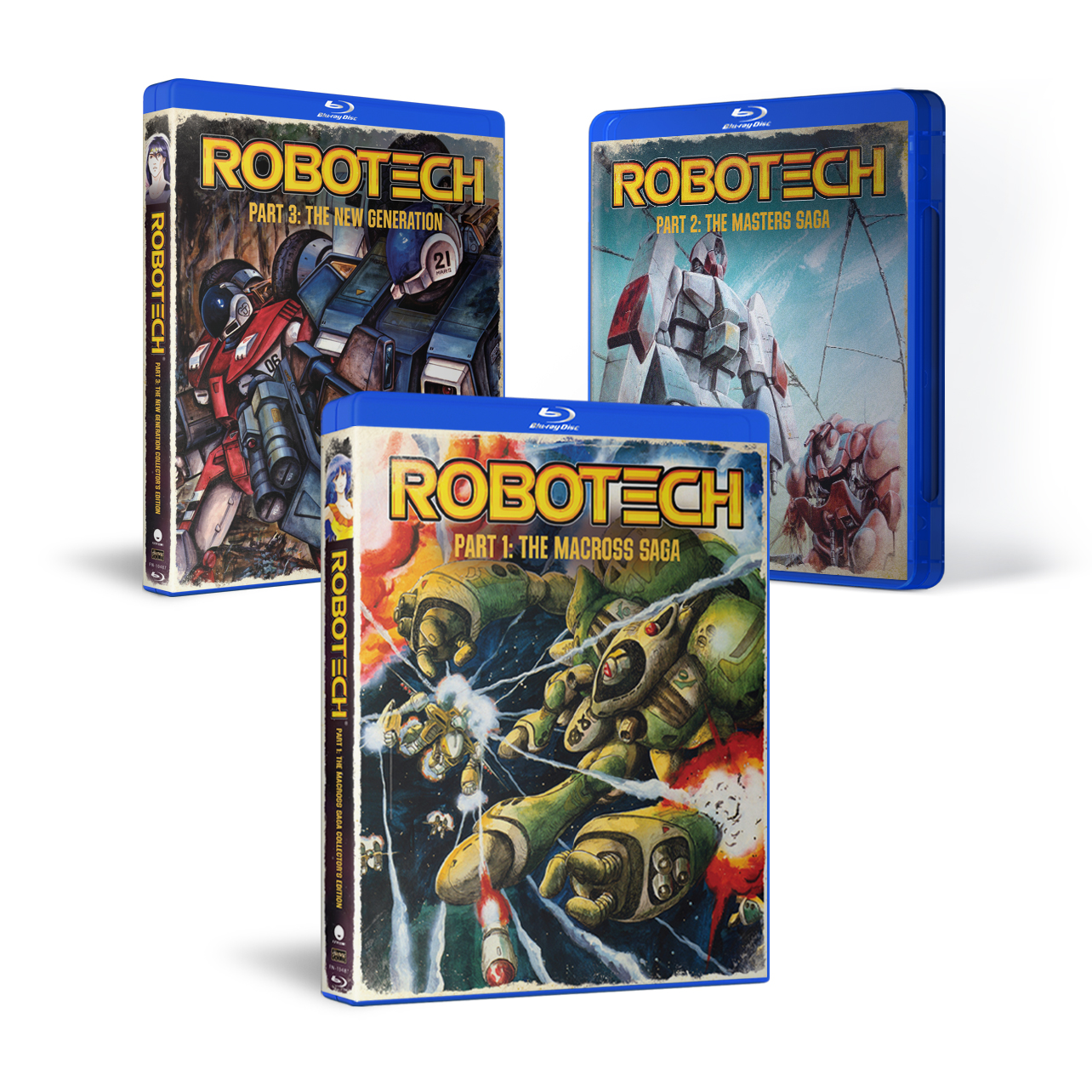 At the end of the Second Robotech War, Earth is covered in the spores of a plant called the Flower of Life. This flower, turns out, is the source of protoculture and a beacon to the mysterious Invid who scour the galaxy for its presence. The Invid eventually land on Earth 12 years later for the final Robotech War. “The New Generation Saga” finds the Invid totally in control of Earth.

This section feels the least connected to the previous two. However, fairly ingeniously, the first two sections have little references that set up how this one starts. We learn many of the heroes of the First Robotech War had left Earth to seek out the Robotech Masters on a preemptive mission. This Robotech Expeditionary Force sends missions back from across the galaxy to attempt a liberation of their homeworld. The storyline follows one group of freedom fighters as they work their way towards the final battle with the Invid. 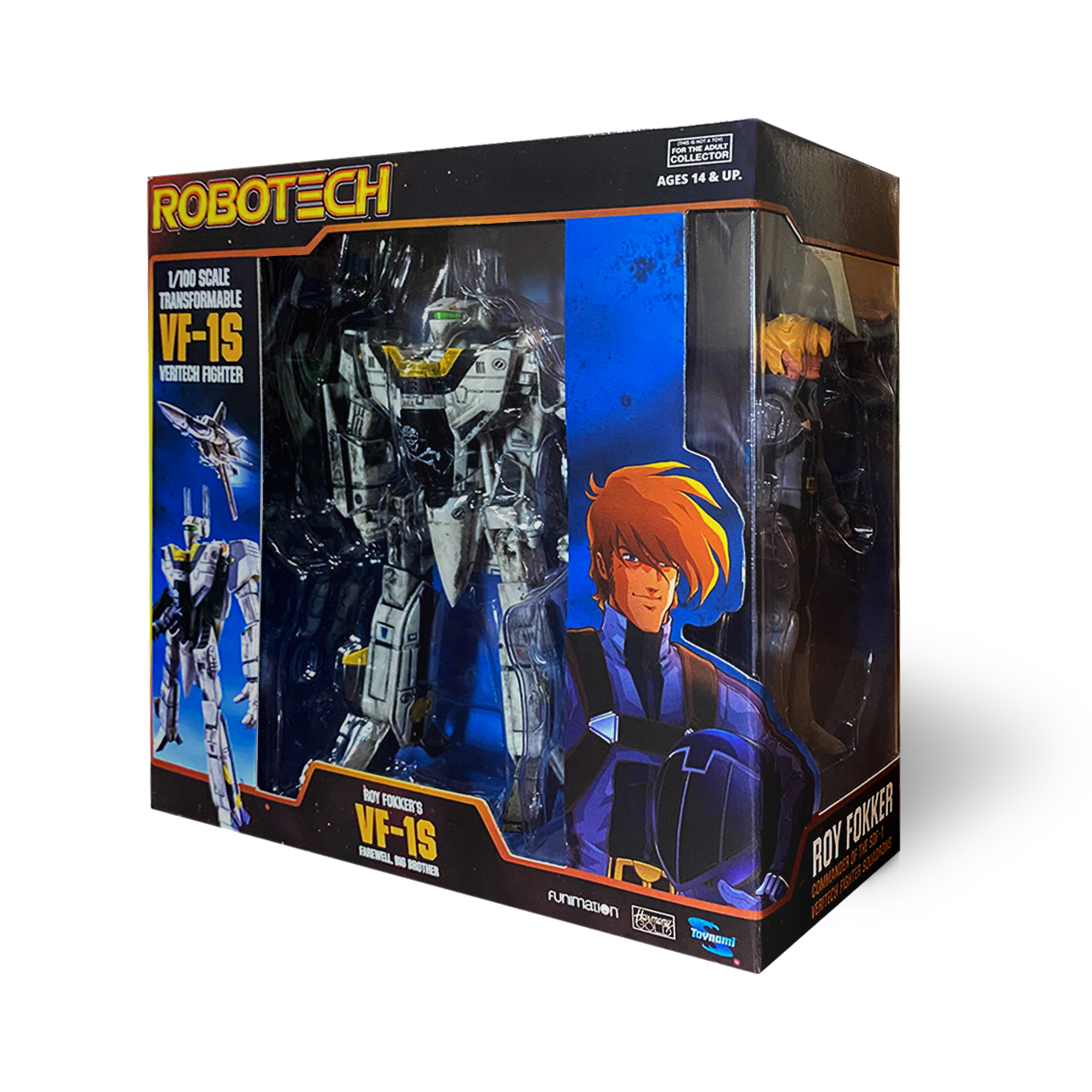 Obviously, with three separate TV shows all rolled together, Robotech feels a bit disjointed if you watch it all in succession. For most people, “The Macross Saga” is the one to watch. It’s the one that’s the most, to them, Robotech. Indicative of this is how Rick Hunter in his flight gear and his jet fighter are still the images most often associated with it. You can tell Macek cared the most about bringing Macross to television even when you watch it 36 years later.

That said, I think the second and third sections have some great characters. Dana and Bowie in “The Masters Saga” are a great one-two, and the mech design is my favorite of the bunch. “The New Generation Saga” has Scott Bernard as its hero and he’s just an overall badass, plus the transforming motorcycle mechs are likewise pretty dope.

Robotech has made its way to home media several times over the years, in various formats. In 2019, FUNimation got the rights, and it’s through them that we have this absolutely gorgeous collector’s edition set. In addition to all 85 episodes, conveniently split up into their respective sagas, you also get four embroidered patches, and a 1/100 scale transformable VF-1S Veritech Fighter, as piloted by Roy Fokker in “The Macross Saga.” It even comes with a Roy Fokker figure, though not small enough to fit in the cockpit. 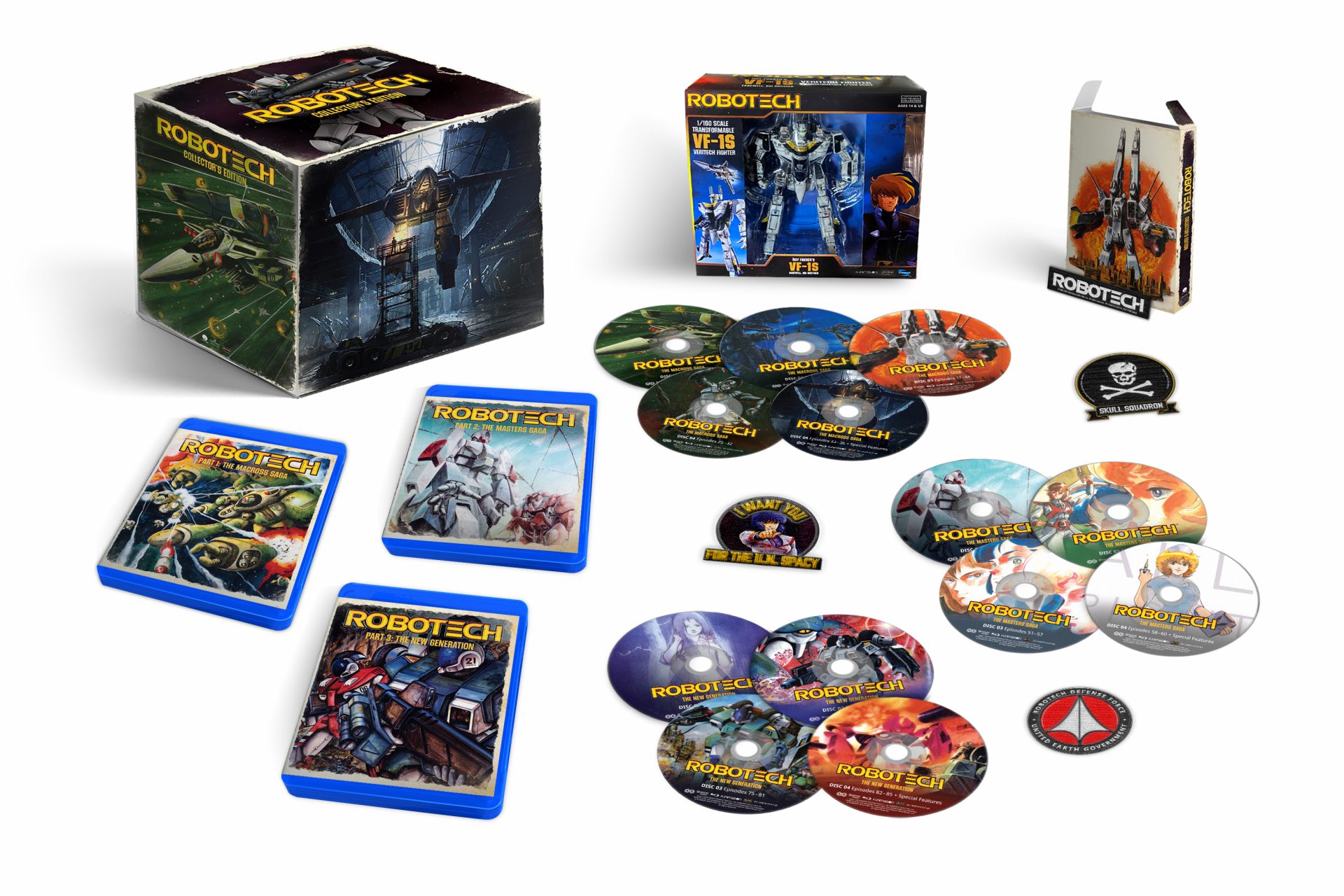 The series looks and sounds gorgeous on Blu-ray, and really lets you experience Robotech in the best possible way. I only saw a few episodes in my youth, so watching it now feels like a brand new experience. Even if you’re iffy on dubbed anime, it’s a fascinating piece of animation history, when a company felt like bringing grown up animation to a different country and market it directly to kids. And by gum, it works.