Why SPEED RACER Deserves to Be Remembered - Nerdist

Why SPEED RACER Deserves to Be Remembered

by Kyle Anderson
Anime is fairly ubiquitous in North America these days; Netflix is even commissioning original animation from Japan and Korea, and even though there still tends to be a bit of a stigma surrounding anime when you’re talking to the average viewer, people at least know what it is. Back in the ’60s, though, “anime” wasn’t a term anyone had used yet, and Japanese cartoons had to be heavily dubbed and re-edited for American consumption. Astro Boyand Gigantor were black-and-white series that made the transition in the early-60s, but neither of them could match the full-color masterpiece that was Speed Racer, still great 50 years later.

Speed Racer began life as a manga series called Mach GoGoGo by Tatsuo Yoshida in 1966. Almost immediately, the syndication rights to Mach GoGoGo were acquired by Trans-Lux, and Speed Racer premiered on American television in the fall of 1967. Much of the violence was toned down from the Japanese version, and the stories were re-written and voice-directed by Peter Fernandez, who provided the voices for Speed Racer himself and the mysterious Racer X as well as rearranging and writing English lyrics to Nobuyoshi Koshibe’s iconic theme song. Speed Racerran for 52 episodes between 1967 and 1968 and was a major hit.

It also very quickly became the go-to joke for people who didn’t like or understand anime; since it was a low budget production, some shots were reused ad nauseum and some of the dubbing was hilariously fast to fit the speed of the Japanese lines. Like Godzilla movies for live-action, these tactics used to make the series palatable for English-speaking audiences became the very thing people made fun of them about. Would the show stand up after such a long time? I’d certainly watched my fair share of Speed Racer when it was shown on the fledgling Cartoon Network between 1996 and 2001, but would I enjoy a rewatch? Turns out, yes I did.

The series follows a young racer (Go Mifune in the original Japanese version, Speed Racer in the English) as he attempts to become the world’s greatest car racer, using an experimental car called the Mach 5 designed by his father, Pops Racer. He is aided by his girlfriend, Trixie, while his younger brother, Spritle, and Spritle’s chimpanzee friend, Chim-Chim, cause trouble in slapstick adventures of their own. Each adventure had Speed in a race while various criminals, low-life, and rivals try to stop him from winning. His biggest competition is the mysterious and almost superheroic Racer X, who (spoilers) is Speed’s long-lost older brother.

Speed Racer has recently gotten a gorgeous Blu-ray transfer from Funimation, who also included all of the Mach GoGoGo episodes to compare and contrast. Watching the series looking and sounding better than it ever has certainly heightened its strengths: its frenetic action and detailed car designs make for constantly entertaining episodes. Since Tatsunoko Production didn’t have the highest budgets, they couldn’t show the kind of fluid motion Warner Bros or Disney films could, but it aimed to be much more dynamic than the flat left-to-right movement of Hanna-Barbera. We focus a lot more on the characters’ faces and the closeness of the cars as the background moves speedily behind them.

You might think a show about Grand Prix car racing couldn’t possibly be enthralling week to week, but you’d be wrong; Speed Racer always managed to keep the excitement at a high with its inventive new villains and threats (Episodes seven and eight feature “the Mammoth Car,” a behemoth the size of a train that tries to take out Speed) and constant danger. There was always some crime or mystery for the Racer clan to face. Even the races themselves remained exciting. If a competitor crashed, it would almost always be accompanied by a massive explosion and then you’d never see them again. They straight-up died.

I’ll probably never fully enjoy the shrieking of Spritle and his ridiculous exploits with Chim-Chim, but the beauty of the show is that the series is never about them too much. In this way, Speed Racer set the trend for a number of anime series that followed, where even the most intense action-adventure series could have extremely over-the-top comedic elements that heighten the cartoon aspect of it all. I think of something like Outlaw Star, which by all accounts was a space adventure for older kids and grown ups but still included absurd cartoony bits.

Speed Racer proved to be incredibly influential to animation. Japanese action series such as Gatchaman and Battle for the Planets made their way to the U.S. in the 1970s, and the ’80s exploded in terms of access to English-dubbed Japanese series. In addition, many people working in American animation today cite Speed Racer as a major influence, most notably The Fairly OddParents and Danny Phantom creator Butch Hartman; he’s put Speed Racer references in everything he’s ever done.

Watching it now, 50 years on, Speed Racer has a glorious mix of cutting-edge and dated. The animation is at once quaint and magnetic, and watching these episodes, even though I wasn’t a kid in the 1960s, I’m filled with a kind of nostalgia, like I’m wrapped in a warm hug of action. This has the same effect on me as stuff like Thunderbirds and Jonny Quest. There’s an effect a Speed Racer episode has on the viewer that just can’t be replicated. It’s a kind of special no time can erase. 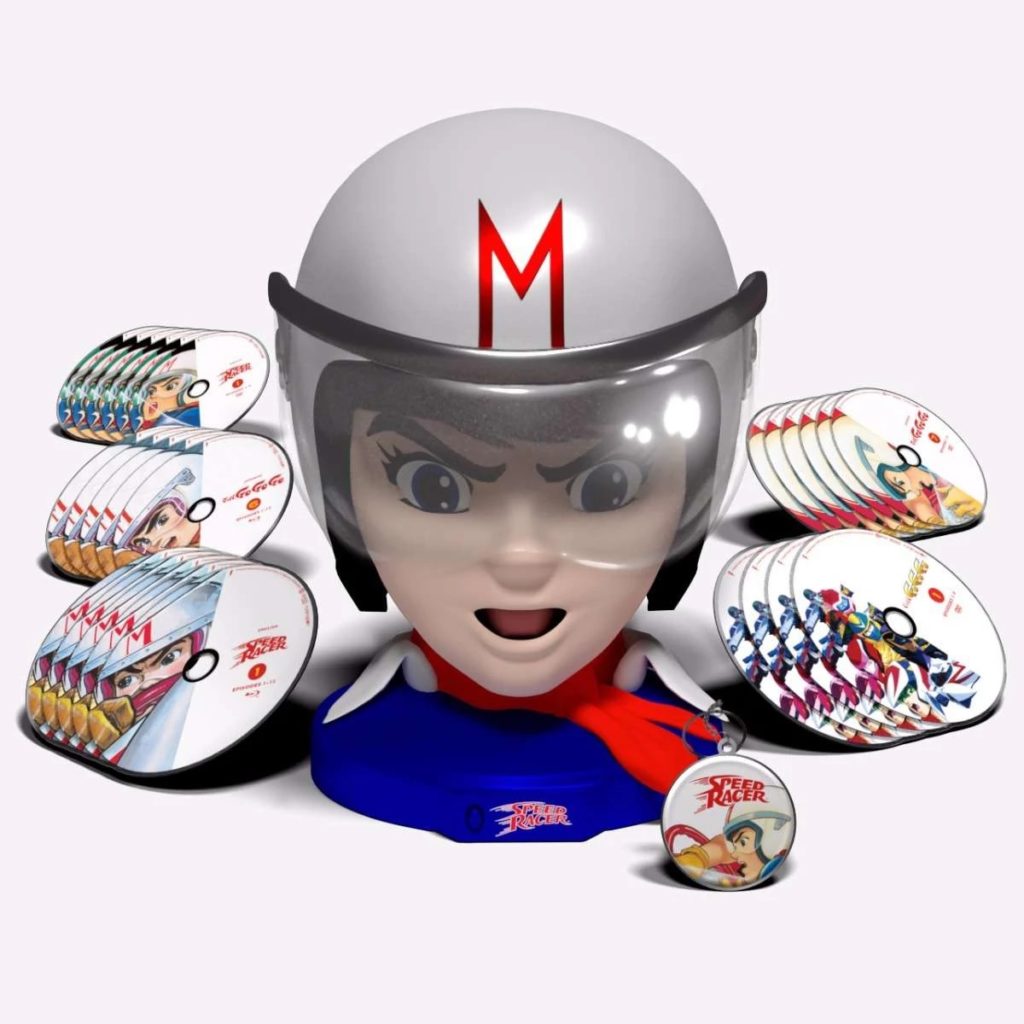 Speed Racer: The Complete Series Mega Set is available now from Funimation, in this decorative and terrifying Speed head.

Share your favorite Speed Racer episode in the comments below!