Star Wars is rich with action, adventure, family, and romance. From Han and Leia’s princess/scoundrel dynamic to Anakin and Padmé’s tragic fate to the overload of cuteness that is FinnPoe, there’s a ship for everyone in a galaxy far, far away. Perhaps the most controversial? Reylo. Rey is a powerful, intelligent, resourceful, kind Jedi and Kylo Ren is a murderer and the brutal, unstable leader of the First Order. Some may argue that Kylo Ren/Ben Solo is undeserving of love. But what can I say, opposites attract AND there is inherent appeal to forbidden love. Let’s run down Kylo and Rey’s best moments so far!

Kylo and Rey speak through the Force multiple times during The Last Jedi, and each time I couldn’t believe with my own eyes what I was seeing. An intimate bond that crosses space and time to connect? Ample fodder for a powerful ship. But the last time Kylo and Rey lock eyes is at the end of the film, after the Battle of Crait, and after Luke’s death. Rey stares at Kylo, who is literally kneeling before her, and a moment passes, one full full of regret, resentment, sadness, and potential. Rey closes the Falcon’s door and ends the connection, but the narrative door remains open for J.J. Abrams to play with this storytelling device for Episode 9. Will Rey and Kylo stay pen pals? Or will they rekindle their bond in a moment of need? Only time will tell.

Rey’s lightsaber workout montage in The Last Jedi might be one of the most #fitspo things I have ever seen. But Tumblr user leofgyth pointed out recently that Rey’s moves in that scene look JUST like Kylo’s at the end of The Last Jedi, thanks to Rey downloading some of Kylo’s abilities following their first trip into each other’s minds in The Force Awakens. The Last Jedi dealt with both character’s desires to explore the gray areas of the Force, and the mirrored moves demonstrate their connection. Couple workout goals?

The Last Jedi contains a proposal. Kylo asks Rey to join him and rule the galaxy together. This is similar to what Anakin offers Padmé at the end of Revenge of the Sith, and in both instances, the offer is tragically romantic. Rey wants Ben to be good, Padmé wants Anakin to be good, and both of them are disappointed by the darkness in Anakin and Kylo. Kylo’s proposal is definitely not as smooth as Anakin’s, as mere seconds before it, he tells Rey her parents “threw her away like garbage.” Not exactly a great way to sell her on the benefits of being a galactic power couple. But the moment itself is tearful, twisted, doomed, and hot, especially when Kylo adds that “please.” Kiss, you idiots! 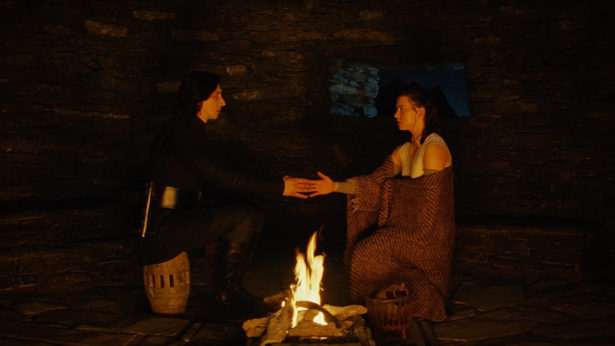 Getting to know someone usually takes time. For Rey and Kylo, just a few short sessions of ForceTime are enough to confide in each other with their deepest, darkest secrets and emotions. And knowing Luke isn’t the greatest with “feelings,” Rey turns to Kylo after her quick Dark Side cave jaunt. Then, the pair share an incredibly intimate exchange, when Kylo tells Rey, “You’re not alone,” and Rey reciprocates, “Neither are you.” She extends her hand to him to see if they can in fact touch each other across space and time, and Kylo slowly removes his glove, making himself even more vulnerable to her. They touched hands for the briefest of moments, and Reylo history was made.

After Rey mails herself in a coffin (Rian Johnson really wanted the Millennium Falcon’s escape pod to look like a coffin, according to The Last Jedi art book) to Kylo following their steamy hand touch, Kylo does what any good Dark Side apprentice is supposed to– he immediately puts Rey in cuffs and goes to bring her to Snoke. In a tense elevator ride, Rey appeals to his humanity and calls him “Ben.” They both look at each other’s lips and bore their eyes into each other’s. If there was any room for a kiss in The Last Jedi, it should have been there.

Kylo and Rey’s first lightsaber fight is antagonistic, and the moment where the lightsaber flies to Rey instead of Kylo is one of the best moments in all of Star Wars. This is their first battle as enemies, as Force users, and also lays the groundwork for some of their conflict in The Last Jedi, especially when Kylo proclaims that Rey “need(s) a teacher” and offers to show her the ways of the Force. Rey thinks about it for a second, and digs deep to find the extra strength she needs to defeat him and leave him scarred. Kylo is amazed by Rey in this scene, and Rey is still in full on hate mode, but fight illustrates their philosophical distance. Star Wars is all about balance, and this fight emphasized both ends of that scale.

The Throne Room fight scene in The Last Jedi is a cinematic marvel: the choreography, the blocking, the colors, and the performances. And within the film itself, the scene is rich with character and relationship moments for Kylo and Rey. First, Kylo at least partly kills Snoke to save Rey. ROMANTIC. Killing your boss for your lady? Dreams. I mean, it’s also because he just wants to rule the galaxy with her and stay evil, so, not the most well intended or thought out gesture, but it gets the job done. Rey and Kylo’s work at the beginning of the fight is so in sync, and Kylo is definitely even worried for Rey when he sees her arm get cut. And, Rey throws her saber to Kylo at the very end after she’s done kicking butt. A true partnership. The score composition for this scene is titled “A New Alliance,” and it demonstrates what they’re capable of, together. Also, if you like conspiracies, the cut Rey got on her arm left a scar in the shape of TWO TOUCHING HANDS. The scene is rife with chemistry, synergy, potential, and mutual respect. I can’t wait to see how their relationship evolves in Episode 9.