Since long before Rosemary Woodhouse had her baby back in 1968, pop culture harbored an obsession with the idea of a child of Satan living among us. Either as a son or daughter, the notion of Lucifer’s kid remains an ongoing staple of movies, comics, and TV. And the latest iteration to get the spotlight is the title character of The Chilling Adventures of Sabrina, whose third season just premiered on Netflix. But how does Greendale’s favorite witch stack up against our other favorite devilish kids? Here, we rank pop culture’s 7 most famous children of the Devil.

Oh, and sorry Hellboy. Your dad was just a Duke of Hell. Almost, but not quite. 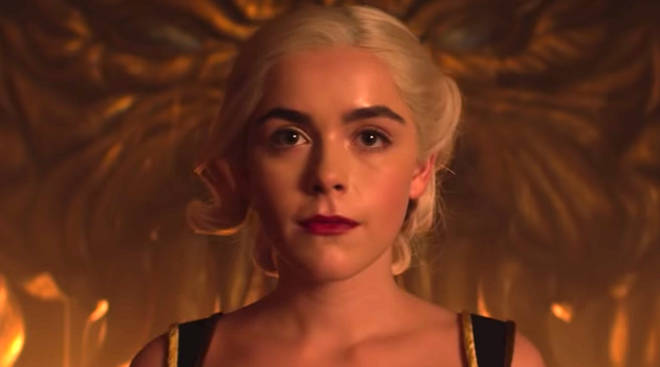 The newest addition to the list, but down the road she might rank higher on our list. Although she’s been around since the ‘60s as Sabrina the Teenage Witch, only the recent Chilling Adventures of Sabrina Netflix series unveiled her connection as Sabrina  Morningstar, daughter of Lucifer Morningstar himself. In fact, in this most recently completed third season, Sabrina takes her place as the Queen of Hell! After a few more seasons of infernal adventures, Greendale’s most prominent Hellspawn might become the most famous child of Satan yet in pop culture. But for now, she’s the rookie. 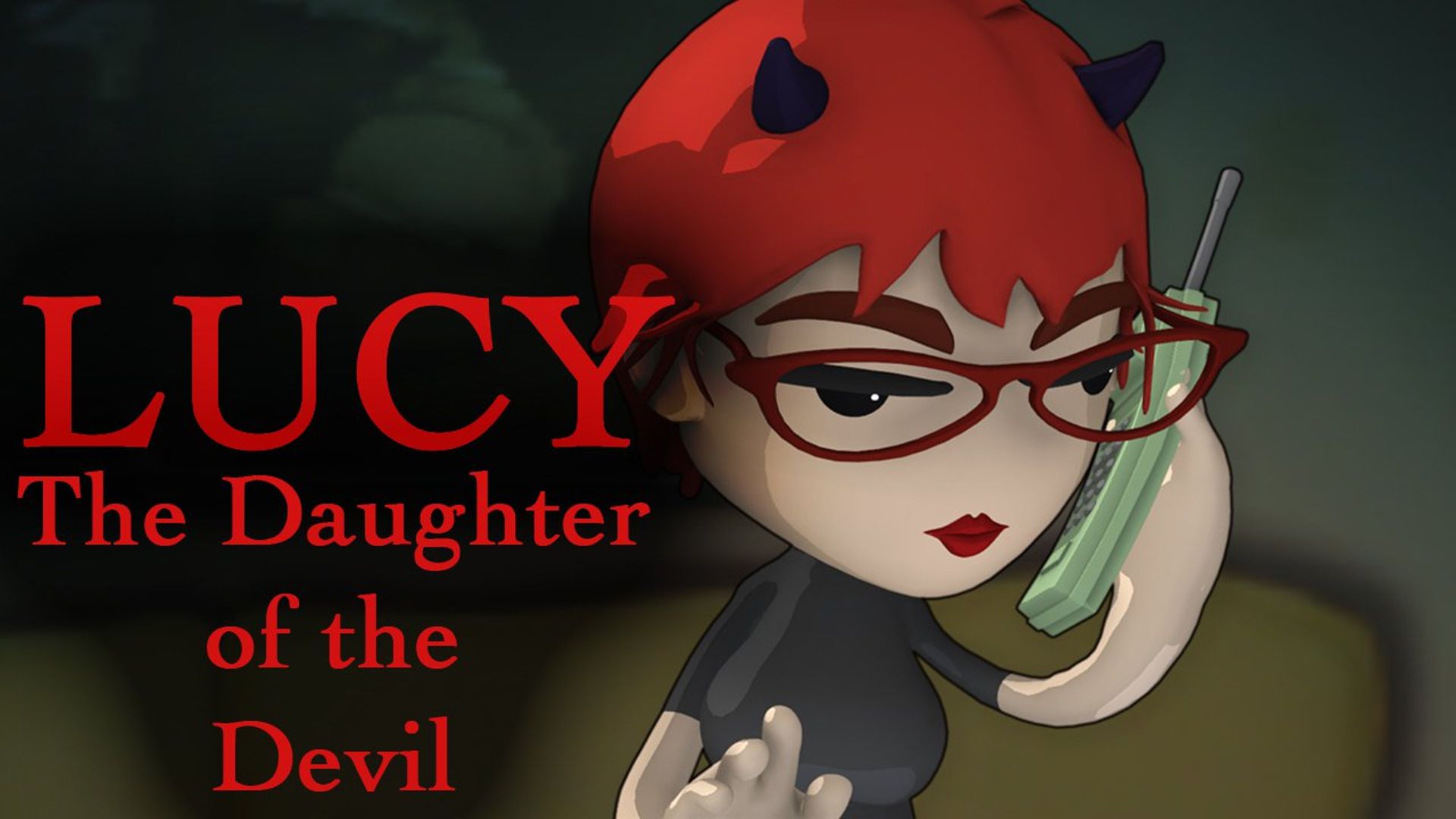 This Adult Swim series had a short life in the mid-2000s. In Lucy, Daughter of the Devil,  the titular young lady is the child of Satan and an unnamed woman, a union made in exchange for a Datsun 280 ZX. The show follows the young adult version of Lucy, now a hipster/slacker type, as she helps her dad’s world-conquering plans when she’s not tending bar at a place call Tequila Sally’s. Opposites attract; her boyfriend’s named Jesus. Although it only ran for 11 episodes, the show became a minor cult classic, remembered fondly by its fans. 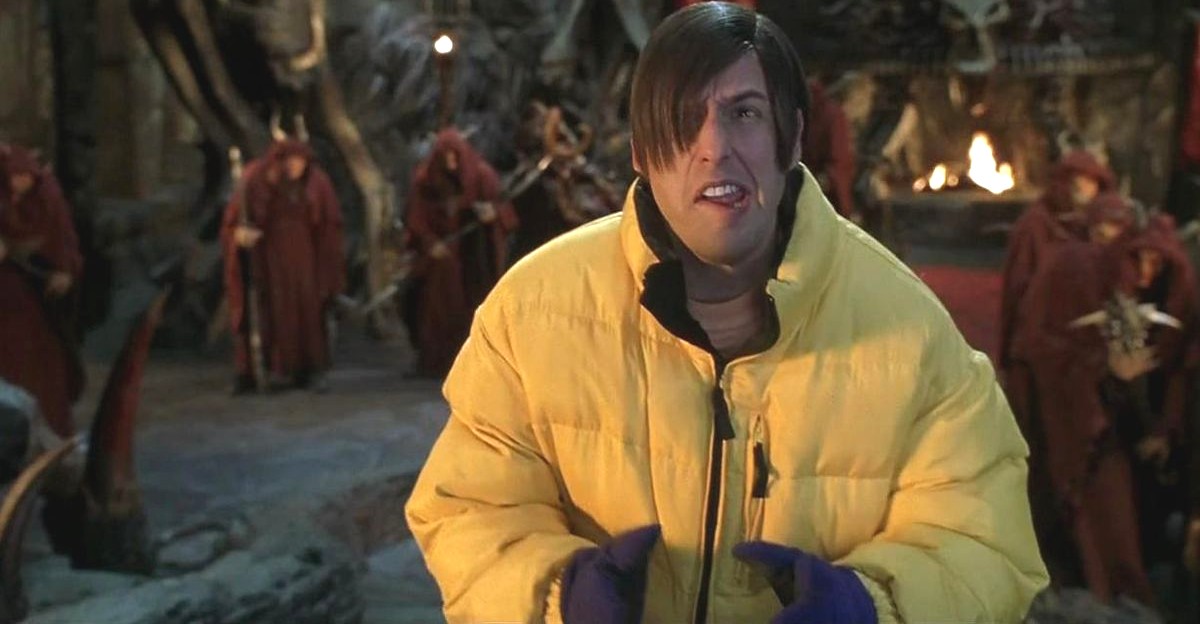 In the late ‘90s, Adam Sandler comedies repeatedly conquered the box office, and it wasn’t shameful to admit you liked them. When did that all change? Many cite 2000’s Little Nicky as the beginning of his decline. In this comedy, Sandler plays Nicky, one of the Devil’s three sons. Forced to name a successor after ruling Hell for 10,000 years, the Devil hopes to choose his favorite son Nicky for the job, but Nicky’s older brothers Adrian and Cassius have other plans .

In 90 short minutes, Nicky goes to Earth, falls in love, dies and goes back to hell – more than once – while lots of bad gags and even worse accents occur in between. Despite being nominated for five Razzies and being one of Sandler’s first big theatrical bombs, it became a cable TV staple, which is why a whole generation thinks of Adam Sandler when they think “son of the Devil,” and not just because he inflicted two Grown Ups movies upon them. 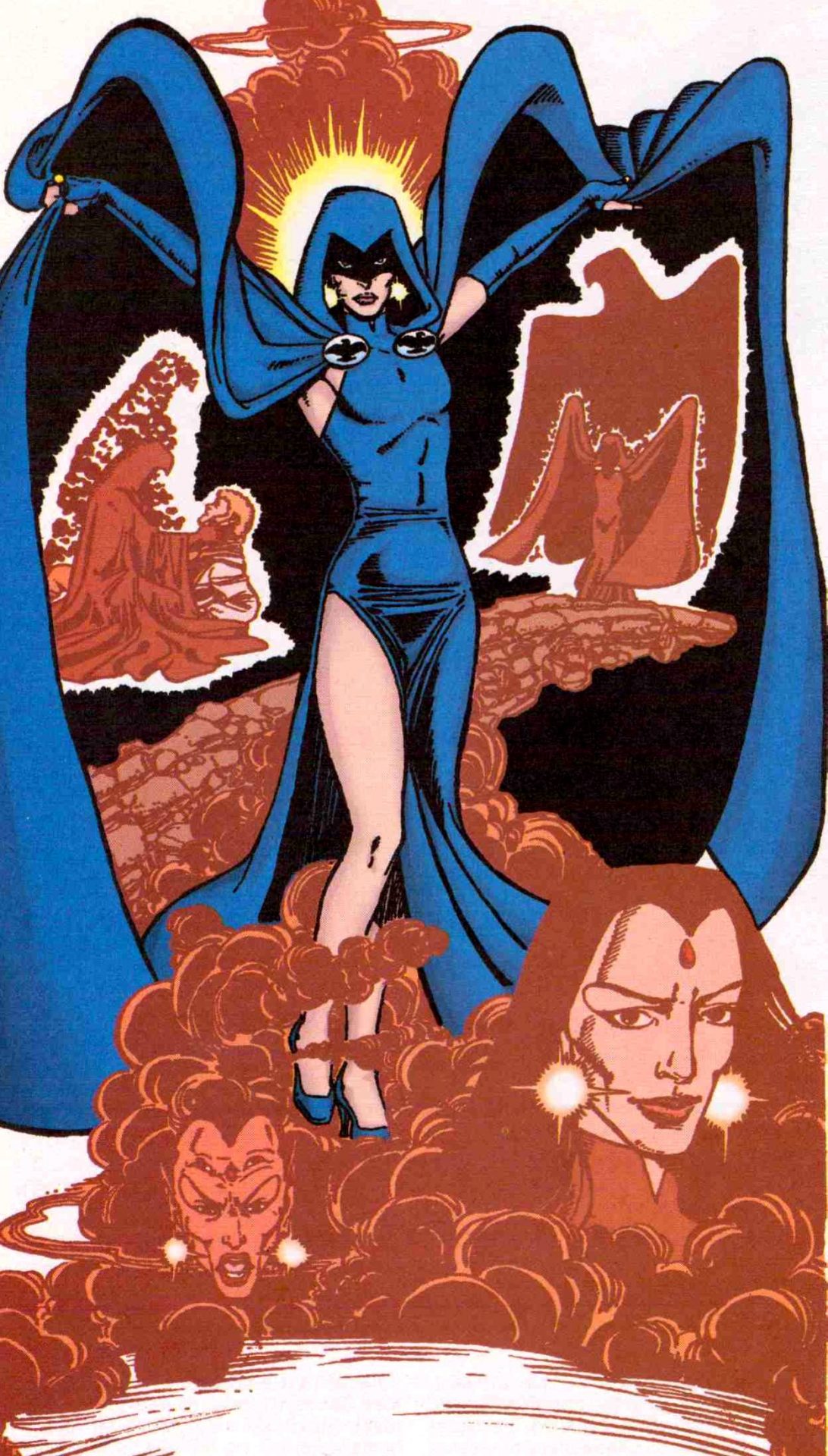 Following the success of Marvel’s demonic offspring (in our next entry), DC created their own “spawn of Satan.” During DC’s relaunch of Teen Titans in the early ’80s, a mysterious witch named Raven brought the team together to fight her father. Her pop just happened to be the Devil – well, more or less.

Early on, she revealed that her mother was part of a cult, and her father was the red-skinned, horned lord of a Hell dimension named Trigon. Although not technically Satan, when called by that name he implies that it’s one of his”many names.” So yeah, he’s basically the Devil. Raven would succumb to Poppa’s influence and go full evil herself and back to good again many times. But even though the word “Devil” is never used on TV, her origin remains pretty much intact even in the popular 2003 cartoon series. 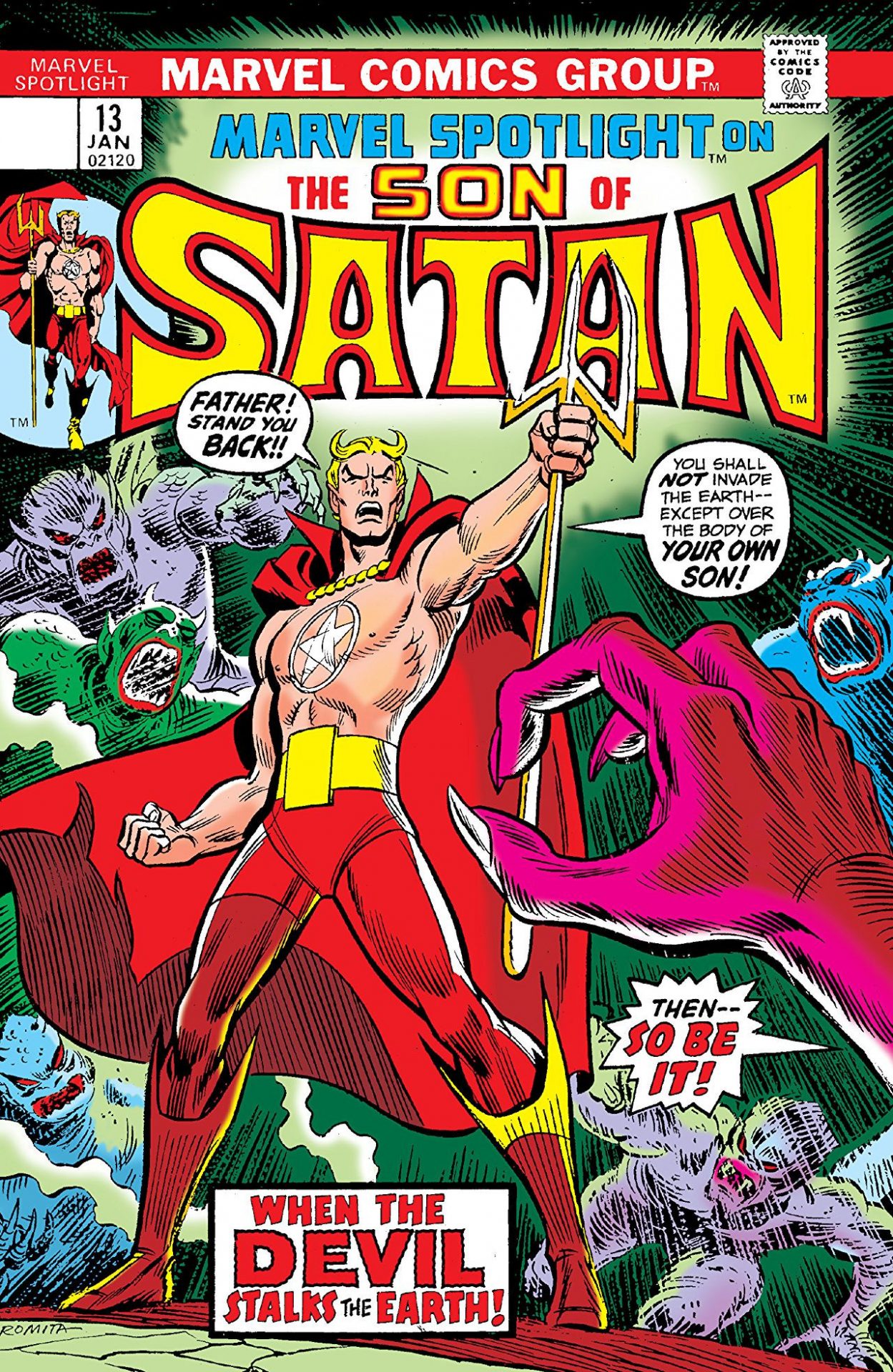 Another example of how Rosemary’s Baby popularized all things Devilish was Marvel Comics’ 1970s series focused on his progeny. Like with trend-chasing characters Luke Cage (blaxploitation) and Shang-Chi (kung fu), Stan Lee was determined to cash in on “Satanic Panic,” and planned to introduce Satan as a superhero.

Editor Roy Thomas suggested they not go that far, and instead introduced Satan’s son Daimon Hellstrom. First introduced in a 1973 issue of Ghost Rider as a supernatural investigator, Daimon soon got his own series, The Son of Satan. His sister Satana also got a spin-off. It’s wild to think that in the ‘70s, an 8-year-old could pick up an issue of that next to Spider-Man at the drug store, but alas, it was a different time. After his series was cancelled, Daimon joined the Defenders, and still pops up in the Marvel Universe all the time. He is soon getting his own series from Marvel Television which debuts this year on Hulu, which will undoubtedly make him more popular than ever. 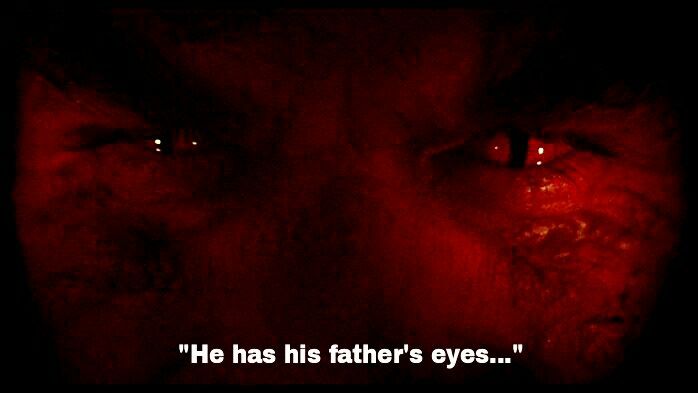 One can make the case that Roman Polanski’s 1968 horror masterpiece Rosemary’s Baby marks the beginning of pop culture’s obsession with Satan, and certainly with the idea that Satan has a child who lives in the modern world. Its success prompted The Exorcist, The Omen, and countless others, although this classic is film is not about the baby so much as it is about expectant mother Rosemary Woodhouse (Mia Farrow) trying to protect herself from mysterious, possibly harmful people around her. But the actual baby does make an appearance at the end of the film – sort of.

While we never actually see young infant Adrian’s face, we do hear his cries coming out form his cute little black bassinet. A black bassinet with an upside crucifix hanging above it, because of course it has one. The audience is told he has “his father’s eyes,” and apparently his hands and feet are not exactly normal either (Rosemary probably knitted tailored booties for his tiny cloven feet). But our imaginations make Adrian seem infinitely more terrifying anything the filmmakers might show us, a choice that forever ingrained her demonic child our collective consciousness.

After Richard Donner’s 1976 mega-hit The Omen hit theaters, the name Damian became forever entangled with the idea of Satan’s son. (Just ask anyone by that name who grew up in the ’80s or ’90s how fun that was at recess.) Richard Donner’s film introduced Damien Thorn as a cherubic child with a penchant for evil, the adopted son of two American diplomats abroad. But audiences soon learn that Damian is the Anti-Christ, complete with a Satan-worshipping nanny and the number 666 tattooed on his scalp. Of course, the creepy music following him around felt like a big hint as well.

The product of Satan and a Rottweiler dog, Damien is the ultimate bad luck charm. Everyone around his starts turning up dead, and even animals at the zoo think he’s a jerk. When his adoptive father realizes that a trail of death follows his son wherever he goes, well…all hell breaks loose (sorry.) Damian’s adventures would continue in two more sequels, a remake, and even a short lived TV series.  Oh, and a brilliant South Park parody character. But he’ll always be most sinister as a smiling kindergarten-aged kid.