Thanks to the MCU and the DCEU, heroes and villains that once lived in the shadowy recesses of comic book pages have been thrust into the spotlight. But even in a landscape that feels like it’s left no stone unturned, there are always more characters worth meeting. One villain (or antihero, from a certain point of view) who deserves her due: Satana Hellstrom, Princess of Hell. If you’ve never heard of her, don’t worry—most people haven’t. In fact, I’ve spent years scouring Artist Alley on the convention circuit and have never once seen any Satana fan art for sale. The only reason I know of Satana is due to Marvel’s Facebook game, Avengers Alliance, where she’s a playable character. But thanks to Scott Derrickson, the director of Doctor Strange, all that could be about to change.

Over the last week or two, Derrickson has been dropping a trail of hints on Twitter that he’s working on Doctor Strange 2. First, there was a GIF of Doctor Strange exiting Hell. Then a retweet of writer C. Robert Cargill indicating the two are working together again. And finally, there was this retweet of a rare piece of Satana fan art.So who is Satana? First introduced in Vampire Tales #2 in 1973, the half-human daughter of literal Satan was part of the Marvel Monster Group. (While Satana was created specifically by Roy Thomas and John Romita Sr. for Vampire Tales in 1973, other characters that were created elsewhere and gained fame during the comics’ run include Morbius the Living Vampire and Blade.) 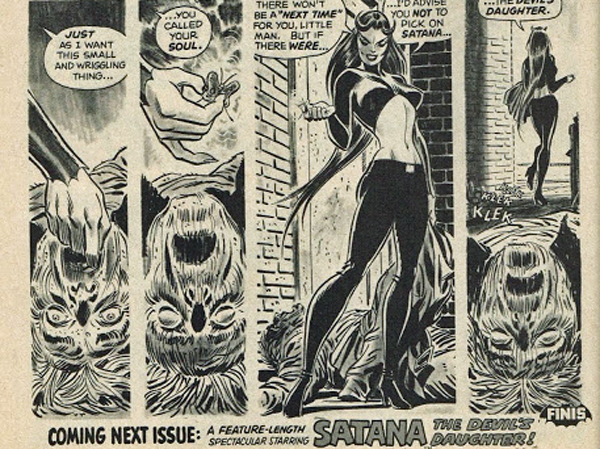 She is introduced in a four-page stand-alone story, walking alone down a city street, stalked by a rapist. Satana lures the creep into an alley and DEVOURS HIS SOUL. By January of 1974, Satana was confirmed as Daimon Hellstrom’s sister in Marvel Spotlight #13, albeit only in flashbacks. Over the next few years, Satana’s personality and power set solidified until she reached her final form: a succubus locked into a parasitic relationship with a Basilisk demon which she could summon forth from her body to destroy her enemies.

Ostensibly a villain at the outset, Satana has always been more an antihero from a certain point of view (a female one). Her early adventures see her killing evil men and saving women from being burned at the stake as witches. Her transformation into antihero came to a head in 1979 when she teamed up with Spider-Man to save Doctor Strange after he read a book he wasn’t supposed to and turned himself into a werewolf while his soul was trapped in Hell; Satana knew he was too important to the balance to let his soul whither… plus, it was slightly her fault, as the Shiatra Book of the Damned was intrinsically linked to the Basilisk within Satana. With the creature becoming more powerful each time Satana summoned it, it attempted to use Strange to cross over to Earth and wreak havoc. Satana sacrificed herself, allowing the Basilisk to kill her, knowing their bond would destroy the demon as well. But the daughter of literal Satan can’t actually die, so Satana simply returned to Hell. Over the next few decades, the demonic succubus would be part of the Thunderbolts as they time-hopped away from prison, as well as claiming the throne of (a) Hell and setting out to making her domain into the most righteous party in the afterlife. Her Hell features Jim Morrison, just FYI.

As her power set and ancestry put Satana square in the supernatural realm, she’s been a natural foil for Doctor Strange. As a mercurial figure, Satana has been both an ally and an enemy to Strange. But whether she’s having a spat with her father over the best use of souls or marrying Deadpool, Satana is never boring. In fact, I’d argue the character is ripe for a fourth-wave feminism reimagining. After all, who among us hasn’t wished she could open her mouth and screech out a Hellspawn that would turn a man’s soul into an ethereal butterfly which we then consume to gain power?

More from the comic book pages!