Tatooine lovers, rejoice! Another planet orbiting a binary star system has been discovered, which can only up the odds of eventually finding an IRL sandy world resembling the one in Star Wars. On top of that, this is the first time NASA’s Transiting Exoplanet Survey Satellite ( TESS) has discovered a planet orbiting a binary star system, possibly foreshadowing the discovery of tons of similar planets as it observes “hundreds of thousands of eclipsing binaries” over the course of its initial two-year mission.

According to a recent NASA press release, the new circumbinary planet (that’s the technical term for a planet orbiting a binary star system) was first discovered, surprisingly enough, by a high school student. The student, Wolf Cukier, who’s in his senior year at Scarsdale High School in New York, was interning for the space agency in 2019 when he noticed a peculiarity in the data he was charged with tracking.

Cukier says in NASA’s release that he was “looking through the data for everything the volunteers had flagged as an eclipsing binary, a system where two stars circle around each other and from our view eclipse each other every orbit.” Then, only about three days into his internship, Cukier saw an unusual signal from a star system 1,300 light years away dubbed TOI 1338. Cukier says he thought the unusual signal was a stellar eclipse at first, but reconsidered its origin when he discovered “the timing was wrong.” 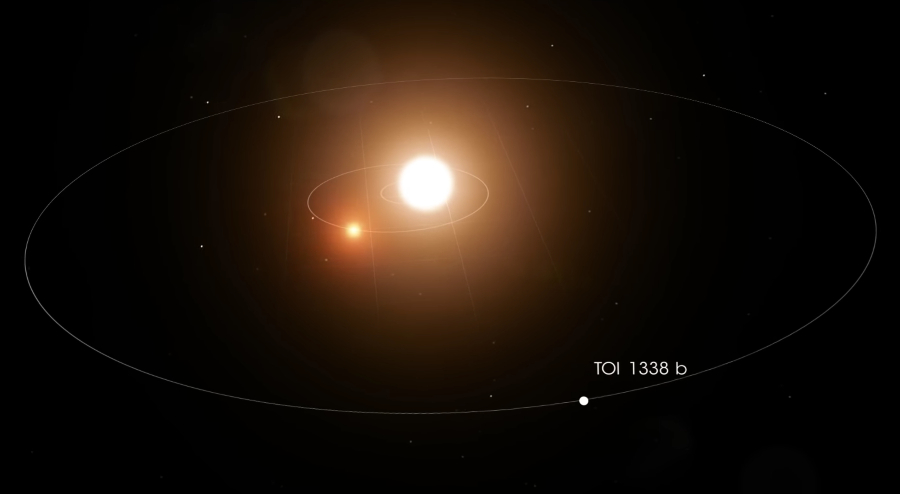 The planet, which now carries the humble moniker, TOI 1338 b, was discovered thanks to the fact that it dims the light we receive from its parent stars when it passes between them and Earth. Although the dip in light is minuscule, especially when dealing with binary star systems, it’s significant enough to allow NASA scientists to record it. And when Cukier says that “the timing was wrong,” he’s referring to the fact that when the smaller star from the binary system crosses in front of its larger partner, the former dims the light we receive from the latter. But that happens at regular intervals, and this dimming occurred at a different time, meaning it couldn’t have been attributable to the smaller star.

In regards to the planet itself, NASA says that TOI 1338 b is about seven times larger than Earth, making it larger than Neptune, but smaller than Saturn. TOI 1338 b’s orbit is completed once every 93 to 95 days, although it will disappear from our line of sight between November 2023 and 2031, when the angle of its orbit will change relative to Earth. But that orbit will still be stable for the next 10 million years, which hopefully means we’ll be able to cruise around in a Landspeeder like this one on its surface one day.

What do you think about this newly discovered circumbinary planet? Are you still amazed by all of the exoplanets the various space agencies have discovered, or are you just waiting around for the discovery of a truly habitable world? Let us know your thoughts in the comments!