There’s an ocean of difference between understanding conceptual ideas that describe the way the world works, and being able to actually visualize those ideas accurately. We all know, for example, that it’s Earth’s own rotation that makes the sky appear to move above us, even though it apparently seems like the sky itself is moving. To help hone our intuitions about this particular phenomenon a bit better, we have here a stabilized sky timelapse video, which provides a unique—stunningly gorgeous—way of viewing Earth’s rotation.

While there’s been no shortage of incredible cosmological insights and illustrations lately (including those of twin galaxy collisions, spewing “fermi bubbles,” and glowing black holes), this timelapse video featuring a night sky full of the Milky Way’s hazy band of stars, created by San Francisco-based photographer Eric Brummel, is still something special. For starters, unlike the other pictures and videos that often accompany anything space-related, this isn’t an illustration, but is instead, real-life footage. Which, of course, makes it all the more wondrous to behold.

Brummel recorded the video at Font’s Point in the Anza-Borrego Desert in California back in August 2016, although it’s just recently gone viral on twitter via the Wonder of Science. As expected, a cursory glance through the comments accompanying the video on twitter reveals a whole lot of people having their minds exploded like so many supernovae, although there are still some folks who doubt the authenticity of the clip. Brummel notes that the video is indeed real, and there’s no reason to doubt that claim as this isn’t a video of something ridiculous like say, Brad Pitt playing Johnny in The Room.

In terms of how Brummel captured the stabilized timelapse video, that all comes down to the use of an equatorial mount. For those who aren’t proficient stargazers, an equatorial mount is essentially a motorized tripod that’s been programmed to track the movement of celestial objects in the sky. It does this by compensating for Earth’s rotation by rotating itself at the same speed, but in the opposite direction. The illustration below shows how an equatorially mounted telescope, the green cylinder, rotates in the opposite direction of Earth, thus stabilizing its view of the sky. The telescope without an equatorial mount, the red cylinder, fails to compensate for Earth’s rotation, barring it from perceiving a stabilized view. 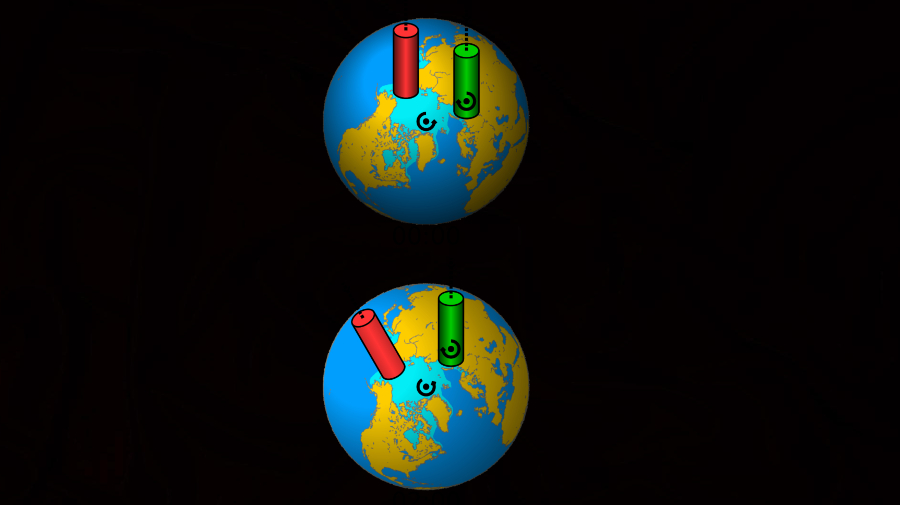 An illustration showing how an equatorial mount allows a telescope to stay trained on celestial objects. Geo Swan

According to Brummel, “The purpose of the film [is] to highlight that it’s the Earth that rotates, not the sky,” which he says is a fact that is well known, but rarely perceived. Now if we could only create a stabilized way to view all the current climate catastrophes taking place, so we could develop a more intuitive sense of that whole picture too.

What do you think about this stabilized timelapse video of the night sky? Has it completely changed the way you think of Earth’s rotation, or are these kinds of stabilized videos old news for you? Try to blow people’s minds with other, cool, new ways of looking at the universe in the comments!