On July 30, NASA and United Launch Alliance sent the Perseverance robotic rover hurtling toward Mars. Now, thanks to a new visualization tool, people can follow along as the rover makes its way toward the Red Planet. The tool should be entertaining for a while, too, as Perseverance’s journey through space is going to take six months.

Wonder where @NASAPersevere is as it hurtles through space? Follow along with our crisply rendered web app, @NASA_Eyes on the Solar System, which shows where the spacecraft is in real-time using the same data the team uses to plan the path to Mars. https://t.co/YYyy3BPJha pic.twitter.com/Fxrzb7qAcP

NASA recently announced the availability of the visualization tool, dubbed Eyes on the Solar System. With the tool, NASA notes people are able to follow along as “humanity’s most sophisticated rover” ever made soars through space.

“Eyes on the Solar System visualizes the same trajectory data that the navigation team uses to plot Perseverance’s course to Mars,” Fernando Abilleira said in a press release from NASA that comes via Inverse. Abilleira, the Mars 2020 mission design and navigation manager, added that “If you want to follow along with us on our journey, that’s the place to be.” 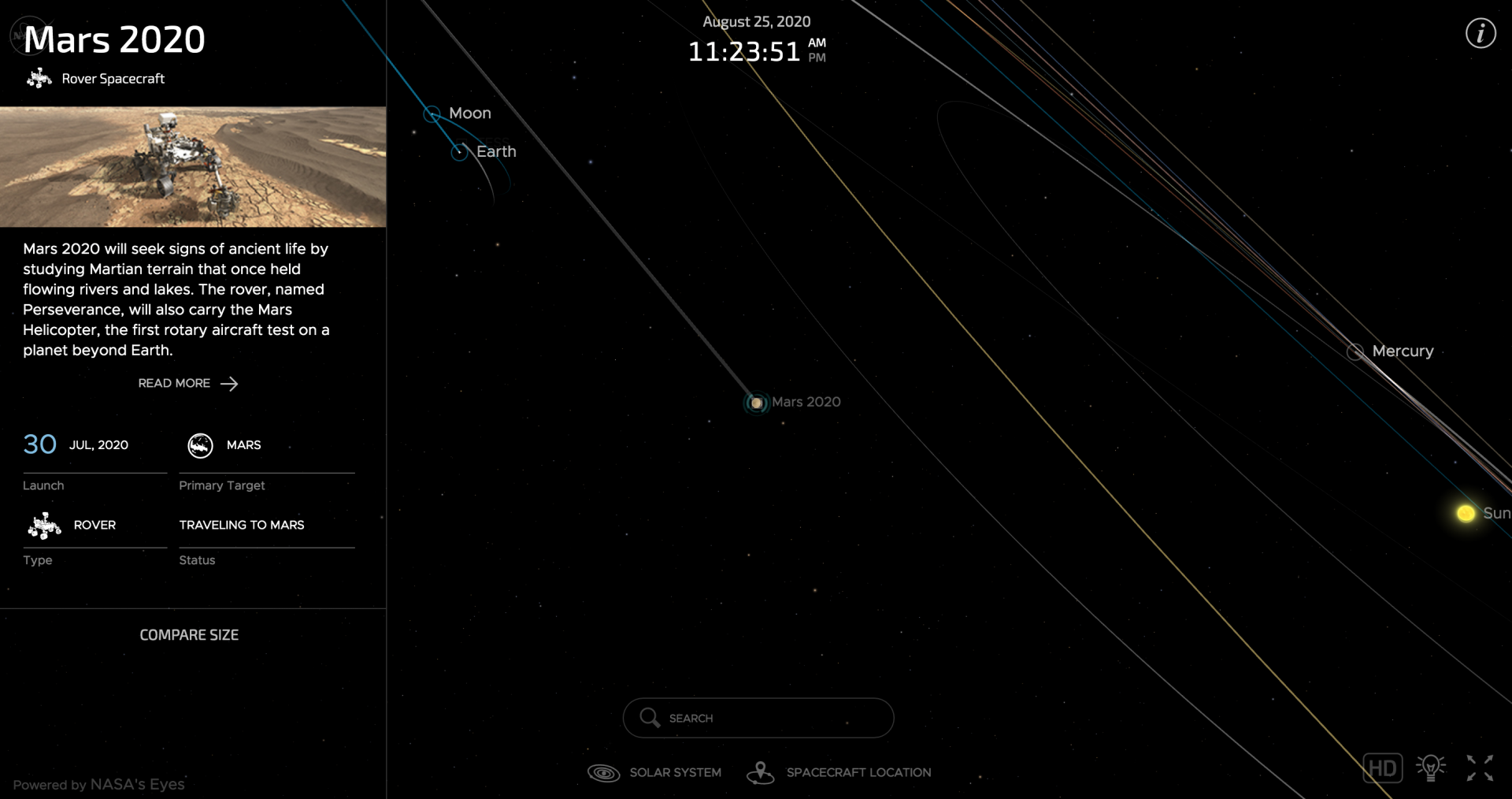 Using the tool is mostly straightforward, although it’s unclear why some key travel metrics don’t populate automatically. NASA does provide various counters for miles traveled and traveling speed, however, on a separate page. (As of this writing, Perseverance is 246 million miles from Mars and traveling at 71,000 miles per hour.)

While it’s fun to follow Perseverance as it heads toward Mars, the real show will begin once it gets there. That’s because in order to properly land on the Martian surface, the rover will need to perform a series of maneuvers that would make David Blaine think twice. Then, once on the surface, the rover will release a helicopter, as well as begin collecting soil samples that may contain alien life.

My first planned Trajectory Correction Maneuver was a success. I do TCMs on my journey to stay on target for a Feb. 18, 2021 date with Mars. I left Earth over 2 weeks ago and already put on 27+ million miles. Only ~265 million more to go! #CountdownToMars https://t.co/1PJU9YwxvJ pic.twitter.com/wdvVPHqPvJ

“With all our orbital assets circling Mars as well as Curiosity and InSight on its surface, there is new data and imagery coming in all the time about the Red Planet,” Jon Nelson, visualization technology and applications development supervisor at JPL, said in NASA’s press release. “Essentially,” he added, “if you haven’t seen Mars lately through Eyes on the Solar System, you haven’t seen Mars.”

What do you think about this visualization tool that lets you track Perseverance’s progress? And what kind of surprises do you think the rover will find on Mars? Let us know your thoughts in the comments!