Fossil of Peacock-Like Dinosaur May Have Preserved DNA Remnants - Nerdist

Fossil of Peacock-Like Dinosaur May Have Preserved DNA Remnants

Although dreams of an IRL Jurassic Park are still just that, nearly every dinosaur finding still tantalizes with possibility. In a new fantasy fueling discovery, scientists in China say they’ve found evidence of “remnants” of original dinosaur DNA. Which may or not actually be there depending on how future experiments shake out. 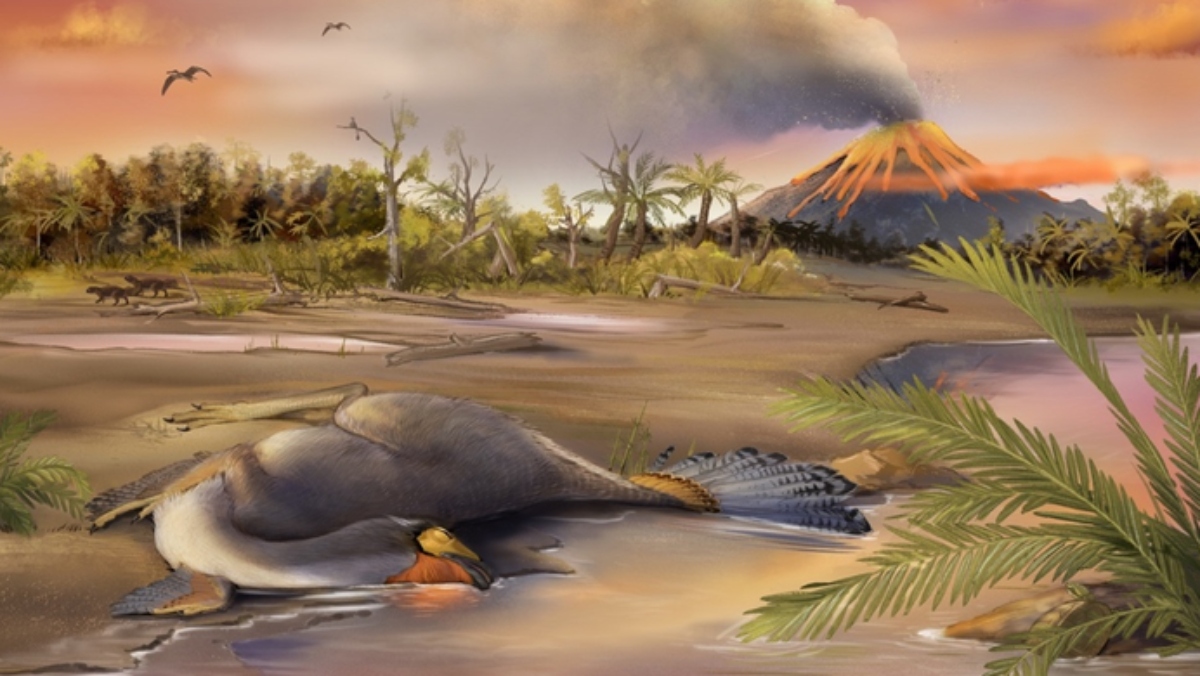 Gizmodo reported on the discovery of the evidence, which a team of scientists from the Shandong Tianyu Museum of Nature outlined in a new paper in the journal Communications Biology. In the paper, the scientists describe how they isolated “exquisitely preserved” cartilage cells from a 125-million-year-old dinosaur from Northeast China. One that apparently looked a little like a peacock. The specimen, from the genus of small feathered theropod dinosaurs, Caudipteryx, was approximately the size of the modern day, fanciful bird. And it even had a long, feathered tail.

To look for evidence of dino DNA, the scientists took a piece of fossilized cartilage from the specimen’s right femur and decalcified it. They then used different chemical and microscopy methods to analyze it; in part by staining it with hematoxylin and eosin, chemicals that react with the nucleus and cytoplasm of extant cells. (The stains are immediately below. The Caudipteryx cells are on the left, those of the chicken, on the right.) 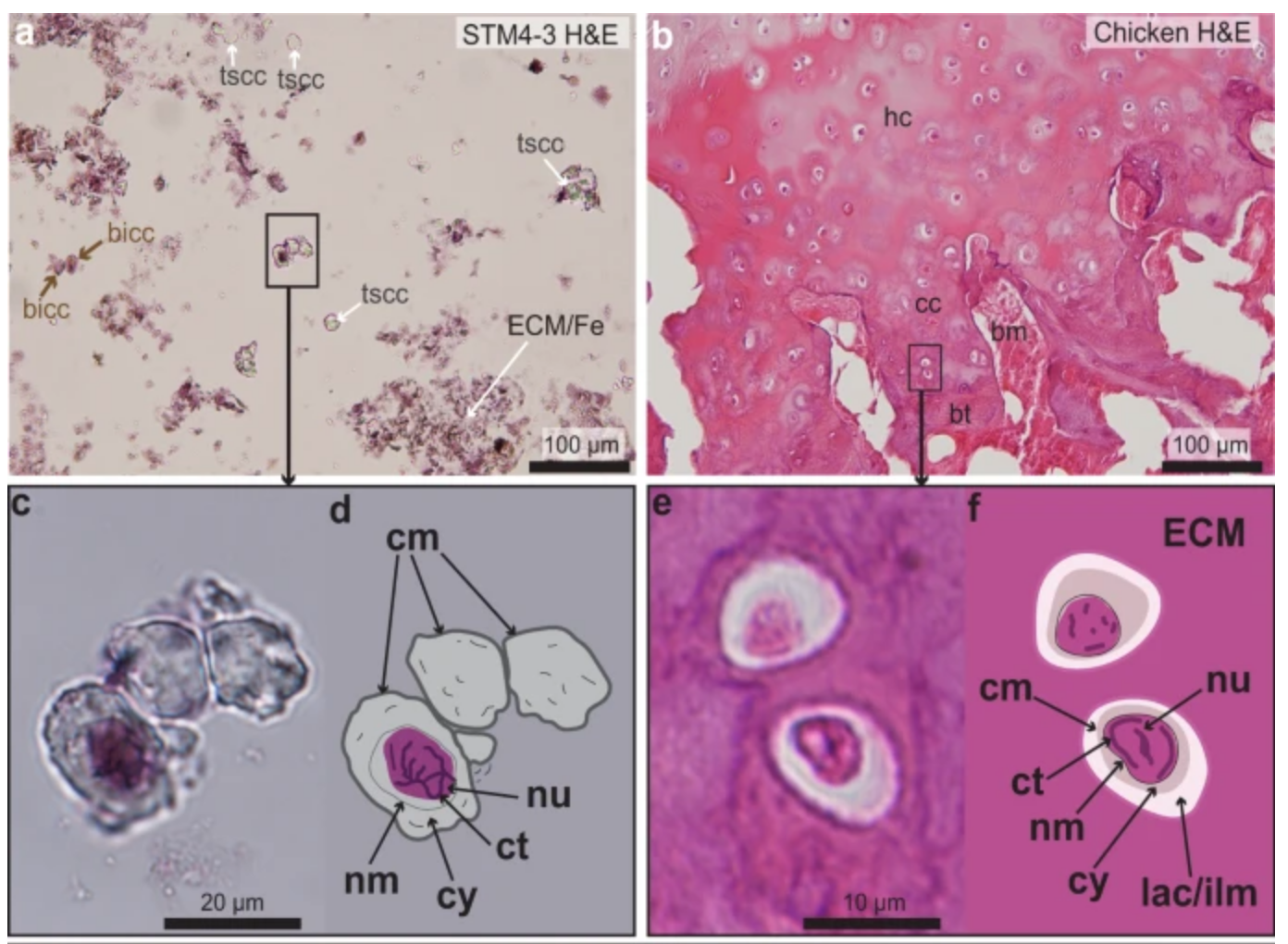 When the scientists stained both the Caudipteryx cartilage and that of a chicken, they found the two specimens reacted identically. The scientists even say that one of the dinosaur’s cartilage cells revealed a nucleus with fossilized threads of chromatin. That’s the material that makes up the chromosomes of organisms other than bacteria.

“[W]e are obviously interested in fossilized cell nuclei because this is where most of the DNA should be if DNA was preserved,” Alida Bailleul, corresponding author of the study, said in a press release. The scientists have “very exciting data,” but are “are just starting to understand cellular biochemistry in very old fossils,” she added. 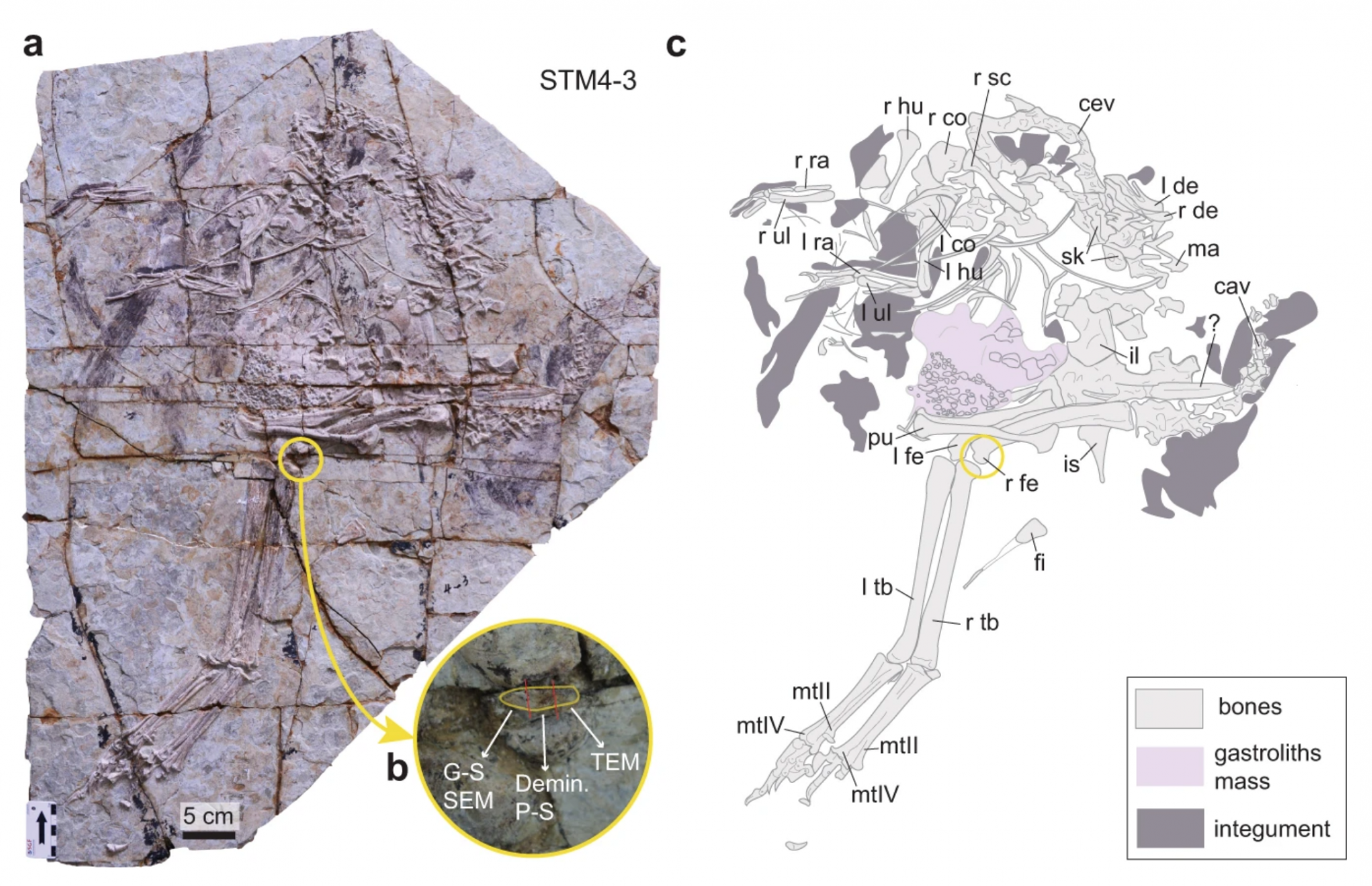 Indeed, as Gizmodo‘s report highlights, many experts believe that these researchers have not actually found evidence of dinosaur DNA. They told the news outlet, for example, that—even under the best circumstances—DNA couldn’t last more than three million years. Let alone more than 100 million. And that the chemicals may have been staining inorganic matter that only looks cellular in nature.

As of now, the most ancient DNA that scientists have been able to sequence was that of a million-year-old woolly mammoth. And the youngest dinosaurs are at least 65 million years old. But if future experiments do confirm this evidence as real, then that really changes things. At least in our fantasies, where reanimated dinosaurs and Ian Malcolms abound.