OUT OF BLUE Strives for Cosmic Understanding (Review)

Procedural murder mysteries are like so many grains of sand on so many beaches. They’re on TV and in the movies more than maybe any other kind of story is. (Even more than vampires, you guys.) There are tons of great murder mystery movies and shows, and you’ve probably seen them all. But occasionally there’ll be a movie that twists the usual by-the-numbers genre into something slightly above its usual lot. Whether or not it fully pulls off this attempted elevation is for the individual audience member to decide. Carol Morely’s Out of Blue, for example, blends typical neo-noir trappings with existential, cosmic understanding. And it almost works.

Morley directed one of the more interesting films I’ve seen in recent years, Dreams of a Life, a truly heartbreaking documentary with staged and reenacted moments about the story of a woman in England who, despite having friends and various boyfriends who claimed to care about her, died alone in her apartment and was undiscovered for three years. The movie captures the element of, “What does it all mean? What is it all for?”, as well as the triviality and preciousness of life in a way that I’d never really experienced before. There’s a degree of that in Out of Blue, but it unfortunately gets stuck in the weeds over other weird stuff.

Patricia Clarkson plays Det. Mike Houlihan, a hard-bitten, alcoholic homicide cop in New Orleans who has to investigate the mysterious death of a brilliant and acclaimed astrophysicist named Jennifer Rockwell (Mamie Gummer), who was at work on new theories about black holes. Rockwell seemingly had it all and had no enemies, so who could want her dead? Various people are suspected, including a shifty colleague (Toby Jones), her academic boyfriend (Jonathan Majors), and even possibly members of her own family (who include James Caan and Jacki Weaver). 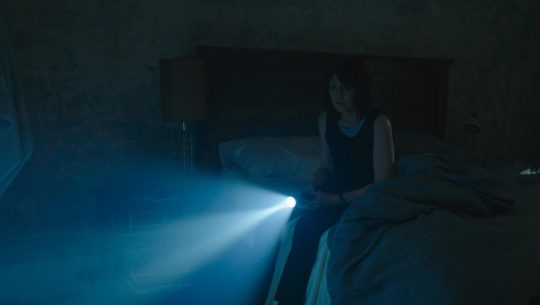 While investigating, Mike has to come to grips with her past and her place in the universe in ways she’s never dealt with before. Though good at her job, her tendency to fall off the wagon makes her a bit of a liability. She also keeps having strange nightmares and visions due to the circumstances of the Rockwell case that she can’t quite work out. Her only true confidante is a TV newswoman named Stella Honey (Devyn A. Tyler), who seems to show up at the most convenient times.

There’s definitely a level of unexplained strangeness to the proceedings that seems to want to veer toward the David Lynchian but never quite gets there. The movie is based on the novel Night Train by Martin Amis, which is described as a “comedic parody of American detective novels,” and which incorporates elements of the cosmic and chaotic. The film certainly doesn’t seem to evoke any level of parody or comedy that I can intuit. It feels all too earnest in all of its endeavors to achieve any such satire, choosing instead to treat its subjects and their search for the unknowable truths of the universe like lost particles trying to find a nucleus. 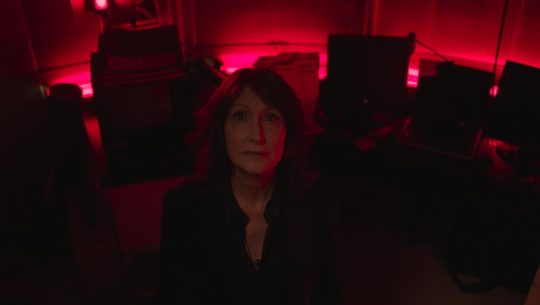 Out of Blue is not without its charms, of course. Clarkson does a great job being as hard-boiled as she’s able to be; with every one-liner and gruff comeback she makes the character feel all the sadder, hopefully on purpose. The music by Clint Mansell and the cinematography by Conrad W. Hall lend Morley’s script and direction helpful otherworldliness. And for all its po-facedness, the mystery at hand is generally quite compelling and the payoff works for the most part.

But ultimately, Out of Blue isn’t weird enough to make the more ethereal parts of its narrative as successful as they could be. It’s like an existential dream kept getting in the way of a fairly rote detective movie. Despite a strong cast and some great moments, Morley never quite strikes the balance that’s probably required, even if her heart and mind are very much in the right place.