Curious About Film Noir? Here's Where to Start - Nerdist

Curious About Film Noir? Here’s Where to Start

One of the most fascinating and often misunderstood genres in the history of cinema is a little period that most scholars agree only lasted between 1941 and 1958.

But that’s only kind of true. Film Noir–a term coined by French critics in the 1960s–is a fairly fluid title, usually referring to crime movies, made in black and white, often B-movies, and visually defined by chiaroscuro lighting and extreme angles in the German Expressionist model, brought over to Hollywood by European filmmakers fleeing the Nazis.

I’ve just explained it and even I kind of didn’t explain it. Noir is more of a thing you feel than what you can see, and sometimes movies with all the visual hallmarks aren’t quite part of the actual cycle. See? It’s confusing. So if you’re trying to get into Film Noir, what do you do? Where do you start? To help us, we enlisted the aid of the man who knows more about the genre than anyone else, who has been dubbed “The Czar of Noir,” Turner Classic Movies host Eddie Muller. 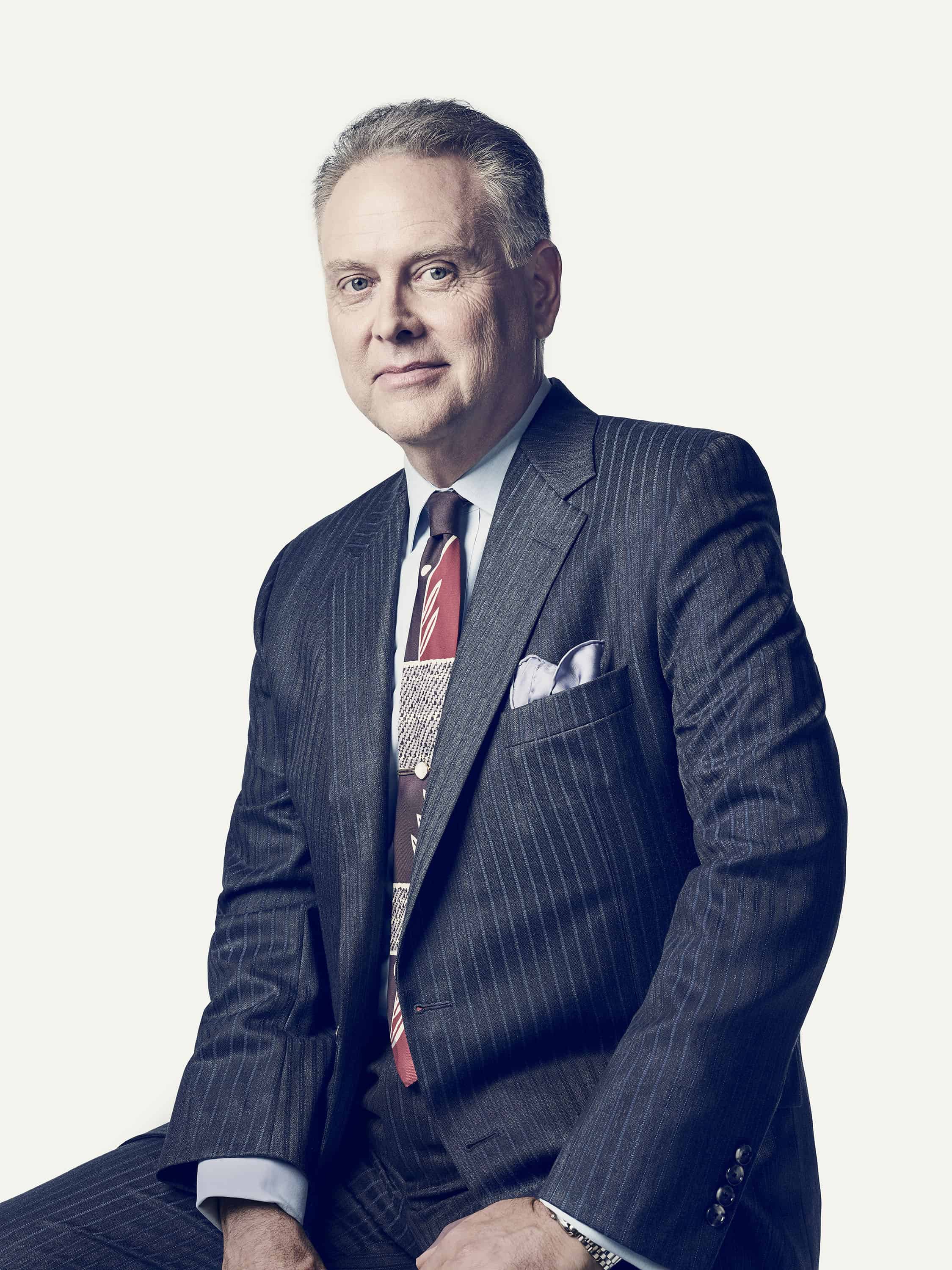 Maybe the first big question is, why get in to Film Noir at all? Muller’s love of the genre stems from his father, a sports journalist from the height of the period. “I felt like he had lived through something that I was seeing only the tail end of,” Muller explained, “and this is something that figures into all the work I do, sort of keeping alive the best of what has happened, and not allowing time to move on so quickly that all this stuff is forgotten and abandoned.”

“I’m a bit of a cultural scavenger,” he continued, “and I just think that is really important. We absorb and regurgitate things so fast now that there’s no sense of the value, there’s no sense of really sifting through to find the best, the undiscovered stuff, and I’ve always done that. I mean, that’s what I do. I collect 20th century ephemera. I have a very strong personal connection to that.”

So, then what do you do if you too want to dive into 20th century ephemera? According to Mr. Muller, there’s two movies you need to watch immediately. “Double Indemnity is where you start. And Out of the Past. I mean, those are the two that get the whole package. The endings are really noir.”

If you want snappy, sexy wordplay, this is the movie for you. Directed by Billy Wilder from a novel by the great James M. Cain, the screenplay was actually written by Wilder and another heavyweight of hard-boiled literature, Raymond Chandler, the creator of seminal private investigator Philip Marlowe.

The story follows an insurance salesman named Walter Neff (Fred MacMurray) who begins a steamy affair with Phyllis Dietrichson (Barbara Stanwyck), the younger wife of a rich guy on his route. She convinces Neff to bump off her husband to make off with the insurance money, but Neff knows in order to make it work, they’ll need to make it look like an accident…which will pay double. The trouble is, Neff’s best friend and mentor is Barton Keyes (Edward G. Robinson), the best and savviest insurance investigator in the game. If Neff can fool Keyes, maybe he and Phyllis can get away with it. Except it’s a noir, so they won’t. 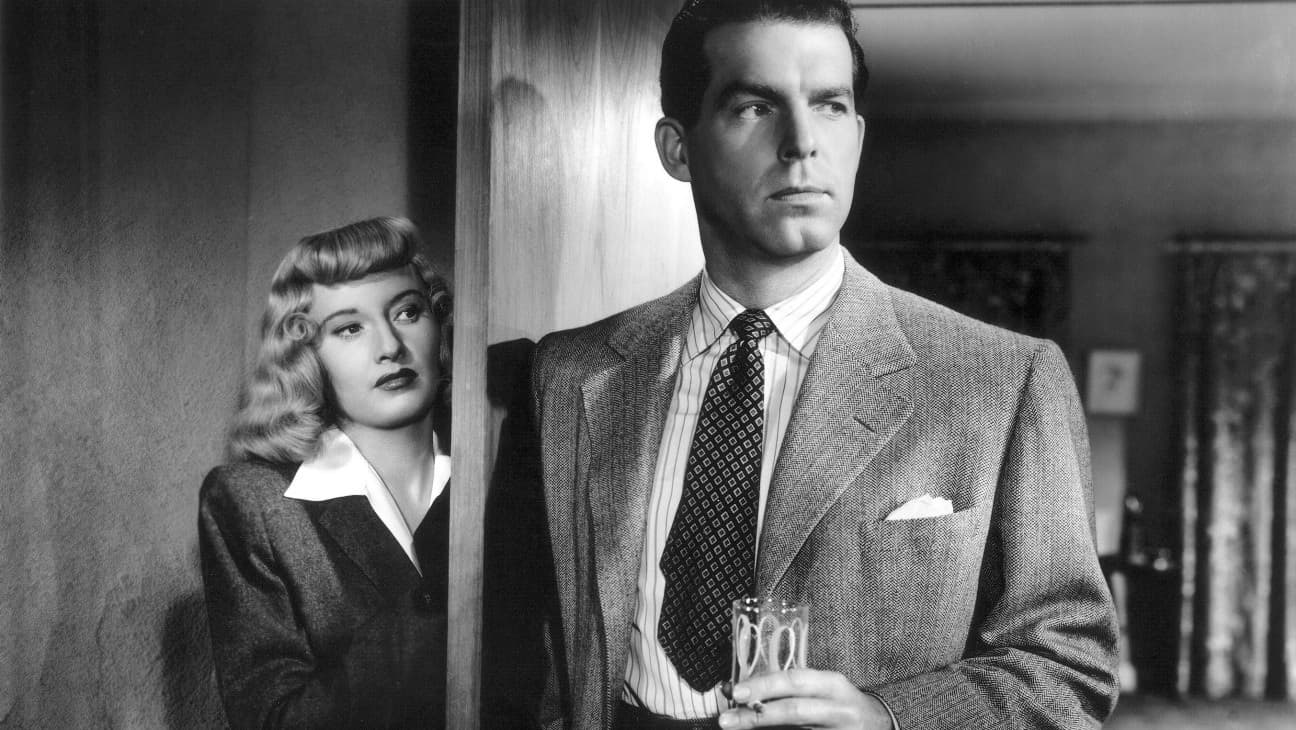 As great as the plot of Double Indemnity is, it’s the fraught, chaste-but-not-really sexual politics that make it so fascinating. “I talk in high schools and colleges,” Muller shared, “and it’s obvious to me when I get up in front of a classroom, and I talk about this movie, who the kids are who are gonna watch TCM.” He said after showing a scene between MacMurray and Stanwyck, he’d ask one follow-up question. “I say to these high school kids, ‘What do you think this scene is about?’ The gold star goes to the kids who says, ‘Sex.’ I say, ‘Yes. That is exactly what this scene is about.'”

Out of the Past

If Double Indemnity is people trying to get away with a crime, Out of the Past is someone trying to outrun one. Classic tough guy Robert Mitchum plays Jeff Bailey, a gas station owner in rural California, trying to live a quiet life. But the past won’t stay behind him, and soon his former employer Whit Sterling (Kirk Douglas) wants to see him.

Jeff used to be a private investigator who was hired by the rich Sterling to find Sterling’s girl, Kathie (Jane Greer), whom he says shot him and stole money from him. Jeff finds her, but she convinces him to let her go, even run away with her, because that’s what femme fatales do best. Jeff double crosses Sterling but learns Kathie duped him too, leading Jeff to go into hiding. But none of these people are done with Jeff, no matter how far away he runs. 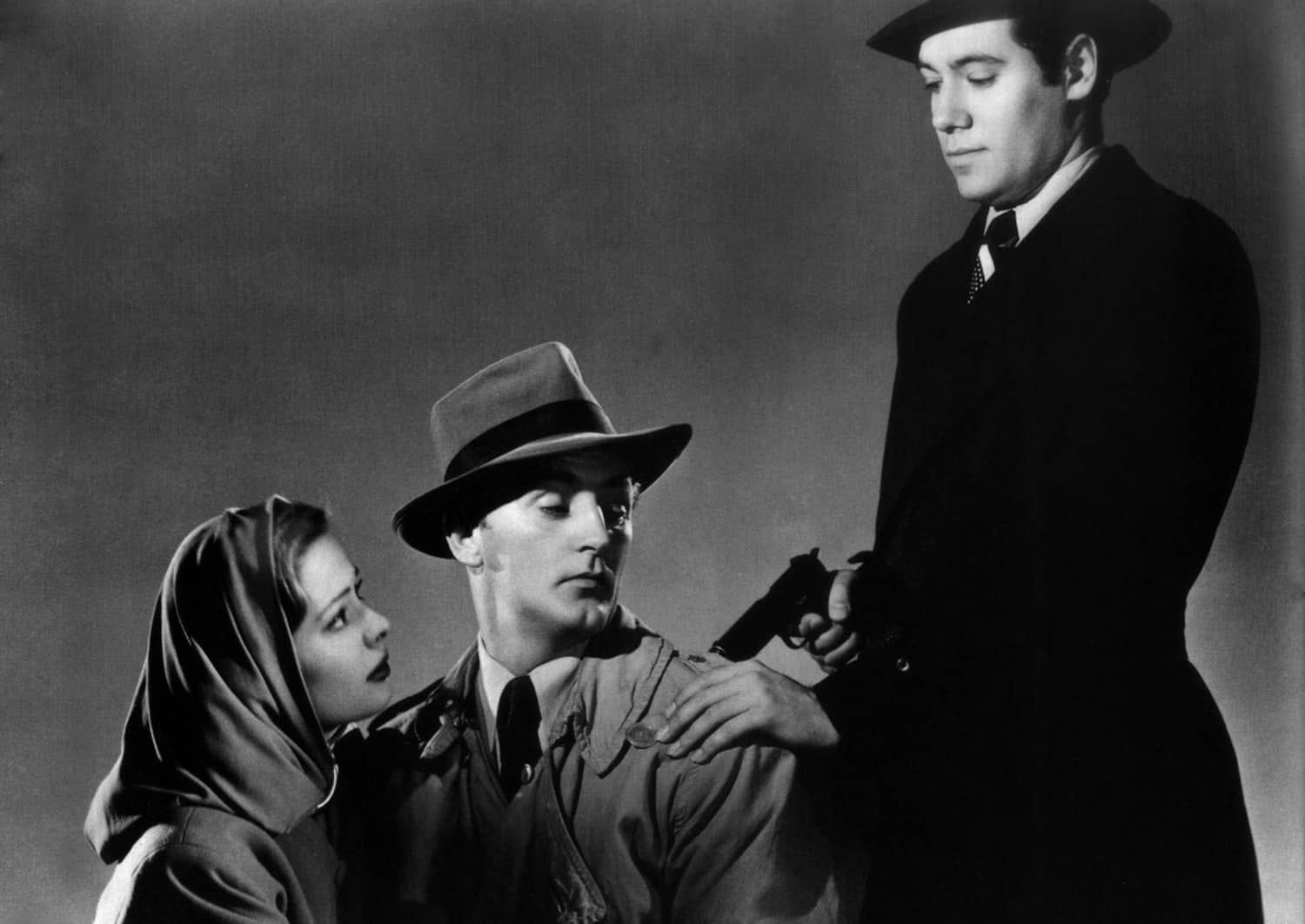 “Out of the Past is unbelievable,” Muller said. “You get the idea of the compromised protagonist, told in flashbacks. I mean, those are just quintessential film noir.” He also shared it’s a movie that has benefited from time, the way so many in the genre have. “This movie that was totally dismissed by critics when it was released. Nobody thought Out of the Past was the greatest when it was made. It was good for the careers of the actors, but nobody was talking about this being some seminal example of a movement in Hollywood. Now everybody holds it up as the greatest film noir ever made.”

So, now you’ve seen Double Indemnity and Out of the Past–where do you go from there? I asked Mr. Muller about a particular favorite of mine, the Fred Zinnemann-directed Act of Violence, and how it’s very much like a proto-slasher movie, of sorts.

“It’s basically a perfect film,” he said. The plot follows an everyman real estate developer (Van Heflin) in California who is haunted by his past. Almost literally. A man who served with him in World War II (Robert Ryan, in one of the most menacing performances ever) stalks Heflin at every turn, with the intent to kill him. But it’s not so simple as that; there’s a reason this man wants to kill our protagonist, and maybe he’s right to. 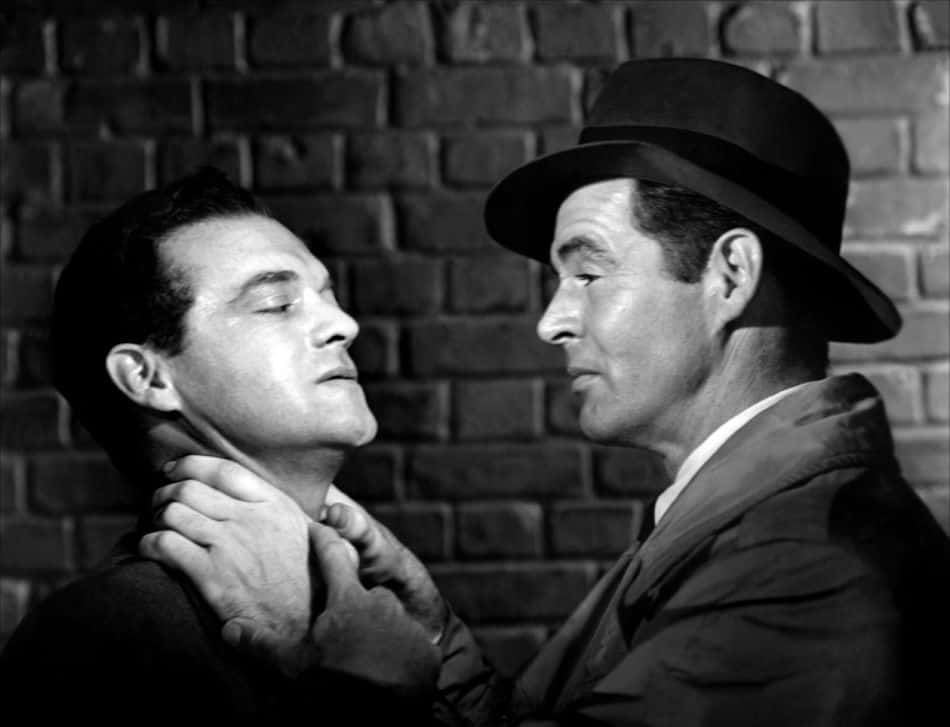 “I think it was spot on for the time,” Muller continued. “It was very timely, it’s got great female characters, which is kind of rare for the genre. I feel it excels in every department. The screenplay is really tight, and beautifully written. The acting is incredible. Robert Surtees’ cinematography is astounding. It just…everything fits into place perfectly in that movie.”

But do all films noir have sad or downbeat endings? Well, sort of. Purists will tell you it’s not a noir if it doesn’t end on a downer, but sometimes that was out of the filmmaker’s control. “The artists make the movie, and very often the studio succumbs to the production code demands,” Muller explained, “and I’m not gonna discount the work of the artists, because they had to tack a happy ending on.”

And some of these happy-ending noirs are great! Take Thieves’ Highway from 1949 directed by Jules Dassin. It follows a war veteran (Richard Conte) who returns home to find his modest Greek immigrant father has been crippled and robbed of his produce, and goes to seek vengeance–through apple shipping of all things–against the strong arming salesman behind it (Lee J. Cobb). 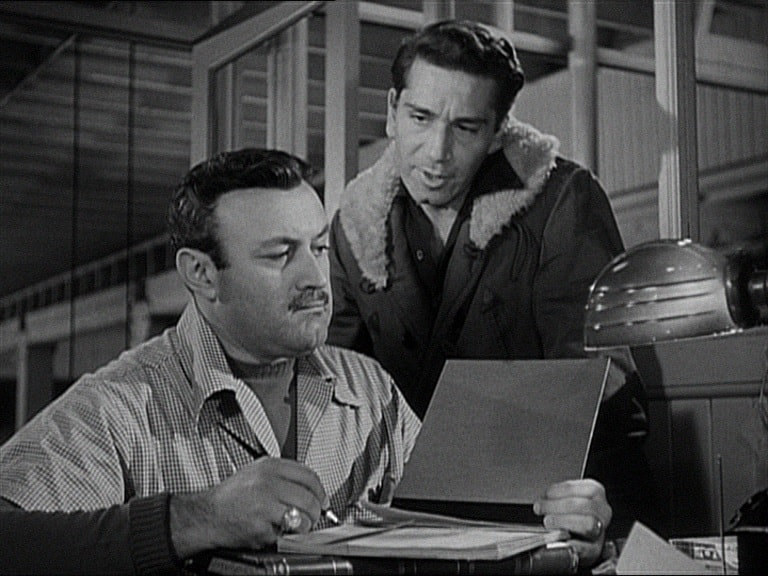 “Thieves Highway was one of the first ones that I loved, and it has a happy ending,” Muller explained. The script and the book do not have a happy ending, and there was no way 20th Century Fox was gonna release that movie. The book ending is experimental because it just ends. It literally just ends with Nick getting in the truck, and grinding the gears, and it’s like, ‘I’m gonna get him. I’m gonna kill him.’ You have no idea what happens after that, it just ends. It’s like an existential novel from the ’70s or something, written in 1948. There’s no way they’re gonna put that ending in a movie.”

So there you go, whether you’re new to noir or an old hand, according to the Czar himself, you should see Double Indemnity, Out of the Past, Act of Violence, and Thieves’ Highway. And if you’re interested in more Film Noir, catch Eddie Muller hosting Noir Alley on Turner Classic Movies, picking up again in September and running every Saturday at midnight.