Warning: This post contains spoilers for Quentin Tarantino’s Once Upon a Time… in Hollywood. It also contains description of the gruesome and tragic events of the Manson Family’s murders.

Spahn Movie Ranch was a 55-acre plot of land in the Simi Hills of Chatsworth, California—just north of metropolitan Los Angeles—a deep fold of beautiful desert nothingness. In its heyday, the verdant, hilly area stood in for the Ol’ Wild West on TV series like Bonanza and The Lone Ranger and in films like Duel in the Sun and The Ramrodder. It was also, for a handful of years, home to the most famous and notorious cult in modern American history: the Manson Family. Their story, and their time on Spahn Ranch, is weaved into the events of Quentin Tarantino’s new feature film, Once Upon a Time… in Hollywood, a sprawling fairy tale about Hollywood in 1969.

Though the movie takes certain liberties with reality, it’s clear Tarantino did obsessive research with regards to the Family. Their personalities and likenesses are eerily reminiscent of the group, which in this film symbolically represent the newfangled culture rotting Hollywood history from its core. Here is a rundown of all of the Manson Family elements that made it into Once Upon a Time… in Hollywood, how true they are to reality, and how they affect and infect Tarantino’s story. 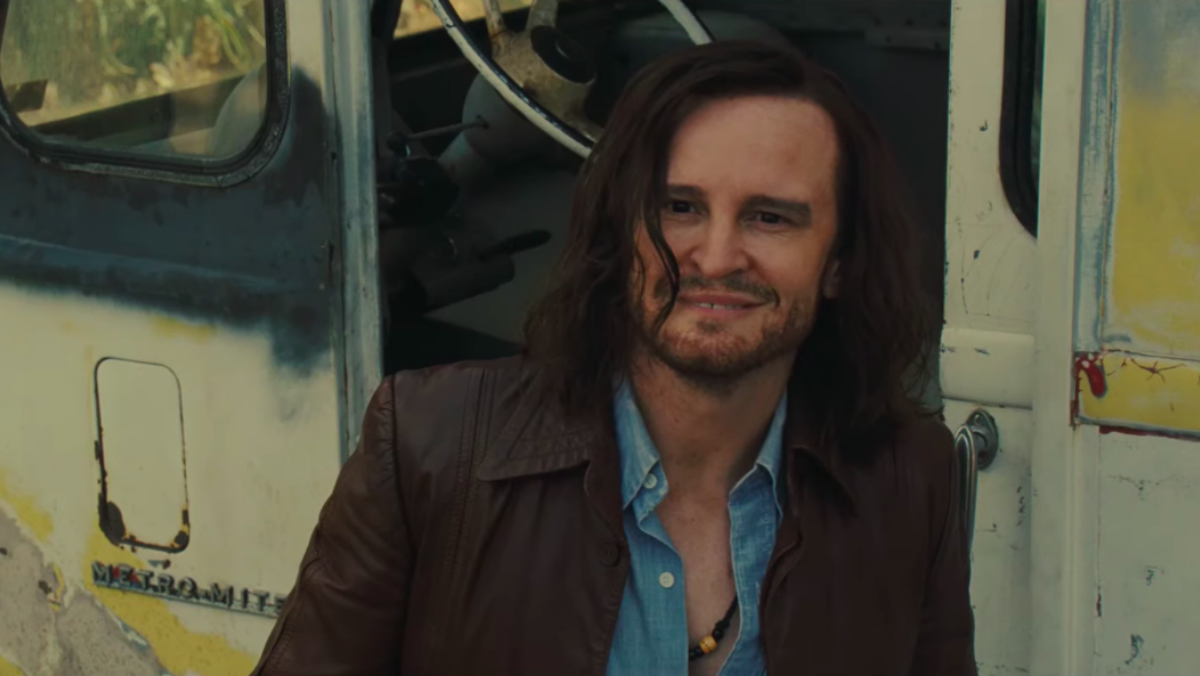 George Spahn (played by Bruce Dern in the film, who replaced Burt Reynolds after the latter passed away) was a real person and the owner of Spahn Ranch, which he purchased in 1953. He populated the land with buildings, sets, and horses, turning it into both a working movie ranch and a horseback riding attraction. Though it was mostly used for TV shows and B-movies, it was a thriving business for Spahn… until the late ’60s, that is. Bad health and old age caught up with the man, who was wooed by the Manson Family.

Spahn let Manson and his followers move into the ranch’s various buildings in exchange for favors, both professional and sexual. He developed a relationship with one of the young girls, Lynnette Fromme (more on her in a bit), who pleasured the old man (who had recently gone blind) in exchange for the Family’s safekeeping. They tended to chores, gave horse-riding lessons to tourists, and mostly kept the place up, but their rampant drug use and free-loving lifestyle meant the ranch fell into disarray.

The Mansons left the ranch after the Tate/LaBianca murders made them targets for police raids, and it burned to the ground in a wildfire in 1970. Spahn died in 1974, and evaded any blame for the Family’s crimes.

When the project was initially announced, the internet shuddered in collective horror at the idea of Tarantino tackling Manson. Haven’t we glorified psychopathic serial killers enough? What value can be found in mining tragedy for money? But others wondered if Manson would actually be a figure in the story, or would instead be more of a glorified cameo à la Hitler in Inglourious Basterds—a terrifying real-life figure made ridiculous from a revisionist perspective.

The end result was neither, really. Manson is barely in the movie at all, with Damon Herriman’s turn as the crazed killer reduced to less than a minute of screentime. The brief moment we do see is contentiously accurate. As Cliff Booth (Brad Pitt) fixes the rooftop antenna of his boss and friend Rick Dalton (Leonardo DiCaprio), he spies a tiny, long-haired hippie man pestering neighbor  Sharon Tate (Margot Robbie) and her visitor Jay Sebring (Emile Hirsch). The man is Manson, and we hear him ask if someone named Terry Melcher is home. Sebring tells him that Melcher doesn’t live in the house anymore, and Manson leaves, but not without catching a look at Sharon Tate.

In real life, Terry Melcher (son of actress Doris Day) was a music producer whom Manson tried to persuade to give him a record deal. When Melcher refused, essentially icing Manson out of his life, Manson orchestrated a retaliation on the house. Though he masked the planned crimes as political upheaval in the name of a race war, in reality they were more likely the tragic results of a bruised ego. As for Manson spotting Tate, there are various stories about him poking around the house before sending his Family there on the evening of August 8, 1969; some even have him interrupting a photoshoot with Tate on the front lawn. We’ll never know for sure the accuracy of these claims—many folks fabricated stories after the murders—but Once Upon a Time… in Hollywood imagines a reality where their fates did cross, though far less tragically. 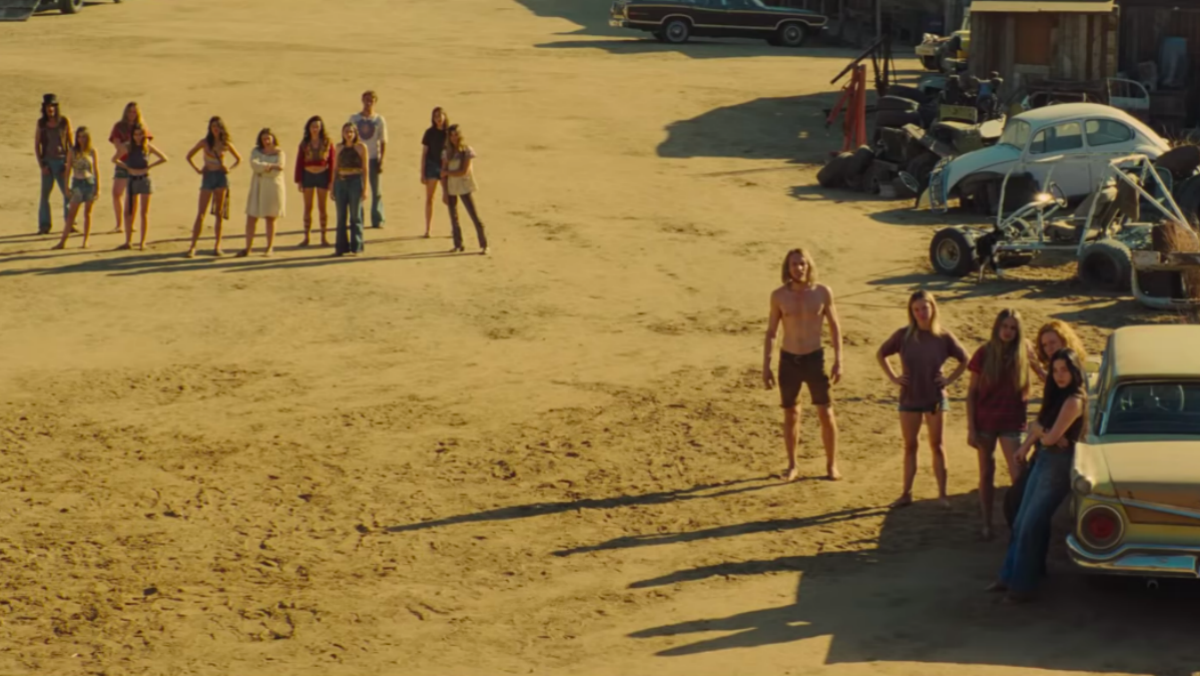 Early in the film, Cliff spots a pretty hippie girl named Pussycat (Margaret Qualley) on the streets of Los Angeles, hitchhiking, dancing, and digging through trash receptors for food. (She and the other Manson girls are heard singing the song “ Always Is Always Forever,” which is a real song Charles Manson wrote.) They begin a faraway flirtation, until one day he decides to pick her up. She’s headed to Spahn Ranch, and he drives her there. Due to his work as a stuntman, he’s familiar with the premises and knows George personally, so he heads there with the intention of saying hi to an old friend. But when he arrives, he realizes the ranch is littered with a few dozen scantily clad young people, who watch reproachfully as Cliff enters George’s home.

We’re introduced to several of these people—who, we quickly learn, are the Manson Family—and most of them are based directly on real people. Lena Dunham plays a character named Gypsy, the real-life moniker for Family member Catherine Share. James Landry Hébert plays Clem, real name Steve Grogan, the Family member who puts a knife in Cliff’s car tire; in reality, Clem was a severely drug-addicted right-hand man of Charlie’s who later worked with police to expose the Family. The Haunting of Hill Houses‘ Victoria Pedretti has a bit role as a girl named Lulu; in real life, that was the nickname of Leslie Van Houten, who helped murdered Rosemary LaBianca and is one of the Manson girls still in prison for her crimes. And then there’s Dakota Fanning as Lynette Fromme, nicknamed Squeaky, who remains one of the Manson Family’s most terrifying members. She was pledged to Charlie’s cause long after the Tate/LaBianca murders, and might still be—her current whereabouts and motives are unknown. But she made headlines for another crime in 1975, at which point she attempted to assassinate President Gerald Ford. She went to prison for more than 30 years, but was released in 2009.

Pussycat, on the other hand, is a fictional Manson girl, although she appears to be the amalgamation of a few different members. Her name sounds most like Kathryn Lutesinger, who was nicknamed Kitty Cat by the family, but her persona and looks line up more directly with Ruth Ann Moorehouse, who went by Ouisch. She was one of the youngest and most attractive members of the Family, who Charlie sent into the city to lure men with money to the ranch.

The most notorious Family members show up in the third section of the film, on the night of August 8, 1969. Although their fates play out much differently in Tarantino’s version of reality, their names and personalities remain in tact. Austin Butler plays Tex Watson, the most notorious Family member after Charlie; he led the attack on the Tate home that fateful night, and is the one who stabbed a pregnant Sharon Tate to death. In Once Upon a Time… in Hollywood, though infiltrating Dalton’s home instead of Tate’s, he repeats a line he said to his victims in real life: “I’m the Devil, and I’m here to do the Devil’s work.”

The two other killers sent to the house are “Katie” (Madisen Beaty) and “Sadie” (Mikey Madison). These are the Family nicknames for Patricia Krenwinkel and Susan Atkins, who helped slaughter Tate, Sebring, and three houseguests: Abigail Folger, Voytek Frykowski, and Steven Parent. In the film, they’re killed by Booth and Dalton, with Sadie flayed to death by a flamethrower. This comes with an added dose of catharsis when you take the real-life Atkins into account. In reality, when Sharon Tate begged for the life of her unborn child, Atkins told her, “Look, bitch, I don’t care a thing about you.” Those were likely the last words Tate ever heard. Krenwinkel was responsible for stabbing Folger to death, and was involved in the LaBianca murders—along with Watson and Atkins—the following night. (Fun fact: This is the second time Beaty has played Krenwinkel; she also took on the role in the TV series Aquarius, opposite David Duchovny.)

There’s another Family member along for the ride that night, who flees the scene before the events unravel. In the credits, she’s listed as “Flower Child,” although she’s likely a stand-in for Linda Kasabian, who drove the others to the Tate residence that night but committed no murders and later testified against them in court, essentially unraveling the case and sending Charlie and the others to prison forever. She’s played by Maya Hawke, who is the real-life daughter of Uma Thurman, well-known for her own work with Tarantino in Pulp Fiction and Kill Bill.

TAGGED: Charles Manson, Once Upon a Time in Hollywood, Sharon Tate